Tokyo 2021: Soufiane El Bakkali gives back its letters of nobility to Moroccan athletics

Moroccan athletics regained its splendor thanks to the victory of Soufiane El Bakkali, crowned Olympic champion in the 3,000 m steeplechase in Tokyo. In the absence of Conseslus Kipruto, the original athlete ... 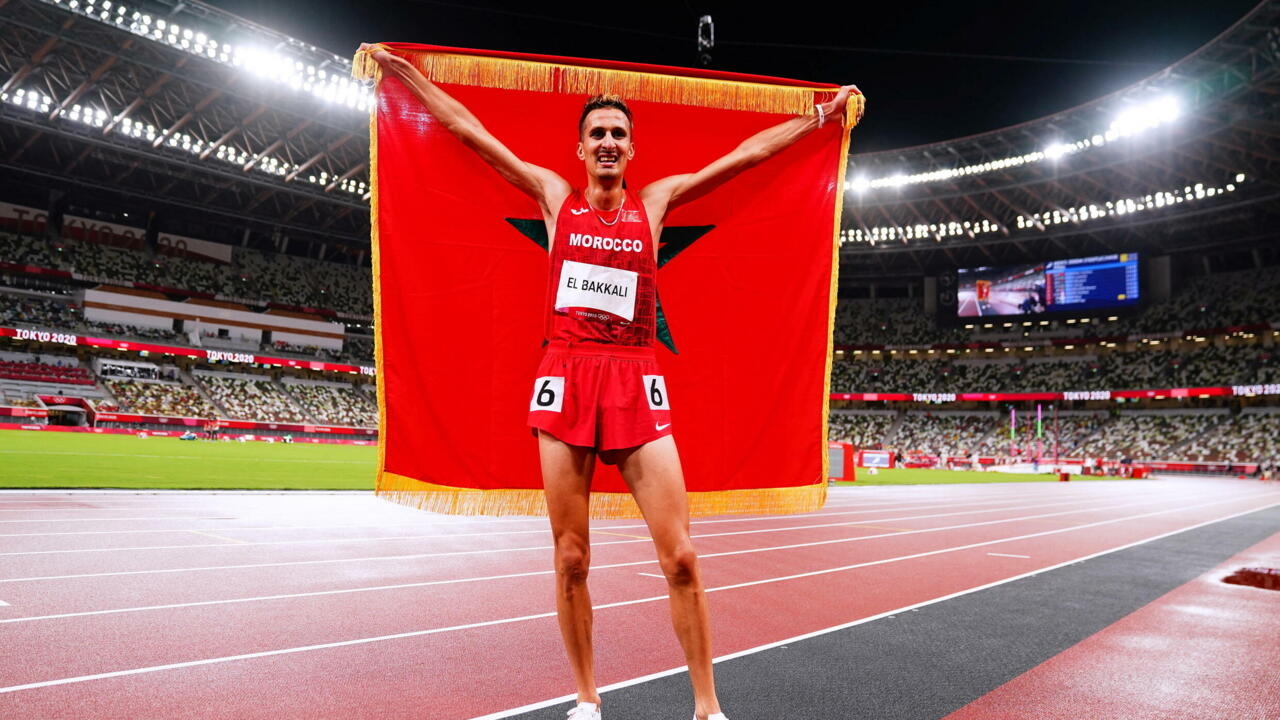 Morocco has been waiting for this for a long time. Soufiane El Bakkali became, Monday August 2, the first Moroccan gold medalist at the Games in all sports since the legend Hicham El Guerrouj in 2004. The athlete dominated the final of the 3000 m steeplechase by leading in 8 min 08 sec 90 the Ethiopian Lamecha Girma (8'10''38) and the Kenyan Benjamin Kigen (8'11''45) to succeed the Kenyan Conseslus Kipruto, absent this year. With this victory, he ended Kenya's incredible domination of the distance, after nine consecutive Olympic titles since 1984.

"I am proud of this result which comes after a lot of work. I absolutely wanted to make a medal at the Olympic Games in Tokyo. What medal? I did not know. But now I know it," smiles the winner.

"I am all the more proud that I won a race against the specialists, the Kenyans", he declared after his race at the microphone of RFI.

🎥 Relive in video the coronation 🥇 of our champion Soufiane EL BAKKALI on 3000mSC at the Tokyo Olympics 🇯🇵.

An unstoppable end of the race

In the aftermath of this success, Moroccan newspapers did not fail to salute this performance, as described by the site le 360 ​​° sport. Al Ahdath Al Maghribia thus titled "A Gold Champion" by putting the middle distance specialist in the spotlight. For Assabah, "Soufiane El Bakkali saved the honor of Moroccan athletes and Moroccan participation in these Olympics", while Al Massae insists that the champion "made the Moroccan public forget the previous failures".

No world star from the kingdom had indeed managed to emerge lately, unlike the golden age of Moroccan athletics embodied by illustrious figures such as the "legend" Saïd Aouita (5000 m) and Nawal El Moutawakel (400m hurdles), crowned at the Los Angeles Olympics in 1984, or Hicham El Guerrouj, double Olympic champion in 2004 over 1500m and 5000m and still holder of the world record for the 1500m (3'26''00). Morocco's last podium in athletics at the Games dates back to 2012 in London with the bronze won by Abdalaati Iguider in the 1500m. In addition to its poor performance, Moroccan athletics has also seen its reputation tarnished by doping cases.

Soufiane El Bakkali made us forget this period of famine by achieving a perfect final.

It was the Ethiopians who nevertheless raced and accelerated the tempo after a first kilometer of observation on a wet track, a few minutes after a long and intense rainy passage.

Lamecha Girma, the reigning vice-world champion, was rewarded for his work at the front of the pack by clinching silver, but he was easily overwhelmed by Soufiane El Bakkali in the last 200 meters, Kenyan Benjamin Kigen taking the lead. 3rd place at a good distance.

The runner from Fez comes from a modest family. As a teenager, he was noticed by the athletics section of the Fez Country Club during a major detection operation intended exclusively for 3,600 schoolchildren in the popular district of El Merja. In 2013, he joined the Mohammed-VI International Academy of Ifrane.

Three years later, he revealed himself at the age of 20 at the Olympic Games in Rio where he took 4th place.

Since then, he has continued to improve, as described on the official website of the Olympic Games.

In June, he took the start of his favorite distance at the meeting in Rome alongside a certain Conseslus Kipruto, Olympic champion in Rio and holder of the Olympic record of 3,000 m steeplechase.

He finished second in the race just behind Kipruto and improved his personal best eight seconds to his best mark at 8:05:07.

The following month at the Rabat meeting, he beat Kipruto and once again improved his personal best.

Then during the World Championships in London, he became vice-world champion in the distance, before winning bronze in Doha in 2019.

"From the height of his 191 cm, he is one of the greatest runners in the 3000 m steeplechase on the circuit. A definite advantage for passing the hurdles and which allows the Moroccan to stay in contact with the masters of the discipline, the Kenyans, smaller but more enduring ", specifies the site of the Olympic Games. "If we were to design the perfect morphology for an elite 3,000m steeplechase runner, Soufiane would be exactly what to look for," also explained Professor Greg Whyte, sports scientist in charge of a study at the Manchester Institute of Health and Performance for the Olympic channel "Anatomy of" series.

The Moroccan athlete was able to count on his extraordinary physique, but also on strict preparation.

In addition to respecting the health bubble that protects athletes from contamination with Covid-19, Soufiane El-Bakkali's coach also imposed a social bubble on him by cutting him off from all social networks.

At 25, his worthy successor still has the future ahead of him.