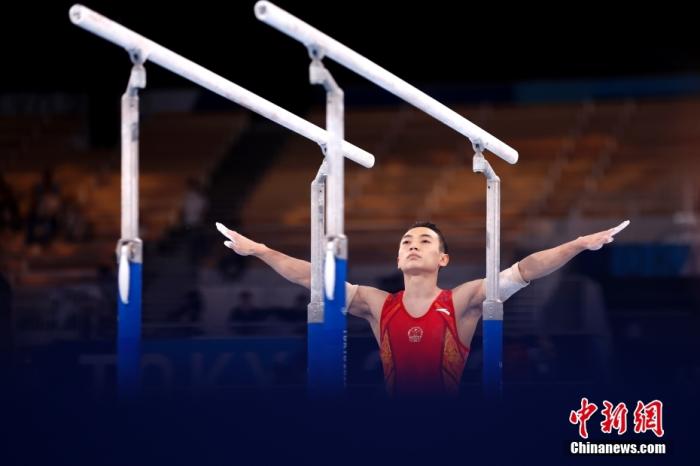 11 days after the Tokyo Olympics, the Chinese Army still topped the list, with 32 gold medals surpassing the second-placed American team by 8 and the Japanese team with 19 gold medals ranked third.

Gymnastics "turn over" to collect two golds, diving, and pick up gold and silver

The Chinese gymnastics team, which has not seen a gold medal in the early stage of the competition, "post-stop", won 2 gold and 1 silver on the closing day of the gymnastics competition.

In the men's parallel bars final, the two-time World Championship champion Zou Jingyuan won the gold medal with a high score of 16.233, which exceeded the silver medalist and the German player by more than 0.5 points.

Another Chinese player, You Hao, ranked fourth and missed the medal with a slight disadvantage.

In the Rio Olympics, the Chinese gymnastics team received no money.

The Chinese gymnastics team, which won 3 golds, 3 silvers and 2 bronzes in this Olympics, fulfilled its promise of "fighting a turnaround" before the competition, and its number of gold medals and medals ranks first among the participating teams.

On August 3, local time, in the men's singles 3-meter springboard final of the Tokyo Olympics, Chinese player Xie Sisi was crowned the Olympic champion for the first time with 558.75 points.

The picture shows Xie Sisi in the game.

The diving competition continued with the Chinese team's "exhibition match", taking the men's 3-meter springboard championship and runner-up-Xie Sicheng led the way and won the gold medal, followed by Wang Zongyuan to win the silver medal.

In the track and field on the 3rd, the Chinese team not only won the silver medal, but also made two breakthroughs.

In the women's hammer throw final, 33-year-old veteran Wang Zheng won the silver medal with a score of 77.03 meters.

This is the third silver medal for Chinese women's hammer throw in the Olympic Games after Zhang Wenxiu won the silver medal in the Beijing and Rio Olympics.

In the women's 800m final, Wang Chunyu ranked fifth with 1 minute 57 seconds, creating the best result of the Chinese team in this event.

On August 3, in the women's 800m final of the Tokyo Olympics, Chinese athlete Wang Chunyu finished fifth in 1 minute and 57 seconds.

The picture shows Wang Chunyu in the game.

In fact, in the women's 800m semi-finals, Wang Chunyu reached the final with a time of 1:59.14. This has achieved a breakthrough and has rewritten the history of no Chinese athletes qualifying for the women's 800m finals.

The men's 200m preliminaries and semi-finals were held on the same day.

In the preliminaries, Xie Zhenye advanced to the semi-finals with his personal best time of 20.34 seconds and became the first player in the history of the Chinese Olympics to run into the men's 200m semi-finals.

Later, although Xie Zhenye missed the final in 20.45, he still made history.

The men's 110-meter hurdles started on the 3rd, and Liu Xiang's junior brother Xie Wenjun advanced to the semi-finals on the 4th with 13.51 seconds.

On August 3, in the men's 1000-meter double rowing final of the Tokyo Olympic Games that just ended, the Chinese combination Liu Hao/Zheng Pengfei won the runner-up in 3:25.198.

The picture shows Liu Hao and Zheng Pengfei in the game.

In the men’s 1000-meter double rowing final, which carried the Chinese canoeing team’s high hopes, Liu Hao/Zheng Pengfei, the Chinese player and World Championship champion, led the way for the most part of the race. At the last moment, they were overtaken by the Cuban team, with 0.2 The slight disadvantage of the second is the runner-up.

Nevertheless, this is the first time that the Chinese canoeing team has won an Olympic medal after 13 years.

After the game, both Liu Hao and Zheng Pengfei expressed regret, saying that they came to Tokyo for the gold medal, and now they feel the cruelty of competitive sports.

The U.S. team leads the semi-finals of the men's basketball team

The men's football field held two "ultra-long" semi-finals on the 3rd, and the two games were decided by overtime and penalty kicks.

Both the Japanese team and the Spanish team are the favorites of men's football in this Olympics. The two teams met in the semi-finals and were considered to be the finals ahead of schedule.

As a result, the two sides fought hard for 120 minutes and tied 0-0. In the end, the Spanish team beat the host 1-0 in overtime.

In the other semi-final, Brazil and Mexico also battled 0:0 within 120 minutes. In the end, Brazil won 4:1 on penalty kicks and met with Spain in the final.

The men’s basketball quarterfinals kicked off on the 3rd. The United States, which has achieved three consecutive Olympic titles, eliminated the 2019 World Cup champion Spain 95:81 and will face Australia in the semifinals. The other semifinals will be Slovenia and France. Between. (Finish)