(Tokyo Olympics) Chinese women's basketball team won three consecutive victories to advance to the quarterfinals Shao Ting: I believe they can play better   China News Agency, Tokyo, August 2nd. The Chinese women's basketball team defeated the European powerhouse Belgium 74:62 in a battle for the first place in the group on the 2nd, thus advancing to the quarter-finals with a record of three wins 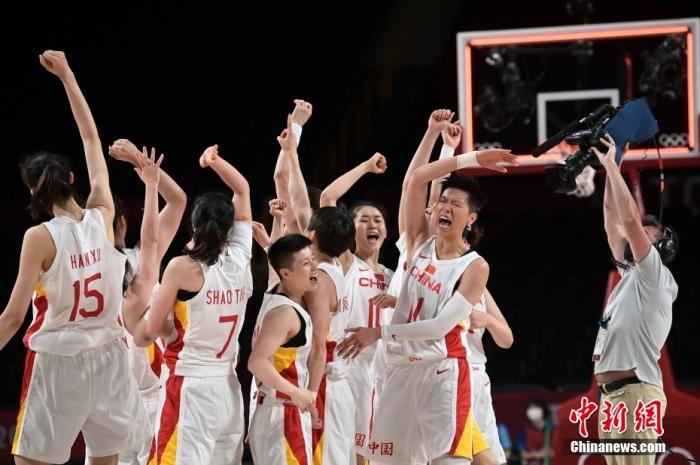 China News Agency, Tokyo, August 2nd. The Chinese women's basketball team defeated the European powerhouse Belgium 74:62 in a battle for the first place in the group on the 2nd, thus advancing to the quarter-finals with a record of three wins in the group. .

After four quarters of fierce competition, the Chinese team won 76:74 narrowly, achieved two consecutive victories and advanced to the quarterfinals.

The picture shows the women's basketball players celebrating their victory.

After defeating the world's second-ranked Australian women's basketball team in the last game, the Chinese team has actually qualified from the group ahead of schedule.

This campaign faces the Belgian team, and the two teams are vying for the first place in the group, thus avoiding the United States and Spain in the knockout stage.

This campaign can be called the most difficult matchup for the Chinese team since the start of the Olympic Games.

The lagging Chinese team adjusted their tactics in time. Coach Xu Limin asked the players not to blindly play the pick-and-rolls, but to use Li Yueru's inside line to contain them, and outside players to intersperse to attack.

This trick really worked, and the Chinese team took advantage of the inside in the next quarter to achieve a lead with 38:37.

In the last two quarters of the game, the Chinese team’s defense was very tough, completely cutting off the connection between the Belgian team’s strong points and their teammates. On the offensive end, if the Chinese team’s internal attack was blocked, the outside line would stand up in time. This campaign was nearly 50%. % Of the three-point shooting rate has repeatedly stabilized the Chinese team.

Xu Limin asked the players to "strengthen the breakthrough with points." The Chinese team then gradually widened the points difference. The offensive from high and low positions was even more prosperous, and finally won the game with 74:62, thus winning all three games and the group. The first result is among the top eight.

Shao Ting said in an interview after the game that before the game, the Chinese coach Xu Limin warned his players to enjoy the game, because the Chinese team has not participated in international competitions for nearly a year. This turned out to be a good thing. Cherish and enjoy the opportunity of the game very much".

Shao Ting said that the result of ranking first in the group will help the Chinese women's basketball team to build confidence. "The next quarter-finals are bound to be very difficult, because every team wants to go further in the Olympics. So. The confidence that this game has built for the Chinese team makes us believe that we can play better." (End)