Tokyo Olympics: Swimming ends, why does a pool of water "stay"

China News Service, Tokyo, August 1st, title: Swimming ends, why does a pool of water "stay"   China News Agency reporter Zhang Su   At the beginning of August, the Tokyo Olympic swimming competition came to an end.   Swimming is not only a "veteran" event of the Summer Olympics, it is also a big gold medalist. The pool water witnessed the highlights or valleys of the athletes, laughter and c 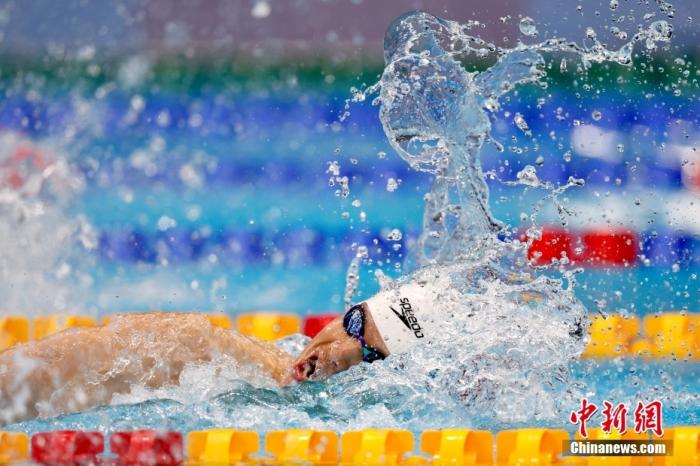 At the beginning of August, the Tokyo Olympic swimming competition came to an end.

Swimming is not only a "veteran" event of the Summer Olympics, it is also a big gold medalist.

The pool water witnessed the highlights or valleys of the athletes, laughter and cry.

There is no doubt that the gold medalist is the most watched.

Among them, there are players who have reached the top in many world competitions including the Olympics, such as the American "nuclear girl" Ledkey, who has won 7 Olympic gold medals, the defending champion who has remained undefeated in the competition for more than 7 years, and the British "Frog King" Pitti; there are also blockbuster rising stars, such as Australian Titmus, who collected all the colors of the medals on his first Olympic trip, and Tunisian teenager Hafnawi who created the "side miracle".

The once "frustration" may become "poetic."

Wang Shun, the "three dynasty veteran" of the Olympic Games, put down his first Olympic gold medal and held the gold medal in his hand. He said it was heavier than he thought.

Zhang Yufei, who had no harvest in Rio, took two gold and two silver, and she hung them all on her chest, "pain" and happy.

On July 30, local time, in the men's 200-meter medley final of the Tokyo Olympics, Chinese player Wang Shun won the championship in 1 minute and 55 seconds. After winning the bronze medal at the Rio Olympics, he successfully reached the highest podium.

This is also the first gold medal won by the Chinese swimming team in the men's event of the Olympic Games.

What is exciting are the records born here.

"Faster" is the common pursuit of these people who are the fastest in the world today.

As well as the men's and women's 4×100-meter medley relay, the British team beat China and Australia to create a new world record and tournament record.

In Tokyo, the women's 100-meter backstroke event record looks like a "fragile item". It has been rewritten 5 times, and all the players on the podium have made contributions.

On the last day of the competition, the scene was still cheering for the new world record and Olympic record.

Even if the contestants fail to continue writing the "myth", they can still afford praise and blessings.

The Swedish star Scherstrom, who holds many competition records, was injured and failed to reach the highest podium, but he was defeated.

Not to mention the host player Chijiang Lihuazi, she has already succeeded when she walked out of the ward and returned to the arena.

Maldini from the refugee delegation is the last one, but what does it matter?

As the "hope of the suffering motherland", she has gone against the current, not to mention that her performance has improved significantly compared with five years ago.

Of course, the competition is not a "one-man show", mutual achievement often makes the medals more beautiful.

McNeill from Canada overtook the women’s 100-meter butterfly final at the last minute, and only touched the wall 0.05 seconds faster than the army, which is a bloody scene.

Ledkei and Titems cherish each other, and praise each other every time they mention each other.

Surrounded by powerful enemies, South African player Schoen Markle won the championship and set a world record. The opponent who rushed to hug her was even more excited than her.

As Chinese swimmer Yan Zibei said at the press conference after the game, opponents on the court and friends off the court.

The word "more united" written into the Olympic motto is interpreted in this pool of clear water.

The picture shows the Chinese team members after the game.

It is true that the noise is still there, some players questioned the "unclean" of the game, and some media insinuated "hype."

But we must see that more athletes have shown their anti-doping and united attitudes.

Piti led the team to hug and salute the Chinese players as soon as they won the championship. The "World Frog King" and the "Asian Frog King" looked at each other and smiled, making the so-called "war" no longer cruel.

Dust returns to dust, soil returns to soil. As the swimming competition ends, when coaches and athletes from various teams are still taking photos in the stadium, the buoy lines have been quickly rolled up by the staff.

Here will be converted into a synchronized swimming competition arena.

Why does a pool of water "stay"?

It is the past 9 competition days, and the days and nights spent to be able to participate; it is more than a hundred medals, and all the money paid to obtain medals; it is 6 world records and 20 Olympic records, and to break these past The opening prologue.

On this day, the winner of the last competition held a "flag" while traveling around the stadium, with the words "Thank you, Tokyo" written on it in English.

At that moment, the broadcast said, "See you in Paris."