Anastasia Pavlyuchenkova and Andrei Rublev won gold medals in mixed doubles at the Olympic Games in Tokyo. In the final, the fourth seeded in a super tie-break defeated compatriots Elena Vesnina and Aslan Karatsev. In turn, Karen Khachanov lost to Alexander Zverev in two sets and won silver in the men's singles category, while Czechs Barbora Kreichikova and Katerina Sinyakova took first place in women's pairs. 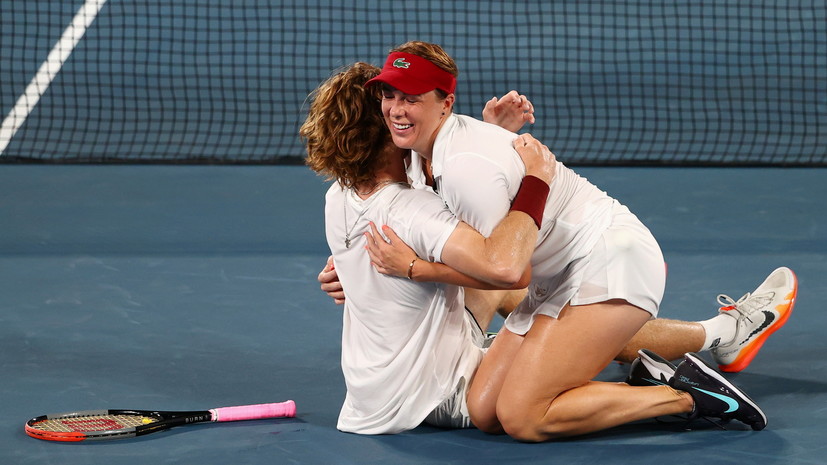 On the final day of competition, three gold matches took place at the Olympic tennis tournament. And the last two - mixed doubles and men's singles finals - were of particular interest to domestic fans. In the first, Anastasia Pavlyuchenova and Andrei Rublev fought with Elena Vesnina and Aslan Karatsev, and in the second, Karen Khachanov had a chance to write his name in history. Moreover, his rival, although he represented Germany, was also related to Russia. Alexander Zverev was born into a family of Soviet tennis players and speaks fluent Russian.

On the eve of the final, it was Zverev who was considered the favorite. In the ATP rankings, he was in fifth place - 20 positions higher than Khachanov, had much more experience in participating in decisive matches (the US Open final, the Australian Open semi-finals and Roland Garros), and could also boast of a victory over Novak Djokovic himself in the Olympic semifinals. tournament. However, in light of the Serb's defeat by Pablo Carreño-Busta and reports of a shoulder injury, this line in the resume seemed less impressive. In addition, in the face-to-face confrontation, Karen was not only not inferior to Alexander (2: 2), but also gained the upper hand in the last two meetings. However, almost two years have passed since the Russian's success at the Masters in Montreal.

And the final of the Tokyo Olympics was strikingly different from the meeting on the Canadian courts. If then the Russian did not lose a single game on his serve, then this time he almost immediately allowed the enemy to make a break. Already in the third game, Zverev turned on maximum speed, for which Khachanov was not ready. No, he was not wrong, but he did not keep up with the fifth racket of the world, missing one attack after another. Apart from the aces, Karen scored only one actively won ball for the first set - negligible compared to Alexander's nine. And the twofold difference in the number of unforced errors (4: 8) was just a small compensation.

With the score 3: 5, Khachanov allowed Zverev to make a break for the second time, but at first it might seem justified. There were very few chances to catch on in the first game, so it was hardly worth spending extra energy on a possible chase. But in reality, everything turned out to be much worse. Karen finally lost the thread of the game and lost five games in a row at the start of the second set. In the attack, as before, nothing worked, and when the sharpness in the serve disappeared, everything became completely sad. When the first ball hit, the Russian was stronger only in 56% of the rallies, and at the reception he was completely powerless, taking only four points out of a possible 20.

At a certain point, Khachanov even began to look for help from compatriots who were in the stands, but neither the President of the Russian Tennis Federation (RTR) Shamil Tarpishchev, nor the coach of the national team Igor Kunitsyn could help him turn the tide of the final match.

Karen only had enough to break the score and not lose the second set dry.

The Russian lost 3: 6, 1: 6 and became the silver medalist at the Tokyo Games.

I was ready, I was training.

Thought the pitch might help me, but she walked here and there.

There is nothing more to say.

Each match is a separate story.

He served well, from start to finish he had a great match.

Each match can go according to a different scenario, this match was better, "- quotes Khachanov" Championship ".

It is worth noting that Khachanov, on his way to the finals, spent 20 games and 127 minutes more than Zverev on the Tokyo courts, which, among other things, could affect his physical condition in difficult conditions.

Among other things, according to the athlete himself, he was also prevented from demonstrating his best tennis, the shouts of protesters near the arena.

Although the numbers and words after the match no longer have any meaning, especially with such an undistinguished game after a day of rest.

In mixed doubles, one of the main intrigues was whether Vesnina would be able to recover from yesterday's failure in doubles and become a two-time Olympic champion. And there were prerequisites for this. At least based on how confident Elena and Aslan were moving towards the final. During the tournament, they did not concede a single set, while they managed to knock out the first seeded Nicolas Mayu and Christina Mladenovic from the fight, as well as upset the star Polish Iga Svyontek and the first racket of the world in singles Djokovic. Pavlyuchenkova and Rublev, on the other hand, never did without a super tie-break and usually swayed for a long time. In two of the three matches played, they lost the first game, after which they were forced to catch up.

This time Andrei and Anastasia started the meeting again unevenly and allowed the rivals to make a break, but in the shortest possible time they not only restored parity, but also took the lead with a comfortable difference. Not without the help of Karatsev, who failed the first set and chalked up the lion's share of mistakes. If we take into account not only unforced ones, but also those allowed under pressure, then Elena and Aslan “surpassed” their opponents by more than two times (27:12), and this despite the fact that the difference in actively won balls was negligible - 4: 2. Pavlyuchenkova and Rublev took advantage of the gift and confidently took the party.

The second set turned out to be non-standard for the mixed. For two, the rivals earned only two break points, none of which were realized. Perhaps the reason was largely in the sharp reduction in marriage between Vesnina and Karatsev. While the first had 13 unforced errors, the second had only six. All this led to a tie-break, in which Pavlyuchenkova and Rublev lacked a little luck. This mainly concerns Andrey, who has punched the rope several times. In the end, it even caused him to burst into an angry tirade.

As a result, the winner of the gold was determined in a super tie-break, where Pavlyuchenkova and Rublev had great experience. If in all three cases they turned out to be stronger than their opponents, then Karatsev did not have such experience at all, and Vesnina lost twice - albeit in doubles. Nevertheless, it was Elena and Aslan who more confidently carried out the starting segment and took the lead with a score of 7: 4. But as well as on the eve of Vesnina, it was not possible to walk the entire distance exactly. Anastasia and Andrey seized the initiative and took the next five rallies, thanks to which they earned two match points.

However, it was not possible to finish the final in their favor right away.

Vesnina and Karatsev desperately resisted and were able not only to recoup three times, but even to get ahead once.

Thus, Anastasia and Andrei actually atoned for their failures in singles.

Especially the last one, tirelessly calling himself a loser after each match in the mixed doubles until the final.

In the final of the women's doubles, there was no particular fight.

Belinda Bencic was unable to win two gold medals of the Games and, together with Victoria Golubich, lost to Czech women Barbora Kreichikova and Katerina Sinyakova.

At the same time, the fight was only in the first set, and in the second the Swiss finally fell down and took only the game - 5: 7, 1: 6.