Primary school physical education teacher held the 18th mock Olympics Zhou Chenguang, a physical education teacher at Yangfangdian Central Primary School, made his own simulation equipment, simulated the opening ceremony and other links, and held the mass mini Olympic Games on campus   In 2002, on the eve of the first simulated Olympic Games in Yangfangdian Central Primary School, Zhou Chenguang 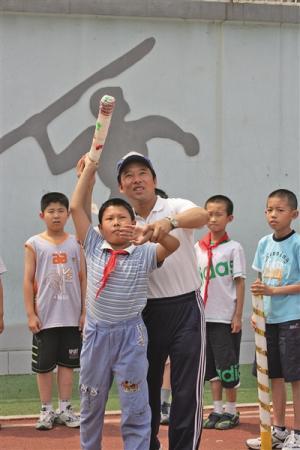 Zhou Chenguang, a physical education teacher at Yangfangdian Central Primary School, made his own simulation equipment, simulated the opening ceremony and other links, and held the mass mini Olympic Games on campus

In 2002, on the eve of the first simulated Olympic Games in Yangfangdian Central Primary School, Zhou Chenguang taught students how to throw a soft javelin in a physical education class.

Since Beijing’s bid to host the Summer Olympics, the Beijing Yangfangdian Central Primary School will host the mock Olympics as scheduled in the last week of the end of April every year. Up to now, 18 mock Olympics have been held.

This is Zhou Chenguang, a physical education teacher at Yangfangdian Central Primary School, who has thought about the answer to the question "How can children participate and enjoy the happiness of the Olympic Games?"

In addition to being a physical education teacher, he is also a member of the Beijing Winter Olympics propaganda team and a disseminator of Olympic education.

He said, "The four-year Olympic Games will not be held in China every year, but this Olympic spirit needs to be passed on in China."

852 students and teachers participated in the torch lighting session

Beijing News: How did you come up with the idea of ​​combining physical education with the Olympics?

Zhou Chenguang: As a physical education teacher in Yangfangdian Central Primary School, I want to use more creativity to lead young people to participate in happiness, grow up in happiness, and enjoy the Olympics in happiness, so that more children have the opportunity to play in the field of life. To success.

The Olympics is the most important sports event in the world. It is said that there is a certain distance from us. I was wondering how to let the school children participate, feel the spirit of the Olympics, and enjoy the joy of the Olympics.

In July 2001, Beijing was in the process of bidding to host the Olympics. After I met Professor Pei Dongguang, I learned a lot about the Olympics from him. Gradually, the idea of ​​launching a simulated Olympics gradually came to my mind. Produced in.

Beijing News: What unforgettable experiences did you have in the simulated Summer Olympics?

Based on the premise, the 852 children in our school have a very complete understanding of the Olympics as a whole.

Next, we organized the competition. We made soft javelins for them with the inner tube of the tires and foam, and made the discus with waste paper shells and tape. At the same time, in order for the children to understand the official rules of the game, we gave the children A colorful door frame was made and imitated the opening ceremony of the Olympic Games to let the children carry on the torch relay. A large torch platform was also made with a flame height of 1.5 meters.

When the flame was ignited, 852 children and nearly a hundred teachers from the whole school participated. It was a jubilant scene that I had never seen in any sports games in the school since I worked for ten years. It was unforgettable. of.

In addition to the opening ceremony, we also held a closing ceremony. Since it is a competition, there will be an awards ceremony.

We found boxwood on the side of the road and the leaves of willow trees to weave olive wreaths for the children. We also invited the teacher who was doing Olympic sculpture at that time. The children were almost free to make simulated Olympic medals and made them into a relief effect. Then it is matched with a Chinese knot, which perfectly combines the original Greek Olympic Games with our Chinese cultural characteristics.

In addition, we issued relevant certificates to each child, as well as the signatures of all the Olympic champions of the Chinese National Gymnastics Team that I could find at that time. In this way, our simulated Olympic Games became a favorite among the children and can The Olympic culture and spirit are truly in my heart.

Beijing News: After having the idea of ​​simulating the Winter Olympics, how did it proceed?

As soon as I talked about my ideas to the children, the whole classroom was boiling.

Since it is a simulation, all activities are carried out on the ground, and I thought of dryland skiing.

What about skis, curling, and hockey sticks?

What can I use to find the feeling of skiing?

I saw a chair with universal wheels at home that day, yes, prepare a chair with wheels, and prepare two gymnastics bars for the child.

I just went to the waste station and assembled the first dry snowboard with various good parts from a number of used chairs. I brought it to school and brought the kids to try it out. I started skiing!

Later, I made dry sleds, dry sleds, and tied the foam board and mop with tape, and made safe and fun hockey sticks for the children. The solid tires were fitted with universal wheels to make curling. .

When children saw these simulation equipment for the first time in the playground, they all rushed to play and experience.

The children are holding gymnastics sticks and pushing hard on dryland skis; they are engrossed in throwing dryland curling; the dryland ice hockey game is even more intense. The boys are really fighting, and the girls are also sweating and chasing after me. Hurry, the cue and the cue bang "bang".

Whenever a goal is scored, the children cheer and jump to celebrate the victory, as if this is the Winter Olympics arena.

Finally, when the children participating in the competition put Olympic medals on their chests and wear olive branches on their heads, they all felt the same as Olympic champions.

When the national anthem sounded and the five-star red flag was raised, all children became extremely sacred, and their eyes were full of hope.

Seeing this scene, I know that the seeds of patriotism have been quietly planted in the hearts of children.

Send the children in the mountains to the simulated Olympics

Beijing News: Have you also sent Olympic education to children in Dashan?

Zhou Chenguang: I remember that when the simulated Olympics were being held, I wanted to make a torch platform. After working with the carpenter for a long time, he reluctantly promised 200 yuan a day to help me make one.

It took a lot of effort, and it took three days to do it.

After finishing the checkout, the carpenter said to me: "Mr. Zhou, I know that you are doing a very meaningful thing for the children. My family is in the mountains of rural Anhui. I went out to work and earn money to support my family. The other one also wants to bring good knowledge and culture to the children in my hometown. I beg you one thing, can we hold such an Olympic Games for the children in our hometown at your convenience in the future? I don't need the money."

Later, I really found the opportunity to go to Anhui and sent a mock Olympics to teachers and students in 11 districts and counties.

When the children there saw these colorful sports equipment for the first time, they immediately surrounded me and the equipment, asking this, asking that, touching this and trying that again. They were so happy as if they were celebrating the festival, with their excited expressions. I can't forget it till now.

After the successful bid for the Beijing Winter Olympics in 2015, we took some equipment, methods, and ideas for simulating the Winter Olympics to Shigatse City, Tibet, and gave a large number of primary and middle school physical education teachers a full-staff training. This feature of the innovative simulation of the opening ceremony of the Olympic Games has also been brought to the teachers in Tibet.

This is where we have gone farthest.

In addition, we often carry out promotional activities related to the Olympic Games in many schools around Beijing, such as Yaojiaying Central Primary School in Yanqing District, Yanqing No.1 Kindergarten, and Yanqing Zhangshanying School.

Beijing News: The simulated Olympic Games will continue to be held in the future?

Zhou Chenguang: Since the successful bid to host the Beijing Summer Olympics, our school has hosted 18 simulated Olympics, which are actually the popular mini-version of the Olympics, and will continue to be held in the future, allowing children to experience it on campus. A handful of the world's most grand sporting event.

Now, in addition to being a physical education teacher, I am also a disseminator of Olympic education.

We must know that the four-year competition will not be held in China every year, but this Olympic spirit needs to be passed on in China.

Beijing News: What are you doing recently to welcome the arrival of the Winter Olympics?

Zhou Chenguang: Before, in our spare time, our family assisted Yanqing Yaojiaying Central Primary School and Yanqing No. 1 Kindergarten to hold their own mock Winter Olympics.

In the past few days, I have just returned from Gengdan College of Beijing University of Technology, where I trained 150 teachers from all over the country and introduced them to them one by one about the equipment and competition settings of the simulated Winter Olympics.

Many teachers who came to the training told me that through this training, you will feel that sports can be so cute, and some teachers teach Chinese, mathematics, chemistry and other subjects. They say innovative methods for simulating the Winter Olympics. And thinking can be brought into the subjects they teach, which can help them make their education easier and more effective.

From this point of view, we are more responsible to spread the values ​​of Olympic education.

Now, as a member of the Winter Olympics propaganda team, in my spare time, in addition to going to various places to preach, I will also record some simulated Winter Olympics-related content for various districts and counties, such as how to develop dry-land curling and dry-land ice hockey. , How to creatively implement the Winter Olympics education, cooperate with everyone, carry out the Olympic education in full swing, and spread the Olympic spirit.