Klishina's injury and the shortages of Akimenko and Ivanyuk: Russian athletes started their performance at the Tokyo Games unsuccessfully

Three Russian athletes have completed their performances at the Tokyo Olympics. Daria Klishina was unable to make her way to the long jump final, having allowed two spades in qualifying. On the third attempt, she was unable to get out due to injury and left the arena in a wheelchair. High jumpers Mikhail Akimenko and Ilya Ivanyuk were left without medals in their discipline and took sixth and ninth places, respectively. 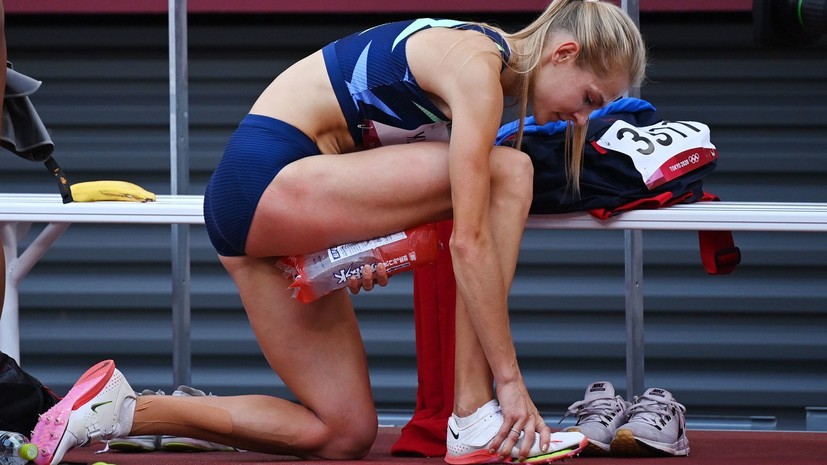 For the third day at the Olympic Games in Tokyo, competitions are held in one of the most prestigious sports - athletics.

The Russian national team also competes at them, but there are only ten people who were allowed to declare by the international federation.

This is better than it was at previous competitions in Rio de Janeiro, when only long jumper Daria Klishina was able to start, but not yet the full-fledged team that was last seen at the Games in London nine years ago ...

Klishina got the opportunity to speak this time too.

Jumping seven meters helped her to join the team, which she did back in March.

With them, the 30-year-old athlete ranks fifth in the world top list.

If in the final of the Olympics it was possible to make at least an equally distant attempt, then it would definitely be an application for a medal.

However, Klishina's plans were not destined to come true.

On Sunday morning, she took part in qualifying, where traditionally three attempts are given to qualify for the final.

The first two were not counted - the Russian woman made spades, although she jumped far beyond 6.60 m. That was how much it was necessary to overcome to pass the selection.

The problem is that during the second jump, Klishina pulled her leg, and actually deprived herself of the opportunity to perform at full strength.

She tried to forget about the injury and accelerated during the third jump, but immediately slowed down, realizing how much it hurt.

Time for the execution of the attempt went on, but Daria no longer looked towards the scoreboard.

She left the sector and asked for the help of doctors.

The volunteers put the athlete in a wheelchair and took her to the medical center at the arena, where she was bandaged.

Interestingly, even the absence of at least one validated attempt did not save Klishina from the need to undergo a doping test.

She had to be tested right in the medical center, although she could no longer walk without crutches.

Only after that, the girl was allowed to return to the Olympic village.

Doctors suspect that Klishina suffered a tear in the back of the thigh muscle - with this injury, one could forget about the finale anyway.

According to sports agent Andrei Mitkov, Klishina did not have a medical clearance from the Federal Medical and Biological Agency, which is usually issued by all athletes before important competitions.

In his Telegram channel, he noted that Klishina provided only American certificates about her health.

According to him, she was included in the number of participants from Russia in violation of the selection principles.

Failures of Akimenko and Ivanyuk

Following Klishina, two more Russian athletes dropped out of the fight for medals. High jumpers Mikhail Akimenko and Ilya Ivanyuk went to Tokyo as favorites of their discipline. Together they won medals at the 2019 World Championships, conceding only Qatar's Mutaz Essu Barshim to first place. Both also showed good results this season - Ivanyuk shared the lead with a jump of 2.37 m with the Belarusian Maxim Nedosekov, and Akimenko was in fourth place with a 2.33 m attempt.

On the first day of the track and field competition, they passed the qualification and on Sunday they became two of the damn dozen participants in the final. The alarm bell for both rang at an altitude of 2.30 m, which both overcame only on the second attempt. This immediately threw them out of the top six. For Ivanyuk, this result remained final. He did not overcome the next level of 2.33 m.

Akimenko still took it, but again not the first time. At the same time, the opponents showed phenomenal results. Together with Barshim, the Italian Gianmarco Tamberi, the Australian Brandon Stark and the Korean U Sang Hyuk immediately overcame the height of 2.35. For all three, this was a tremendous achievement. Akimenko also tried to join them, but now he could not repeat what he did at the World Championships in Doha. He transferred the remaining attempt to a height of 2.37 m and again remained without improvement. At the same time, Nedosekov managed to pull off the same trick - he literally jumped from fifth place to third. Akimenko finished the competition sixth.

The height of 2.37 m was also overcome on the first attempt by Tamberi and Barshim.

Except for them and Nedosekov, no one else conquered the bar.

The Italian and the Qatari shared the gold medals for the first time in the history of Olympic high jumping.

Barshim collected a complete collection of medals and brought the country the first gold in athletics.

Nedosekov became the first Belarusian athlete to win a medal in his discipline.

The Russian national team still has seven chances to take the awards away from Tokyo.

Hammer thrower Valery Pronkin, whose final will take place on 4 August, will be the next to try.

The next day, three athletes will compete for medals at once - hurdler Sergei Shubenkov, walker Vasily Mizinov and Shestovitch Angelica Sidorova.