How did the "Chinese Flying Man" become "trained"?

(Tokyo Olympics) How did the "Chinese trapeze" become "trained"?   China News Agency, Tokyo, July 31st, title: How did the "Chinese flying man" "trained"?   China News Agency reporter Xing Chong   Although she missed the final in 11.22 seconds on the 31st, Geman Chess has already made a history: she is the first Chinese player in the history of the Olympic Games to reach the women's 100m semi-f 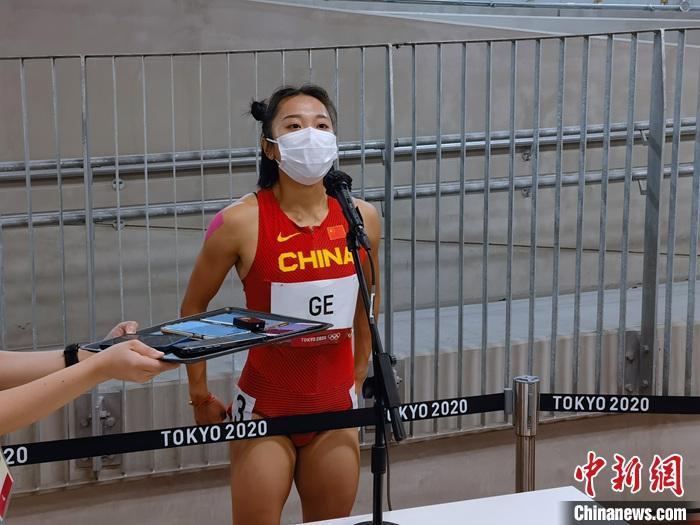 (Tokyo Olympics) How did the "Chinese trapeze" become "trained"?

Although she missed the final in 11.22 seconds on the 31st, Geman Chess has already made a history: she is the first Chinese player in the history of the Olympic Games to reach the women's 100m semi-finals.

At the Rio Olympics five years ago, Ge Manqi, who was under 20 years old at the time, participated in the relay competition and helped the Chinese team get the ninth preliminaries in 42.70, only one step away from the final.

During the Tokyo Olympic cycle, her performance improved by leaps and bounds, and she gradually became the core figure of the Chinese women's sprinter.

Ge Manqi had two "small balls" on his head that day, and the reporter laughed and said that she was a "little Nezha" who was "noisy" on the runway.

How did the "Nezha" on the runway develop his skills?

"In fact, in the past two years, I have been slowly improving and looking for deficiencies, especially in adding a layer of technical strength, and more conscious in training." Ge Manqi said that for the first time she participated in the Olympics, she was not the same as five years ago. Young child, "Our women's team has grown a lot over the years, and I hope that this year we can realize our wish in the relay."

For Wang Chunyu, she also made a history on the 31st-being the first Chinese athlete in history to enter the women's 800-meter final of the Olympic Games.

"I'm so excited, I achieved my goal, and it proves that Randy is right!" When he came to the mixed mining area, Wang Chunyu excitedly said to the reporter.

With such a rapid improvement in performance, Wang Chunyu said it proved that Randy’s training philosophy was correct for more than ten months.

"In fact, many people have misunderstood that 800 meters do not pay much attention to speed training, but Randy has helped me improve my speed a lot." Wang Chunyu said that Randy's confidence in her before the game was "super-full", "He thinks my speed can be Overtake anyone in the sprint."

Compared to preparing for the previous Olympic cycle, Wang Chunyu deliberately strengthened his aerobic capacity and mixed aerobic capacity while ensuring speed, and his training volume has increased.

But she also said that there is no trick to practicing 800 meters, it just depends on the effort.

"We usually pay too much on the training ground, and the results are the best explanation."

Also trained by Randy is Su Bingtian, a flying man who participated in the Olympics for the third time. At the age of 32, he seems to be in better shape than the previous two.

On the evening of July 31st, the first round of the men's 100-meter race in the Tokyo Olympic Games was held. Chinese athlete Su Bingtian ran a time of 10.05 seconds, ranking second in the group and successfully advancing.

On the 31st, Su Bingtian played in the fourth group of the 100-meter preliminaries. His reaction was only 0.141 seconds. He quickly expanded his lead on the way. In the last few meters, he even looked back at the South African player next to him and slowed down and "released the water" to cross the finish line for the second time.

Such a "turning back and looking at the moon" made many people call out, just like the Jamaican flying man Bolt who was at his peak that year.

The preliminaries score of 10 seconds 05, Su Bingtian said it was within his expectations.

"I didn't adapt to the venue before the game. The main reason is to try the feeling. The mobilization is very good." Talking about "draining", Su Bingtian said with a smile. There is no way to resume the game.

Based on Su Bingtian's recent good state, it is also reasonable to say that he "released the water"-he has ran out of 9.98 twice this season. It can be said that he is the first Chinese sprinter who is over 30 years old but is still in full swing.

Before the Olympics, some foreign media even predicted that Su Bingtian will run 9 seconds 91 in the final.

Starting from the 2017 winter training, Su Bingtian's training work has been replaced by Randi. Coach Randi has completely broken the previous model and method in the training arrangements, method selection, technical improvement and specific requirements of Su Bingtian.

Randy encouraged Su Bingtian more than once and said that you have the strength of about 9 seconds and 80 seconds.

In addition to the continuous improvement of training concepts and methods, training a "flying man" requires tenacity and perseverance.

In 2019, Su Bingtian was once affected by injuries and even bluntly said that he was "a leaky balloon."

Fortunately, he finally walked out of the haze, and after returning, he was a stronger Su Bingtian.

He said that compared with Rio five years ago, the competition experience is definitely more abundant, and the strength has also increased.

"I ran this result today, indicating that there is no problem with my physical indicators. If the next game breaks through 10 seconds, there will be no problem in entering the finals." (End)