First she defeated Sarah Sjöström and took the gold in the 50 meter freestyle - then there was also a victory in the medley team race. Emma McKeon became swimming queen and historically the first woman in swimming to take seven medals in the Olympics. - It's an honor because I worked so hard for it, says McKeon. 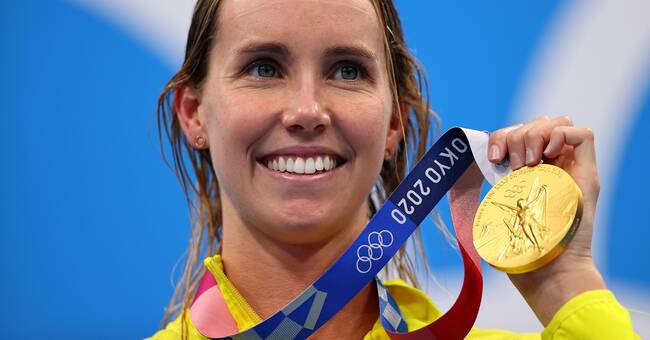 But going for seven medals in Tokyo was not something she focused on before, she says.

- I look at the athletes who have been here before me and am so impressed and inspired by what they have done.

But I have never focused on counting medals, "McKeon, who took four golds, told Reuters.

Previously, Michael Phelps (who won eight golds in Beijing), Mark Spitz and Matt Biondi, all from the United States, have won seven medals during one and the same Olympics.

Emma McKeon is now a shared record holder with the Russian gymnast Maria Gorochovskaya as the only women to have won seven medals during one and the same Olympics.

She also became historic as the first Australian swimmer to win four golds.

On the men's side, Caeleb Dressel won five golds and became Olympic king in the Tokyo swimming arena.

He finished, just like McKeon, by winning the 50-meter freestyle and the medley team race.

- Fantastic, I would not want to change anything.

This is truly a special moment and I am very proud of myself.

It was fun to compete.

I will pat myself on the back and then continue to compete, says Dressel.

The United States took the most gold in swimming, eleven, and Australia took the historic nine, second most.