Departure of Makroguzova and Kholomina, conflict between Guberniev and Chepik and Aliyev's sit-in: what will be remembered for the 9th day of the Games

The Russian men's national volleyball team defeated Tunisia in three sets and took first place in the group, and the water polo players turned out to be stronger than Japan and will play in the quarterfinals with Australia. Beach volleyball players Nadezhda Makgroguzova and Svetlana Kholomina were defeated in the first round of the playoffs, and the wrestlers were unable to join the fight for gold. The well-known journalist Dmitry Guberniev got into a skirmish with the head coach of the national swimming team Sergey Chepik, and boxer Murad Aliyev representing France staged a sit-down strike in protest against the judge's decision. 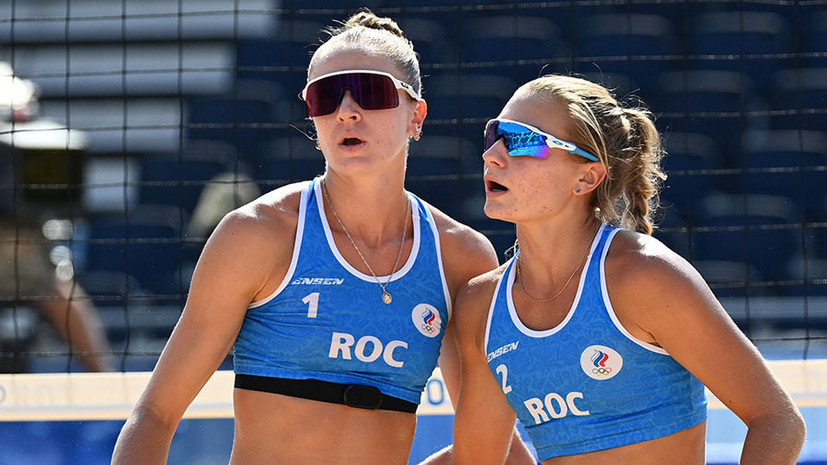 On Sunday, Russian athletes won seven medals and set a personal record at the Tokyo Olympics.

Previously, they were unable to take more than six awards per day.

Unfortunately, there was only one gold among them.

In the final of the mixed tennis, Anastasia Pavlyuchenkova and Andrei Rublev beat Elena Vesnina and Aslan Karatsev.

In turn, Karen Khachanov was content with silver in the men's singles, losing to the German Alexander Zverev.

The second place was also taken by gymnast Anastasia Ilyankova on uneven bars and fencers in the foil team tournament.

Finally, boxers Imam Khatayev and Andrei Zamkova were defeated in the semifinals and guaranteed themselves a bronze.

In addition, on Sunday, wrestling competitions finally started, which should bring Russia a large number of medals.

However, the first day was not very successful.

The Greco-Roman start was taken by Sergei Emelin in the weight category up to 60 kg and Sergei Semyonov (up to 130 kg).

And in freestyle - Natalia Vorobyova (up to 76 kg).

Unfortunately, all three stumbled in the quarterfinals.

Particularly unexpected was the misfire of the latter, which took gold at the Olympic Games in London, and took second place in Rio de Janeiro.

In Tokyo, the 30-year-old athlete first barely passed the Egyptian Amer Samar - 16:12, and then sensationally lost to the young and little-known representative of Kyrgyzstan Ayperi Medet Kyzy - 0:12.

Omar Murtuzaliev, the vice-president of the Russian Wrestling Federation (FSBR), cited the lack of a proper attitude in Vorobyova and her unwillingness to listen to coaches as the reasons for the failure.

Unlike Natalia, Emelin and Semyonov will still get a chance to compete for bronze medals.

However, their failures also came as a big surprise, since both are world champions in 2018, and the latter, in addition, rose to the podium in Rio de Janeiro.

On the other hand, representatives of team sports made the fans happy on Sunday.

Volleyball players after the defeat from France gathered and, as expected, defeated the outsider Tunisia in three sets - 25:20, 25:22, 25:16.

In addition to the very fact of victory over the modest African team, the positive added access to the site of the experienced diagonal Yegor Kluka.

In a previous meeting, he received damage, but apparently it was not serious.

The most productive volleyball player in the national team was the outplayer Maxim Mikhailov, who scored 15 points.

The fourth Victoria helped Russia to finish in the first line in group B. In the quarterfinals, the Olympic champions of London will face off against the Canadians.

“We won first place in the group, which is great.

Cool result, which, however, does not mean anything in the playoffs.

Therefore, it is necessary to prepare, evaluate the schedule and improve the game: decide how to act in attack and defense, ”the head coach of the national team Tuomas Sammelvuo quotes the ROC Telegram channel.

The water polo players beat the hosts of the tournament in the final match of the group stage thanks to the four goals of Alena Serzhantova - 20:16.

At the same time, the first quarter ended with an equal score - 5: 5.

But in the next two wards of Alexander Gaidukov methodically increased the advantage and only in the final allowed the rivals to slightly reduce the gap.

With five points in the asset, the Russians took third place in the B octet. They scored the same number of points with the Hungarians, but let them go ahead due to a defeat in a personal meeting.

This means that in the semifinals, domestic athletes cannot avoid a meeting with the strongest team on the planet, the United States.

However, first they need to go through Australia.

Unfortunately, the path to the playoffs in beach volleyball for Nadezhda McGroguzova and Svetlana Holomina turned out to be short-lived.

In the group stage, they won three victories and confidently took first place.

However, in the first elimination match, the athletes were defeated.

Moreover, they lost to not the strongest couple - young Latvians Anastasia Kravchenoka and Tina Graudina.

The first batch did not bode well for Russian women.

Apparently, this too relaxed the favorites.

In the decisive match, the opponents who caught courage were unstoppable - 15:13.

Instead of fighting for medals, European bronze medalists go home.

In other sports, three finals were held on Sunday with the participation of the Russians, but in all of them they performed exclusively the role of extras.

Maria Polyakova got the opportunity to compete for awards in diving from a three-meter springboard, but took only tenth place, gaining 284.05 points.

However, they did not expect much success from her initially.

The first is on the last ninth line, and the second - on the honorable sixth.

In the shooting, which brought the country to the Olympic Games, a total of seven medals, two of which are gold, passed the first part of qualification in a high-speed pistol (25 meters).

Russian Leonid Yekimov, the current silver medalist of the European Championship in this form, showed a rather modest result at the start and is still in the top ten.

Unfortunately, I remember the next competition day of the Olympic Games and several scandals.

We will remind, earlier the bronze medalist of the London Olympics in rowing Megan Kalmo was unhappy with the silver of Vasilisa Stepanova and Elena Oryabinskaya.

And swimmer Ryan Murphy, after being defeated by Evgeny Rylov at a distance of 200 meters on his back, expressed his fear that “not everything was clean”.

In his opinion, Russian officials, implicated in the doping scandal, "continue to lie" and attack those who are trying to resist them.

“Unfortunately, we have already seen this horror film, in which Russia's actions under the state-sponsored doping program go unpunished and it wins, while the leaders of the IOC and WADA try to deceive the world by claiming that Russia is“ suspended ”, - leads the words of a Yahoo functionary.

Moreover, Tigert was dissatisfied with the lack of toughness of the sanctions against the country.

The IOC President Thomas Bach put an end to these disputes.

He stressed that the domestic athletes who came to Tokyo "have passed all the qualifications and tests", and therefore "have the right to appropriate treatment."

"The Russian Olympic Committee here fully respects the sanctions that were adopted by the World Anti-Doping Agency (WADA)," TASS quoted Bach as saying.

Also on Sunday, according to TASS, there was a skirmish between the famous commentator Dmitry Guberniev and the head coach of the Russian national swimming team Sergei Chepik.

The journalist was dissatisfied with the performance of the team, which won a total of five medals in Japan.

In turn, the specialist did not agree with his harsh assessment and called the commentator's work on the air a "bazaar".

“You do voice acting, but you don’t understand anything about the methodology,” Chepik said.

In response, Guberniev stressed that if he said everything he thinks, they would not "be sitting here."

“I am not a sound engineer and you are responsible for the result.

He later called on coaches to publicly disclose what their mistakes were in preparing for the Olympic Games.

“With the swimming potential that allows us to compete on an equal footing with the United States and Australia, we win quite a bit.

If we are satisfied with this, then we are not a great sports power, but a pocket one ... I support the country, the team.

And when you throw critical arrows at the specialists a couple of times for a reportage, and then you get such a reaction ... It turns out that the thief has a hat on fire, ”Guberniev quotes“ Championship ”.

One of the main events of the next competitive day of the Games was the incident with the participation of Murad Aliyev.

At the end of the second round, his fight with Briton Fraser Clark was stopped, and the referee decided to disqualify the Frenchman.

The reason for this was allegedly a blow to the head, with which he opened bleeding over the opponent's left eye.

True, the doctor recognized the dissection as insignificant and allowed the athlete to continue the fight.

In addition, similar clashes have occurred in the past.

But for inexplicable reasons, it was this particular misconduct that led to the end of the duel.

Aliyev took this decision of the judges extremely aggressively and made a real show in the ring.

The Frenchman spat out the mouthpiece, made an indecent gesture several times, shouted something into the camera.

He still shook hands with his counterpart, but did not admit defeat.

Murad went on strike, sitting silently in the ring for about half an hour.

I didn’t hit my opponent with my head, I don’t know where the referee got it from.

But we realized that it would be impossible to dispute anything.

And I decided to finish it, ”TASS quotes Aliyev.

Later it turned out that the outcome of the fight between Aliyev and Fraser would not be revised.

At the same time, the Frenchman may face long-term disqualification for such behavior.