Defeat of the USA and rescue with France: Russian volleyball and handball players won amazing victories at the Games

Russia defeated the United States in the women's volleyball group stage match at the Tokyo Olympics. The game lasted only three sets, one of which Sergio Buzato's wards won with a crushing score of 25:12. The domestic handball players also achieved success, having prevailed in the remake of the final of the Games in Rio over France. The main heroines of the stubborn ending were Anna Sedoykina, who repelled one-on-one, and Ksenia Makeeva, who made two interceptions. Both national teams secured tickets to the quarterfinals ahead of schedule. 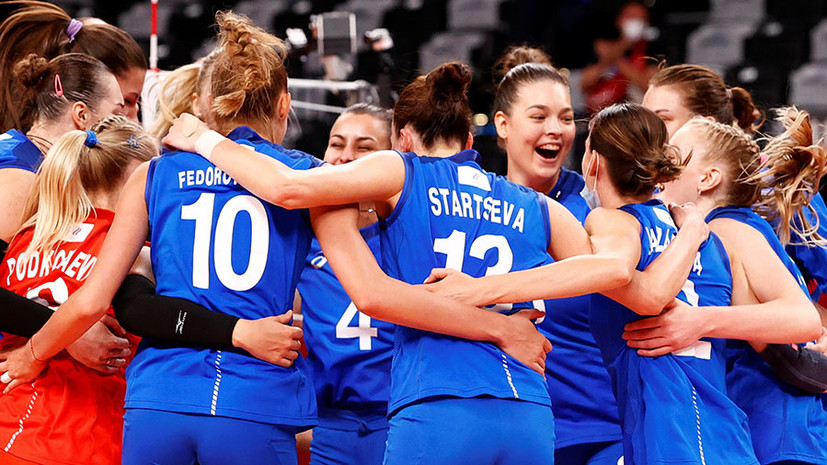 First victory over the United States in six years

Before the Olympic Games in Tokyo, it was just right for the Russian women's volleyball team to play the role of a dark horse, for which the first priority is to fight for an exit from the group, and not for medals. This not the most pleasant feeling intensified after the starting defeat from the Italian national team. After him, the danger of the first playoff skip in history became quite real.

Fortunately, the worst expectations were not met. Sergio Buzato's men cheered themselves up with a victory over Argentina and took over the Chinese national team in a mind-blowing five-set match. But the situation with reaching the playoffs still remained unresolved, since the next meeting with the United States was waiting for the Russians. Its winner was almost determined in advance - this year the American women went through the storm against their rivals in the League of Nations, winning 16 matches out of 17, and continued their unbeaten run in Tokyo, having given only two sets so far.

However, the Russians went to the match with the best team in the world at the moment without a drop of fear and excitement.

Her phenomenal defensive actions not only saved the national team, but also created a springboard for Natalia Goncharova's attacks, which she actively used.

Having earned a good backlog of four goals in the middle of the set, the Russian team brought him to victory with a score of 25:20.

The second game was a real revelation.

With the score 6: 5 in their favor, Busato's wards won seven draws in a row.

The American women stopped doing anything at all in the attack, and they surrendered the set with a crushing score of 12:25.

On their part, it could have been a cunning trick to quickly switch to the next game and start saving the match in it.

But if such a plan existed, then it did not bring any result. The Russian national team continued to control the game and keep their distance from their rivals. With a score of 15:18, the American women still set off in pursuit and restored parity, but Fedorovtseva stopped this impulse. Her attacks and powerful serve allowed her to end the set in her favor. 25:19 - such a result, taking into account everything that happened in the match before, can be called a defeat.

“We were told after the game that we had not defeated the US team for six years. It turns out that we and China last won in 2018 when Zhu Ting was not there. I'm very happy! 3: 0 against the USA, 25:12 in the set - when did America lose to anyone like that? The American women played like horses even now. This is the team that was famous for its technique, tactics, cleanliness. They still had a minimum of mistakes today. At this tournament, the American women practically did not allow a single ace to enter their site, and then I submitted an ace to them. I am very glad, ”the blocker Irina Koroleva shared her emotions after the match.

The victory over the United States not only helped Russia to break into the playoffs, but also knock out the reigning Olympic champions from China even before the start of their fourth round match.

And Buzato's wards, thanks to the created sensation, will now be able to compete for the first place in the group in the final meeting with Turkey, which will allow them to get a simpler opponent in the quarterfinals and a comfortable grid in the playoffs.

The nervous ending in the 2016 Games final remake

The Russian national handball team found itself in an even more difficult situation.

The current Olympic champions did not even make it into the playoff zone after three rounds.

They shared the third place with Brazil and France, but were inferior to both in additional indicators.

In such a situation, it was no longer possible to lose points.

In the next match, Alexei Alekseev's wards just met with French women in the repetition of the final of the last Olympics.

At first, the game corresponded to the position of the teams in the standings - no one managed to break away, and if it turned out to be a story with a difference of three goals, as Daria Dmitrieva did in the middle of the first half, then the parity was quickly restored.

This continued until the 24th minute, when the loss of the same Dmitrieva suddenly inspired the rivals in an incredible way.

After several quick attacks, they made a spurt, took the lead 16:12 and left no chance to win back before the break.

Fortunately, the Russians showed character and, in the minority, reduced the gap to two goals.

The chase continued in the second half, but it dragged on for a long time. Only seven and a half minutes before the end, the throw of Polina Vedekhina after the loss of the French women allowed the Russians to come out ahead again. But it was not so easy to bring the matter to victory without hassle. The current vice-champions leveled the score and conceded again after a seven-meter kick performed by Vedekhina (in total, she realized seven out of seven handball penalties during the game).

After the interception of Ksenia Makeeva with a score of 28:27, it seemed that the game was saved and the last minute would become a formality, but Polina Kuznetsova managed to get out of the corner so that the most experienced Alison Pino fled into a counterattack and could bring the French women a draw, but Anna saved the national team from a sure goal. Sedoykin.

The attack of the French women continued and could have ended with a throw with a siren, but Makeeva again managed to steal the ball after a pass to the line.

“The result can be different, the main thing is how you play.

Today we were one, fighting for each other.

There was a Team on the site.

In the second half of the first half, they made several unnecessary losses and conceded easy goals.

But we saw that the game was working out, and we must continue in the same spirit, ”Makeeva said after the match.

Russia won the second match at the Olympics and climbed to second place in the group, at the same time ensuring its participation in the playoffs. It remains for him to hold one more meeting with Spain. Winning it will allow you to avoid games with the extremely dangerous Netherlands and Norway, which terrify everyone in their sextet.