They won the gold medal, they are the future, they are still children... 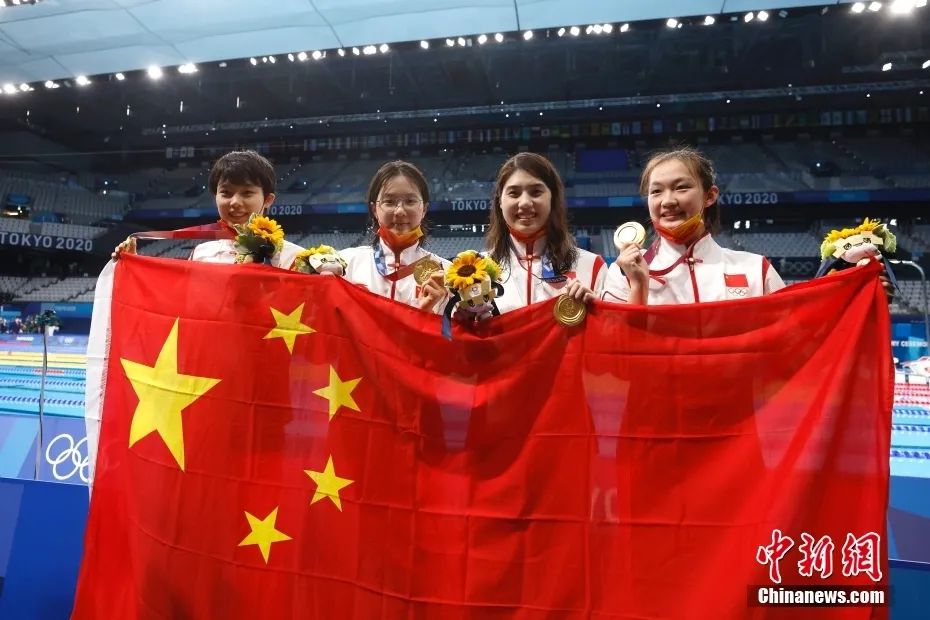 On the morning of the 29th, the Chinese swimming team won two Olympic gold medals: the women's 200m butterfly and the women's 4x200m freestyle relay.

In the women's 4x200m freestyle relay competition, Zhang Yufei was born in 1998 among the four young players, and the other three were all "post-00s."

Netizens who follow this Olympics will find that among the athletes of the Chinese delegation in this Olympics, the young and new generation of athletes performed extraordinary. Many of them won medals for the first time participating in the Olympics.

More importantly, their calmness, self-confidence, optimism, and determination made everyone see and sigh: "Chinese teenager, the future can be expected!"

They calmly challenged, even if "fate is hanging by a thread"

On the morning of July 24, in the women’s 10m air rifle final of the Tokyo Olympics, the Chinese “post-00” teenager Yang Qian calmly responded after being behind his opponent by 0.2 ring. The last shot made a successful counterattack with a 9.8 ring and won the tournament. The first gold of the Olympic Games.

But Yang Qian, who was informed of the results, was calm and did not make any exaggerated reactions except for "comparing hearts" to the audience at the awards ceremony.

Some netizens commented, "My heart is jumping to my throat, how can Yang Qian be so calm?!"

They are optimistic and free, even if they miss the gold medal

After the game, Zhang Yufei was lost for a moment when he saw the big screen, but he quickly returned to his usual liveliness. He gestured "Yeah" to the camera from time to time, and talked and laughed with the reporter who was interviewing.

In the two games today (29th), Zhang Yufei, who won the gold medal, once again showed a sunny smile. This time, she compared her heart to the camera beautifully.

Sun Yingsha is in the game.

Under such high pressure, the "post-00" Sun Yingsha became more and more courageous, "killing" the next game after another without giving his opponent any chance to comeback.

Even the head coach of the National Table Tennis Women's Team, Li Sun, said after the game that the game progressed faster than expected.

They are tough and tenacious, despite their injuries

Hou Zhihui, a Chinese female weightlifter born in 1997, finally achieved her goal of winning the Olympic Games. For this day, she waited 1818 days.

The picture shows Hou Zhihui showing the gold medal at the award ceremony.

The previous missed qualification for the Rio Olympic Games was a huge blow to her. The "little monkey" who has always been sunny has even become a little introverted.

With the help of the coach, Hou Zhihui is treating knee injuries on the one hand and psychological trauma on the other.

She gradually regained her confidence and devoted herself to training again. This time, she trained harder than before, and had more stringent technical requirements.

In the subsequent games, the "little monkey" got better and better. He once won many championships and returned to the top of the world.

They are still childish, and they are also cute children off the court

When asked what gift he wanted, the 17-year-old Zhang Jiaqi smiled shyly and said shyly, "Maybe I still want a Barbie doll."

The picture shows Chen Yuxi and Zhang Jiaqi displaying the Chinese national flag in the venue.

The childish Zhang Jiaqi said that he was milky and milky. In an interview, he said that he would win many championships again. He was called "speaking the most dragging words in the milkiest tone." Netizens said that "the little girl is cute and cute. so cute!"

It is understood that nearly 60% of the athletes in the Chinese delegation are born in 1995, and there are also a group of teenagers born in 00, with a minimum age of 14 years old.

In this Olympic Games, many young teenagers came to the fore and showed the new image of Chinese athletes in the new era. Their demeanor has to be sighed for fearful future generations!

A strong youth is a strong country, a Chinese teenager, and the future can be expected!