Anna Prakaten brought the Russian national team the second medal in rowing at the Olympic Games in Tokyo. She won silver in the singles final, losing only to New Zealander Emma Twigg. This is the first national award in the discipline in 41 years. In the men's competition, Alexander Vyazovkin finished fifth. 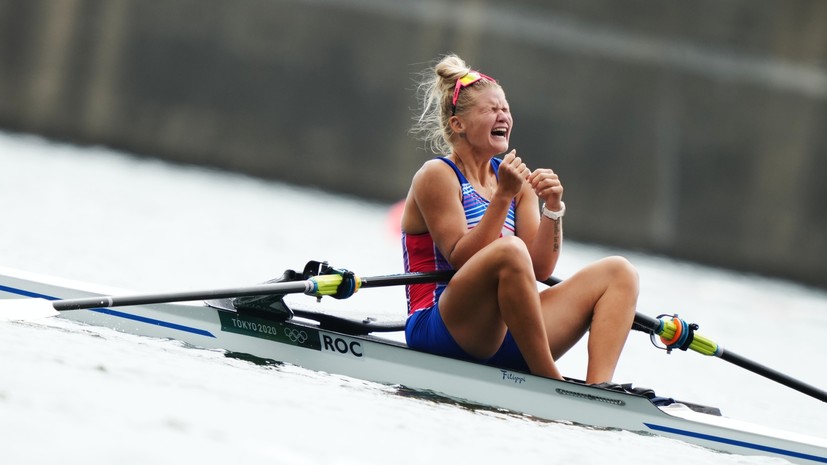 Russian rower Anna Prakaten went to the Tokyo Olympics with one mission - to bring the country the first award in her sport in 17 years.

As the reigning European champion in singles and the winner of the prestigious stage of the World Cup in Lucerne, she had absolutely every chance to interrupt a long, mediocre streak.

But Prakaten 'failed to cope with this task, and for that there was a quite pleasant reason for the fans. A day earlier, Vasilisa Stepanova and Elena Oryabinskaya were ahead of her, sensationally becoming the second in the competition of twos. Their success did not negate the fact that Prakaten was still counting on the podium, only now her hit would help the Russian team achieve a new, larger achievement - for the first time since 1988 to win more than one medal at the Olympics in rowing.

The results of the semi-finals, which took place shortly after the silver race of Stepanova and Oryabinskaya, confirmed Prakaten's intentions.

The former Belarusian athlete made her way to the main race with the second time.

Simultaneously with her, the representative of the male single Alexander Vyazovkin reached the final.

On Friday, they were supposed to return to the rowing channel and try to please the fans again.

The start of the women's final race was not very successful for Prakaten.

She immediately noticeably lagged behind other girls.

The Russian athlete not only lost almost half of the body at the very beginning, but also did not show the same intensity of strokes that her rivals had.

She crossed the 500-meter mark last with a 1.5-second lag from the top three.

However, it was too early to panic.

In rowing, you need to overcome 2000 meters, and the ability to correctly distribute forces is extremely important.

Prakaten had no problems with this.

Gradually, she caught up with the other participants, and by the middle of the distance she was already next to the medal contenders.

A few more strokes, and the Russian athlete was already leading in the dispute for the silver, while those who were behind, the pace dropped rapidly.

Only Emma Twigg, a New Zealander, walked apart from everyone else.

She had no equal in any of the past races, each of which she won with an advantage of a few seconds.

In the finale, she also did not notice what was happening behind her.

And there Prakaten was already confidently going to second place, having almost one and a half seconds advantage over Austrian Magdalena Lobnig 500 meters before the finish.

Prakaten also surpassed him, only she became the second and won the silver medal.

This medal became the first for domestic rowing in women's singles since 1980 - 41 years ago, Ryazan athlete Antonina Makhina was also second.

Bronze in Tokyo was won by Lobnig, who until recently had to fight for her medal with her pursuers.

Vyazovkin's participation in the final right after Prakaten 'was in itself a small sensation.

It was enough to look at his performances in preliminary races, when he did not show results at the level of the first six.

However, from start to start, he continued to struggle and took the necessary places for promotion, and those with whom he competed went to the repechage races.

When Vyazovkin reached the semifinals, he had already achieved the best result for domestic rowers over the past 41 years.

But he did not stop there either, making his way to the medal race, and even with the fourth overall time.

The lag behind the Dane Sverri Sandberg Nielsen, who is the reigning vice-world champion, was quite small and amounted to just over half a second - next time he could be won back.

But still, in the final, Vyazovkin did not have enough experience in fighting with such titled rivals as they were in the main Olympic race.

In addition, he rode on the extreme left water, which deprived him of the necessary contact with other rowers.

Soon after the start, a group of four athletes was formed, which began to work hard on the way to the finish line.

The Russian tried to hold on to her, by the middle of the distance he was losing less than a second, but he could not keep up the pace of the leaders any longer. He remained fifth until the finish line. A medalless series in men's solitary confinement, which has been going on since 1980, is still going on. And the victory in Tokyo was rather unexpectedly won by the Greek Stefanos Duscos, who followed Twigg with the best result in the history of the Olympic Games. Norwegian Hetil Borh finished second, Croat Damir Martin won bronze.