Russian Yevgeny Rylov became a two-time Olympic champion in Tokyo. To the gold in swimming 100 meters on the back, he added another award of the highest dignity at a distance twice as long. In the final, the 24-year-old also set a new Olympic record. Evgenia Chikunova was left without a medal in the 200m breaststroke. She finished fourth, 0.04 seconds behind third place. 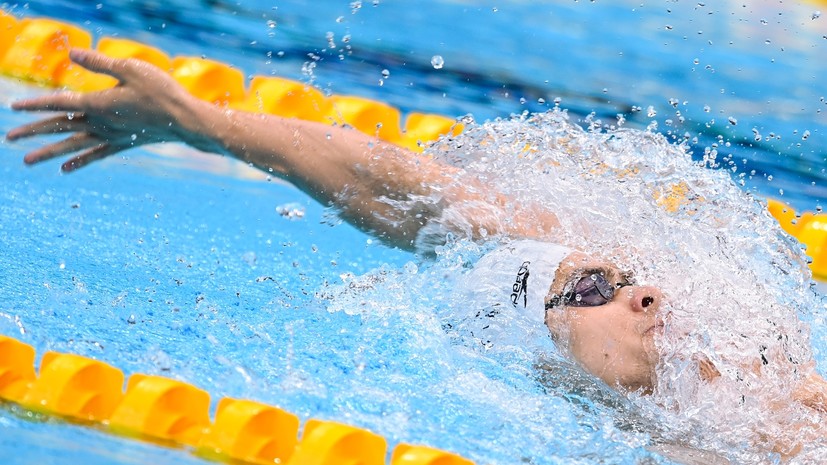 After winning a distance of 200 m on the back after the 100-meter race, Evgeny Rylov made a double, which happened only three times in the history of Russian swimming.

Rylov won his second medal with such composure and equanimity that it even slightly discouraged: where is the fight?

A man goes to the start against the great Ryan Murphy, who tore the entire "clearing" in backstroke at the Games in Rio to shreds, brings him almost a second at the finish line, and does it all so casually, as if in his Vidnoye near Moscow he went for bread.

I bought it, brought it, made myself a sandwich and ate it, as I intended.

What to be happy about?

In about the same time, Popov reacted to victories.

Some of the champions could rage in the mixed zone, burst into tears of happiness, or laugh hysterically, and the Russian sprinter began to calmly dissect the distance just covered, talking about the number of strokes or seconds shown in the second segment.

So Rylov (did he smile at all after the finish?) Said:

“The last fifty dollars did not swim, I got up.

Either overworked it in training, or underworked - you have to watch. "

The swimmer was also slightly dissatisfied with the time shown in the final (1.53.27): it was "just" an Olympic record.

From a sports point of view, having won two gold medals in backstroke, Rylov accomplished a feat.

If victory at a longer distance was predicted in advance and was expected (it is no coincidence that after the Games in Rio Rylov won two hundred meters at two world championships), then the victory in the “hundred”, according to the athlete, was beyond human capabilities.

Even coach Andrei Shishin, commenting to me on the phone the first victory of his ward, briefly remarked about the preparation for the Games of two distances at once: "We are walking along the edge."

This, in fact, has always been the most difficult thing in sailing - to connect the incompatible.

Sprint requires muscle mass, explosive strength, which means a lot of work in the gym.

For those who specialize in longer distances, serious muscular work, on the contrary, creates obstacles, slows down progress in the water.

Finding the right balance is a very delicate work of coaching, jewelry.

At all times, the specialists capable of realizing it at the Olympic Games could be counted on one hand in swimming.

In Tokyo, there are officially one more of them.

In fact, Rylov was extremely tired. In the same place, in the mixed zone, he admitted that in the last 25 meters of the distance his legs were wildly cramped. When this begins to happen in the water, the outcome of the swim, it happens, is decided by one meter of distance. The history of swimming knows cases when athletes lost their victory, losing the ability to endure centimeters before the finish line. Here everything looked simple and understandable: I came, I saw, I won. Exactly according to the behests of the great Roman commander Gaius Julius Caesar, who designated with this phrase one of his rapid military victories.

Now Rylov is given the chance to repeat another Popov's record - in the number of awards won in one Olympics. Although in the combined relay, which will traditionally end the swimming tournament on Sunday, it will be difficult for the Russian guys: the not brightest performance of Anton Chupkov and Kirill Prigoda in the 100-meter breaststroke, where both did not reach the final, suggests that this particular segment could become in the relay weak link, and the strongest Russian sprinter Kliment Kolesnikov starts that day in his personal 50-meter freestyle distance and in order to count on a high result, he will have to recover as much as possible within an hour.

But you don't have to think about it yet. And just rejoice that Russian swimming, albeit thanks to one athlete, has regained its gold Olympic positions. Rylov's victory overshadowed even the most burning of the swimming topics - the women's two-hundred-meter breaststroke without the reigning world champion at this distance, Yulia Efimova. The only Russian finalist Evgenia Chikunova remained fourth on Friday, unable to repeat her semifinal result, which would allow her to climb the podium.