"We must be able to accept defeat": how Russia reacted to the words of the American swimmer Murphy about Rylov

Ryan Murphy questioned the fairness of the swimming competition at the Tokyo Games after Evgeny Rylov won the 200-meter backstroke. He argues that the fight against doping is not being conducted effectively enough. Briton Luke Greenbank agreed with his opinion, hinting at the scandal around RUSADA. In Russia, the statements of the swimmers were sharply condemned, suggesting that they were trying to make excuses for the defeat. The winner of the swim himself noted that he discussed the situation with Murphy, who apologized for the misunderstanding. 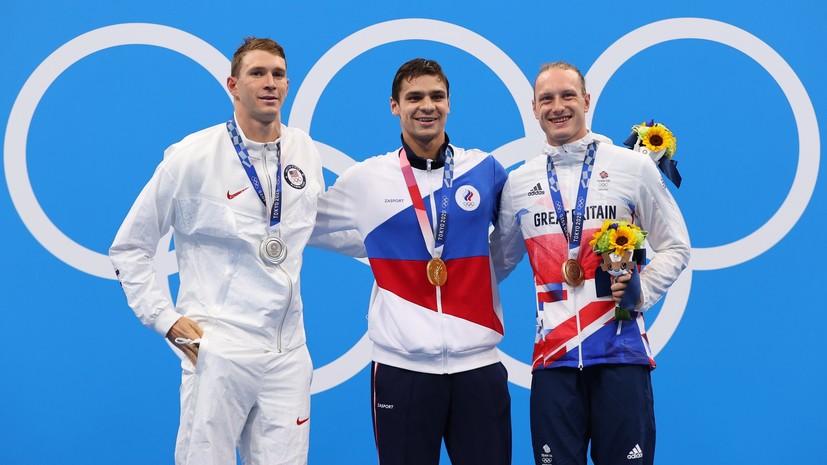 The triumph of Evgeny Rylov at a distance of 200 m on the back was overshadowed by the statements of his main rivals - American Ryan Murphy and Briton Luke Greenbank, who took second and third places, respectively.

Commenting on the result, they expressed doubts about the cleanliness of the swim, referring to past doping scandals - including those around Russian athletes.

“Throughout the year, I have been psychologically pressured by the realization that I may be participating in a not entirely clean swim.

It unsettles me, but I have to compete with those who come with me to the start.

I do not have the opportunity to prepare for the Olympics at a high level and influence people who make the wrong decisions, ”The Washington Post quoted Murphy as saying.

Later, at a press conference, the swimmer tried to explain his statement.

He congratulated the Russian on a successful performance and admitted that he was extremely upset by the failure, assuring that it was not his intention to blame anyone.

“I congratulate Evgeniy, he did an incredible job.

But for me it is a huge psychological load that I am swimming in a swim, which is probably not clean, "- quotes him as" Match TV ".

Murphy missed the Tokyo Olympics for the second time.

In the 100 m backstroke he was left with a bronze medal, losing to Rylov and his compatriot Kliment Kolesnikov.

Greenbank made a similar statement.

He recalled the scandal around the Russian Anti-Doping Agency (RUSADA) and the assumptions that the doping system in Russia exists at the suggestion of the state.

“Obviously, as an athlete, it upsets me that there is a government-backed doping program somewhere.

I feel that perhaps more could have been done to eradicate this, ”explained Greenbank.

Acting General Director Mikhail Bukhanov assured that the organization is confident in the cleanliness of absolutely all Russians participating in the Games, as they passed all the necessary checks in accordance with applicable standards.

“Rylov is being checked by the international federation at the same time.

Our responsibility ends exactly where the training of the athlete ends.

We released him ... Then the sphere of responsibility of the athlete himself begins.

It is clear that in this case there are emotions, ”said Bukhanov RT.

Rylov himself assured that he is a pure athlete and would not forgive himself if he decided to use doping.

Later, he said that the athletes, in a personal conversation, settled all misunderstandings.

“There was a misunderstanding - his answer was misunderstood.

He was asked in general about doping in swimming.

Ryan replied that most likely not everyone is clean.

He has every right to think so, I think, in part it is.

But his words were interpreted incorrectly, referring them to our swim.

He wrote me a personal message, asked for forgiveness for the misunderstanding.

Everything is fine, there are no problems, don’t worry, ”Rylov assured.

His words were confirmed by a journalist who asked the American a question about doping.

According to her, he did not touch on specific athletes, and Murphy himself only complained that an insufficiently effective fight against doping was being conducted in swimming.

“How nervous our victories of individual colleagues in the shop are.

Yes, we are here at the Olympics.

Whether someone likes it or not.

But you have to be able to lose.

But not everyone is given this.

The old hurdy-gurdy again started the song about Russian doping.

Someone diligently twists the pen of English-language propaganda, sweating verbally in the Tokyo heat.

Through the mouths of athletes offended by the defeats, ”says a message posted on the ROC's social networks.

In turn, the ex-boxer, and now the deputy of the State Duma of the Russian Federation Nikolai Valuev urged athletes not to react to provocations and try to abstract from statements in the media and social networks. The famous coach Tatyana Tarasova accused the American and the British of spreading rumors and called on them to be punished for it. And three-time short course world champion Evgeny Korotyshkin suggested that Murphy was trying to justify his failure.

“You have to be able to accept defeat and draw your own conclusions.

The fact that Ryan Murphy did not show the result that he could show is his problems, his omission and his loss.

<…> The easiest way is to accuse the opponent of foul play.

We know how Zhenya works, how his coach works.

As much time as they spend in the water, in the hall - this is a well-deserved victory and is not subject to any criticism, "- quotes Korotyshkin" Championship ".

Olympic champion in diving Elena Vaytsekhovskaya suggested that the American's statements could have unpleasant consequences both for himself and for the sport in general.

“His words addressed to Rylov - about a possibly unfair fight - untie the hands of everyone who does not have particularly warm feelings for the United States.

After all, now it can be said in the same way that, perhaps, the reason for the individual, not too explainable unsuccessful American performances in Tokyo is related to the same thing as in gymnastics with Simone Biles.

These people may have won their previous victories by using powerful drugs with might and main under the guise of therapeutic exceptions.

And predictably fell, as soon as the Japanese stopped this opportunity, not allowing the import of prohibited medicines into the country, "said Vaytsekhovskaya RT.

And the famous commentator Dmitry Guberniev called Murphy's reaction inadequate, and the swimmer himself - "a loser and dishonest person."

“This is very ugly. And who does he suspect there? Chikunov, who is 16 years old? The same Rylov, whose reputation is absolutely sinless? He won his first medal back in 2015 at the World Championships in Kazan. We haven't had any doping scandals, so it's just the screams of people who have lost, who can't take a punch. So ugh on them, ”Guberniev said.

It should be noted that this is not the first controversial situation with the participation of Russians at the Tokyo Olympics.

After winning silver by Russian rowers Vasilisa Stepanova and Elena Oryabinskaya, American rower Megan Kalmo said that it was unpleasant for her when a team “which should not be at the Games at all” climbed to the podium.

Unlike Murphy, she subsequently did not take away her words, adding that teams more worthy to take prizes took part in the competition.

In addition, representatives of the media allowed themselves controversial comments.

Thus, tennis player Daniil Medvedev argued with a Chilean journalist who at a press conference used the word "cheaters" in relation to the Russian national team.

And his colleague Karen Khachanov did not answer the question of the Brazilian journalist, who asked about the performance under the ROC flag.