Angelina Melnikova and Vladislava Urazova took third and fourth places in the individual all-around at the artistic gymnastics competitions at the Summer Olympic Games in Tokyo. In the absence of the four-time Olympic champion Simone Biles, the Russians were unable to join the fight for gold due to the not very high complexity of the programs. As a result, the victory went to the American Sunishe Lee, ahead of the Brazilian Rebeca Andrade by only 0.135 points. 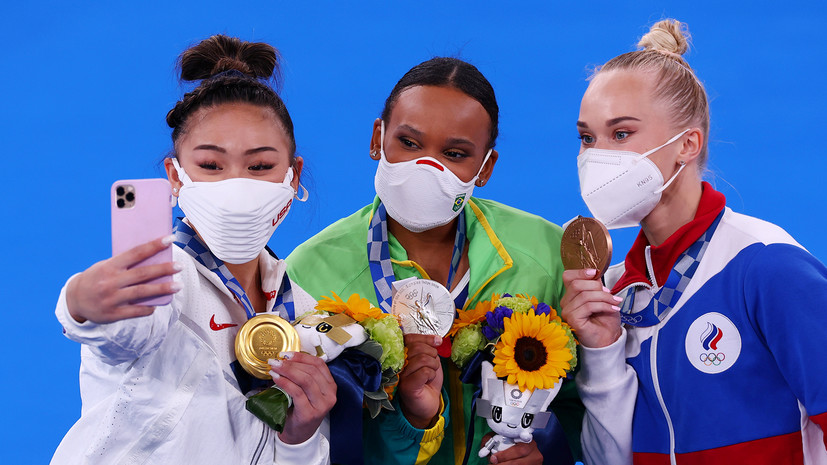 The day before the start of the women's individual all-around final, two-time Olympic champion Svetlana Khorkina said: “I once wanted Russia to win the team championship at the Olympics, and it finally happened.

There is still a dream that one of our gymnasts will get gold in the absolute championship.

Now there is every chance for this. "

The name of the four-time Olympic champion, forced to abandon the two main gymnastic disciplines - team and personal all-around - sounded on television in almost all countries where they have an idea of ​​what artistic gymnastics is.

After all, the absence of an American woman in the form where she won the world championships five times and won a gold medal at the Games in Rio meant that the road to gold could be open for a good half dozen athletes.

Including for two American women, who, before the start of the Games, could not even hope that the great and terrible Simone would give them such a royal gift.

Speaking about Biles, Khorkina noted that she fully understands the reason why the American was forced to refuse to perform.

“It seems to me that it was not a psychological but, above all, a technical failure that went into her.

I have watched the team all-around many times - the moment when Simona performs the vault.

There was clearly a loss in space, and this is a damn dangerous thing.

In this regard, our sport is not the easiest one: the more you “screw up” the elements, the more you fold your head.

So Biles did the right thing to refuse to continue performing, ”Svetlana said.

The days that have passed since the removal of Biles have somewhat clarified the picture of what happened.

A well-known sports physician Nikolai Durmanov suggested that Biles's condition could be a side effect of a drug called methylphenidate, which the athlete has been taking since childhood and has a therapeutic exception for it.

More precisely, rejection of it, the so-called "withdrawal syndrome".

This version looked the closest to the truth: according to information I received privately from Japan, the import of methylphenidate into the country can only be carried out with a special permit, since this drug is banned in Japan.

To obtain a permit for customs, you need to obtain an opinion from an authorized medical institution.

Before the pandemic, the period for considering such issues in Japan was 7-10 days, and since July last year it has increased to six months.

The Americans, however, hoped that the authorization papers from WADA would be enough for them.

And they lost a unique athlete who could easily have taken not even four gold medals in Tokyo, as it was in Rio, but all six gold medals.

When the sole leader suddenly drops out of the competition, this, on the one hand, clears the way to the podium for everyone else, and on the other, the very thought of the availability of victory often causes additional and very strong stress for those who are fighting for a medal.

Confirmation of this happened on the very first shell: the champion of the Asian Games, Chinese Liu Yufei, fell off the bars in a completely uncharacteristic way for herself.

At the end of the qualification, everything was clear with the main contenders: Rebeca Andrade had the second result after Biles: a chiseled Brazilian with programs of mind-boggling complexity and absolutely classical training.

The latter did not have to be surprised: the sports education of Andrade and the entire Brazilian gymnastics for several years was occupied by two amazing, perhaps the best specialists in the world - the recently deceased Ukrainian Oleg Ostapenko, who at one time fostered the absolute champion of Atlanta Lilia Podkopaeva, and the ex-mentor two-time Olympic champion Aliya Mustafina, and before that - the victorious teams of the USSR and Russia, Alexander Alexandrov.

Next on the list of finalists was Sunisha Lee, followed by Angelina Melnikova and Vladislav Urazova.

At the same time, the separation of the athletes from each other was such that it became clear: the one whose nerves were stronger would win in the final.

Purely mathematically, Andrade was supposed to be the winner on this day.

She was more than a point ahead of both Russian girls in basic difficulty.

The same difficulty was listed in Lee's protocol, but it would be completely indecent to put these two gymnasts on the same board in terms of clean lines, ease and quality of work on apparatus.

The Brazilian was let down by emotions.

She was absolutely amazing, in one breath and with a fantastic amplitude of acrobatic elements, a little more than was required in order to control the situation, she performed floor exercises, but twice and very noticeably stepped over the line of the carpet, losing 0.4 points on this.

At the same time, the fate of gold in favor of the American woman was decided by a very tiny value - 0.135.

If the overall complexity of Melnikova and Urazova's programs were a little more comparable to what Lee and Andrade showed, we could probably see a completely different alignment on the podium. In this regard, Angelina did much more for her bronze medal than Lee did for the gold one. So it's definitely not worth grieving about this. You just need to wait, and Khorkina's dream will certainly come true.