Swedish minister furious over bikini compulsion: "I get provoked"

The Norwegian women's national beach handball team was pressured, according to the regulations, to play in minimal bikini bottoms - but refused and was fined. Now the Minister of Culture and Democracy Amanda Lind (MP) is furious about the rule. - I get tired and disappointed that in 2021 we have this type of discussions, she says to SVT Sport. 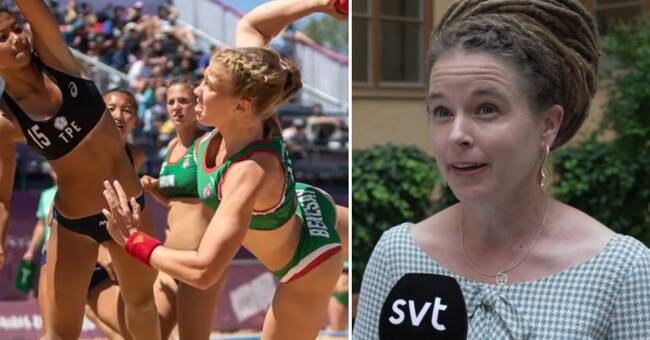 The Norwegian beach handball ladies were pressured to play in bikini bottoms.

They then chose to go against the rules and play a European Championship match in shorts.

Then they were fined.

“Women should wear a bikini where the top should be a tight-fitting sports bra with deep necklines at the arms.

The panties must not be more than ten centimeters on the sides ", reads the regulations for women's beach handball.

- I have great understanding that they chose to do it.

There has been broad support and broad support for Norway and the Norwegian beach handball ladies' action, which is nice to see, she tells SVT Sport.

- This is an outdated rule.

The fact that you make a difference between how women and men should dress, without it having any significance for sports, is absurd.

I get provoked and I know that very many with me have become so.

"Does not belong in modern sports"

Lind believes that the rule does not belong in modern sports, and she has now been invited to a meeting with her Nordic sports minister colleagues to discuss the subject.

- The rules themselves are decided by the sports federations, but we can raise the issue and in different ways see what we can do to support.

Lind is positive about that.

The differences are provocative

According to Lind, the dress codes and rules of different sports are often based on history.

- But what I think provokes many is that there is such a difference in the demands placed on men and women, who have nothing to do with the opportunity to practice sports.

She emphasizes that the rules, which in this case have been set up by the European Beach Handball Federation, are a sexist remnant that does not belong in modern sports.

- I get tired and disappointed that in 2021 we have this type of discussions and that there are this type of differences between men's and women's sports, girls 'and boys' sports.