, In the women's 10m air rifle finals of the Tokyo Olympics held on July 24, Chinese athlete Yang Qian won the championship and won the first gold medal for the Chinese delegation. The picture shows Yang Qian showing love gestures on the podium.   Chinanews.com client, Beijing, July 30th (Xingchen Liu) The Tokyo Olympics has entered the 7th day of the game. As the schedule further deepens, more 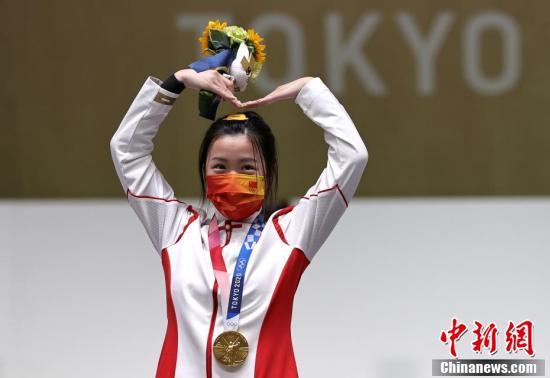 In the women's 10m air rifle finals of the Tokyo Olympics held on July 24, Chinese athlete Yang Qian won the championship and won the first gold medal for the Chinese delegation.

Chinanews.com client, Beijing, July 30th (Xingchen Liu) The Tokyo Olympics has entered the 7th day of the game. As the schedule further deepens, more players have boarded the podium, which symbolizes the supreme honor, but some regrets The losing player also opened his heart to the camera.

Today, I will lead everyone to take a look at the golden sentences of the Tokyo Olympics.

Yang Qian: I want to eat the braised prawns made by mother

The young shooter Yang Qian, born in 2000, is undoubtedly one of the most dazzling stars in the Chinese delegation. On the first match day, she shot the first gold for the Chinese team in the Tokyo Olympics; on July 27, her partner Yang Haoran once again Win gold.

In everyone's eyes, Yang Qian is an excellent player with both strength and appearance. This Tsinghua student has his own unique insights into shooting events.

"Shooting has become a part of my life. It is shooting that has made me. I am also responsible for it with my love." "This year is the 100th anniversary of the founding of the party. I think this gold medal is the best one I have given to my motherland." A gift", "As long as it is made by my mother, I like to eat it. Do I want to eat one dish? I want to eat braised prawns"... Yang Qian's cuteness and love of shooting are reflected in the lines.

On July 29, local time, in the final of the 4x200m freestyle relay of the Tokyo Olympic Games, the Chinese team consisting of Zhang Yufei, Yang Junxuan, Li Bingjie and Tang Muhan won the championship with a time of 7 minutes 40.33 seconds.

On the morning of July 29, in the Tokyo Olympics swimming women’s 4x200m freestyle relay final, the four Chinese girls Yang Junxuan, Tang Muhan, Zhang Yufei, and Li Bingjie won the women’s 4X200m freestyle relay championship with a world record of 7:40.33. This is also the first Olympic gold medal in the relay event in the history of the Chinese swimming team.

"It was mainly because Sister Fei (Zhang Yufei) won the gold medal in the first 200 butterflies at the beginning. Brother Shun (Wang Shun) also played very well. It made us feel very powerful and proved that we Chinese can also do it." Thinking of being able to win the championship, I was about the same distance as Australia when I took over and entered the water. The first 150 meters felt like "cough, this is not my main item", but in the last 50 meters, the power of China started from the bottom of my heart and refused to admit defeat. Fight," it is such a powerful force that makes the Chinese team stand out.

And "I knew I would participate in the 4×200m relay when I warmed up in the morning" and "What fuel for a 200 butterfly!" showed the team's relaxed mentality.

On the afternoon of the 25th, Beijing time, in the men's 61 kg weightlifting competition at the Tokyo Olympics, Chinese athlete Li Fabin won the championship with a snatch of 141 kg, a clean and jerk of 172 kg, and a total score of 313 kg.

The picture shows Li Fabin lifting 166 kilograms in the clean and jerk competition.

Li Fabin: If you need to exercise, you can come to me

An interesting scene appeared in the competition. In a trial lift, Li Fabin tilted his body slightly after lifting the barbell, but he immediately adjusted his center of gravity through a "Golden Rooster Independent" action.

In the post-match interviews, everyone was even more impressed with his humorous answer, "This is a mistake I used to do in competitions, don't mislead everyone. My core strength is relatively strong, so I can break it hard, everyone. Don’t follow me.” “I’m nicknamed “Little Steel Cannon”. My body is rarely injured. It’s all slightly strained. It’s good to take a rest. If you need to exercise, you can come to me.”... Among them, It is the embodiment of Li Fabin's excellent physical fitness and strong self-confidence.

On July 28, local time, in the women’s quadruple scull final of the Tokyo Olympics rowing event, the Chinese team consisting of Cui Xiaotong, Lu Yang, Zhang Ling, and Chen Yunxia crossed the finish line in 6 minutes and 05.13 seconds and won the gold. At the same time refresh the world's best results.

In an interview after the game, the four female players mentioned coach Zhang Xiuyun.

The girls said that in the training, Zhang Xiuyun said the most words: "If I don't torture you now, it will be your opponent who will torture you in the future."

The male team member Zhang Liang said: "This proves that we Chinese can do it as long as we want to do it." It is enough between the lines to see that the players have been fully prepared in the daily training, and it is precisely the hardship day after day. Training, as well as the strict requirements of the coach, has achieved today's brilliance.

The picture shows the Chinese team (red) Yang Shuyu in the game.

Yang Shuyu: As long as the motherland needs me, I will definitely play

"As long as the motherland needs me, I will definitely play." After defeating the French team and winning the precious bronze medal, the 19-year-old Chinese three-person basketball player Yang Shuyu said this sonorously powerful sentence.

The Chinese team won a medal for being selected for the Olympic Games for the first time. This is exciting news for everyone who cares about Chinese basketball.

"The players achieve achievement through hard work. This is the most fulfilling thing as a coach." "If my body allows, I will fight 100% on the court"...The players and the coach confided their feelings after the game. After the baptism, China's three-person basketball is growing rapidly.