With character, but without gold: how the Russian national basketball teams 3 × 3 won silver medals at the Tokyo Games

The Russian national basketball teams 3 × 3 won silver medals at the Olympic Games in Tokyo. The women's team easily coped with China and reached the final, but in the decisive match they could not prevail over the USA - 15:18. In turn, the men's team sensationally defeated Serbia in the semifinals, but later lost to Latvia in a tense struggle - 18:21. 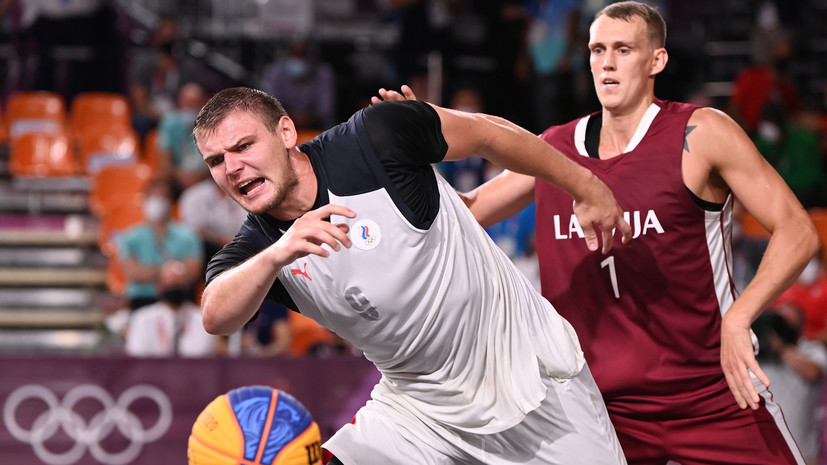 On the eve of the final competitive day of the 3 × 3 Olympic basketball tournament, the highest chances of medals for the Russian women's national team were considered. She overcame the barrier of the group stage of the competition without any problems and immediately qualified for the semifinals, where she was waiting for a meeting with China. Just four days ago, domestic athletes did not leave the Asian women a single chance. Then the match ended with a score of 19: 9, and this is taking into account the fact that the second half of Alexander Diratsuyan's charges were spent in the mode of energy saving.

This time it was a little more difficult for them, the status of the match obliged the opponents to fight to the last. And largely due to the fact that the 195-centimeter Zhitin Zhang looked much more confident, during the course of the tournament she became one of the main weapons of the team from the Middle Kingdom. If in the first meeting she never got out of the game, and the only point was brought to her by precisely executed penalty, then this time she chalked up half of the total number of team points - seven.

However, this only allowed to designate the fight in the semifinals. The Russian national team immediately took the lead in the opening and, although it later allowed to restore parity, at the right moment turned on a higher gear and confidently took the upper hand. Yulia Kozik and Olga Frolkina scored 19 points for two and demonstrated incredible efficiency both under the basket and at a distance. Both performed four shots from beyond the arc, exactly half of which hit the target. Alexandra Logunova added two more points to the total piggy bank, who, although she was unconvincing from the game (0/4), did the free throws regularly.

“We understood that it would be difficult to rehabilitate ourselves if we lose and just win a medal.

Now the medal is already in our pocket, so in the final we just need to be liberated and show our game, enjoy the moment.

If we let go of our thoughts, we relax and just play, then everything will work out, ”RIA Novosti quotes Kozik as saying.

As for the men, in order to reach the final, they had to create a real miracle, because the opponents were the leaders of the rating of national teams - the Serbs, who did not suffer a single defeat in the group stage of the Olympics.

But the wards of Vladimir Aghababyan turned out to be stronger - 21:10.

Of course, the match with the Balkans was especially important for Alexander Zuev.

The leader of the Russian national team failed the previous face-to-face meeting and did not score a single point, having smeared all five shots from the field.

But this time he was unstoppable and ended the meeting with 11 points in his track record, eight of which brought him hits from beyond the arc.

However, the key factor in the victory over the Serbs was excellent defensive play.

The Russians amazingly held back their star rivals and allowed them to execute only nine shots from close range.

At the same time, the Balkans were practically deprived of hopes for "second chance glasses".

Ilya Karpenkov and company reigned in the selection, more than twice surpassing the Serbs in this indicator (17: 7).

“We played the same way and bent our line.

One or two were scored.

Otherwise, it was clear that they were hooked.

In the same way, we tune in to the game, "- quotes the words of Stanislav Sharov" Match TV ".

Despite the fighting spirit of the athletes and bright performances in the semifinals, the Russians' chances in the fight for gold were not assessed high.

First of all, this concerned the women's team, which was to meet with the US team.

In the group stage, the Americans lost only once, and even then more because of underestimation and relaxation than for game reasons.

But it was hardly worth believing that at the decisive stage they would make such a miscalculation.

And so it happened. The US national team has confirmed that for the sake of the Olympic Games, it can assemble a great lineup in 3x3 basketball, which will be extremely difficult to compete with. The American women immediately provided themselves with a comfortable start and subsequently never allowed the Russians to come closer to a distance of less than three points. As a result, the victory of the Stars and Stripes with a score of 18:15 after the allotted ten minutes.

Of course, the very controversial refereeing left its mark on the course of the match. Each minimal contact was accompanied by the referee's whistle, which is why the Russians had seven team remarks in liabilities already after six minutes, and as a result, their total number reached ten. This not only allowed the Americans to execute 11 free throws, but also seriously limited Diratsuyan's wards in defense. It was already very difficult for them to resist the oversized Stephanie Dolson, who literally scattered opponents in the three-second zone, and in these conditions it turned out to be almost impossible.

In addition, one of the main snipers of the Russian national team played extremely unsuccessfully.

Olga Frolkina spent more than seven minutes on the court, during which she smeared six shots from beyond the arc, and hit the target only from under the hoop.

All this could be compensated for with rebounds, but in this aspect, the US team was outright stronger (22:11).

The rest of the girls looked more than worthy, and Logunova scored six points at once.

But this was not enough for success.

“To be honest, we let the nerves and judges a little bit.

We did not rebuild on time, we could have reacted differently, we would have kept a somewhat different distance, maybe not so many fouls would have been given to us.

The American women can and should be beaten, but not this time, apparently, ”said Logunova.

The final in the men's category between the national teams of Russia and Latvia turned out to be more dramatic and eventful. Domestic basketball players entered the court extremely charged for the fight, which was confirmed already in the opening. It took them 68 seconds to score five points and provoke the opponent into four team remarks. It would seem that the perfect excuse to continue to get into the "paint" and force the enemy to break the rules, but instead, the bet was made on long-range hits.

And as luck would have it, in this match, the Russians practically did not fly from beyond the arc. Yes, one can recall Kirill Pisklov's masterpiece from one leg, but that was just a vivid episode. Only 3 out of 12 shots from a distance were accurate, and Zuev made the most mistakes. Alexander made only one attempt out of six and scored two points in a key meeting, which, coupled with two losses, can hardly be called a successful performance.

In the absence of the leader, the aforementioned Pisklov and Ilya Karpenkov took the lead. The 204-centimeter giant was Russia's main offensive option and continued to be hers even after his sneaker tore in the middle of the match. There were no replaceable shoes and he had to fix the completely flew off sole with electrical tape. The opponent, who had completely lost one of the leaders, did not go without problems. Edgars Krumins injured his ankle and left the pitch.

But even in his absence, Latvia found something to respond to Russia. Karlis Lasmanis and Nauris Miesis scored 17 points for two, which allowed them to first catch up and then beat the domestic athletes in the score. As a result, the fate of the gold medals was decided in the end, where Agababyan's team lacked both strength and concentration. In the last 47 seconds, they have made two losses and have never been able to throw around the ring. We completed all the gross mistakes in defense. First, Karpenkov allowed an unhindered breakthrough in the three-second, and then too much freedom was given to the opponent's snipers - 18:21.

“In the beginning we went into the lead, but there was neither strength nor emotion. I tried to get some guys, but it didn't work. Plus, one of our team members broke a sneaker. This is additional psychological pressure. We won the World Championship against Latvia, in the European Games we were also stronger, but now luck was on their side. I almost didn’t manage to take the gold, for which I apologize, ”Pisklov said.