The final is not our dream: how Russia was left without awards in the most successful for itself kind of diving program

The Russian duo took the last place in the final of the synchronized jumping from a three-meter springboard at the Summer Games in Tokyo. Nikita Schleikher did not cope with the last attempt, and the judges left him with Yevgeny Kuznetsov unappreciated. What this failure may indicate is in the RT material. 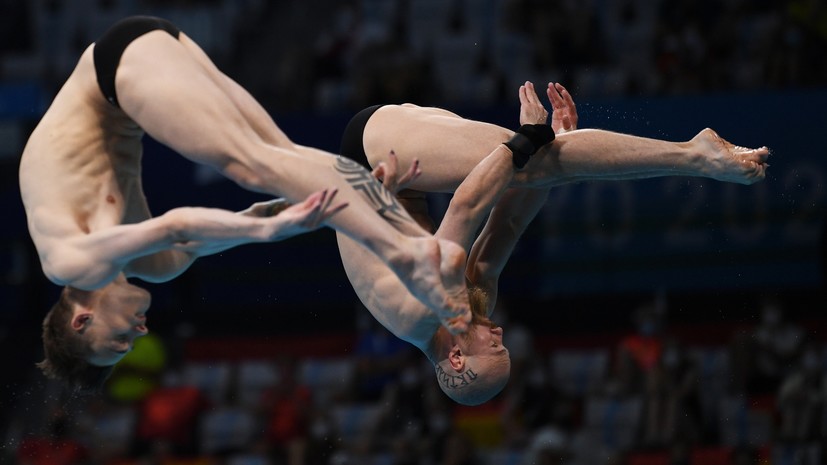 At 15:00 Tokyo time on Wednesday, Evgeny Kuznetsov and Nikita Schleikher had to accomplish the impossible: to return Russian synchronized diving from a three-meter springboard to those positions that were not too long ago considered mandatory for our country. That is, to the Olympic podium. At the five previous Games, Russia won silver medals three times, but where it could really win, by the will of some Jesuit coincidence, it found itself at the very bottom of the final.

The most dramatic and at the same time odious in this regard was the performance of the trampolines in Athens in 2004: everything, as usual, went to the fact that the Chinese would win, but one of the athletes made the final attempt to zero, opening the way to gold for several teams at once ...

And everyone immediately began to pour in.

This happens when a completely real Olympic medal begins to loom in front of a person.

And at the very moment when almost everyone “fell”, and it was clear that the gold would go to Russia with an almost one hundred percent guarantee, two-time Olympic champion Dmitry Sautin, who played at those Games in tandem with Alexander Dobroskok, with whom he became the world champion in "Synchronously" just a year before Athens, I hit my feet on the board.

The winners of that final were the Greeks, who were admitted to the Games as hosts.

Needless to say, neither before nor after has any of the champions won anything else?

In Rio, a much more prosaic situation developed: even before the start of the Games, it was obvious that both the Olympic champion of London Ilya Zakharov and his team-mate Evgeny Kuznetsov were far from being in the best shape.

So much so that after the qualifying championship of the country, the question was raised: is it not worth replacing the three-time vice-champions of the world with Evgeny and Vyacheslav Novosyolov - the twin brothers won the selection that season, but still did not go to Brazil.

The head coach of that Olympic team was so crushed by the feeling of imminent Olympic failure that he invited a shaman to the final gathering.

But this did not help: Zakharov and Kuznetsov remained seventh at the Games.

A year later, on the fourth attempt, they still won the world championship, but in 2019 Ilya was disqualified for a year and a half for missing three doping tests, and Evgeny paired up with Schleicher.

The summary of the previous series on this could be considered over, if not for Zakharov's attempt to enter the same water for the second time: after the Games in Tokyo were forced to be postponed for a year, the athlete, who seems to have already officially announced his retirement, decided to try to return - for the sake of the Olympic synchron.

The idea was supported by the coaches, and this almost openly indicated that the duet of Kuznetsov and Schleicher in their presentation was not good enough to seriously think about Olympic medals.

Nikita and Eugene won silver medals at the May European Championships, losing more than a dozen points to the Germans Patrick Hausding and Lars Rüdiger, but this result did not cause optimism in relation to the Olympics.

Indeed, where is Europe and where is China?

In addition, Schleicher's track record did not include any experience of fighting for medals at such a high and nervous level.

So it turns out that by the day of their main start, the Russian jumpers came up in the status of absolutely dark horses: even they themselves hardly understood what to expect from their joint Olympic debut.

But even in the worst dream, they could not have imagined that the jumpers would actually repeat the most terrible scenario already seen - the Athenian one.

The most likely contenders for the podium on the springboard were, of course, the Chinese: Wang Zongyuan was the 2019 world champion on the one-meter springboard, his partner Xie Sii won gold in individual and synchronized jumps from a three-meter height, and by the Tokyo Games, both were paired ... From the European side, the favorites were opposed by the Olympic champion Rio Jack Lo with a new partner Daniel Goodfellow, at the last world championship the duo won silver, but the very first difficult jump in Tokyo severely broke British plans for world domination: Goodfellow lay on his back at the entrance to the water.

After three rounds (two obligatory jumps and one free), the alignment turned out to be exotic: behind the Chinese were the Americans and the Japanese, who returned for the home Games the elderly veteran Ken Terauchi, who began his Olympic career at the Games in Atlanta and became tenth there on a 10-meter platform ... Kuznetsov and Schleikher were the fifth, lagging behind the leaders by 23.04: so high was the price of unredeemed entry into the water in the first arbitrary attempt.

It is also difficult to provide the representatives of the Celestial Empire with any real resistance in synchronized jumps because in China they refer to the pair types purely technologically: if the node fails, it is immediately changed. That is why the Olympic duo Rio, which lost to the British, was abolished as unnecessary. It is clear that with this approach, each new pair of jumpers turns out to be better than the previous one.

The fourth round strengthened the position of China and slightly raised the shares of the Russians: Evgeny and Nikita had the third total of points, although their lag from the leaders grew to more than 30 points.

In a sense, this greatly blurred the interest in what was happening: when the Olympic winner seems to be obvious and the fight for gold is absent in principle, the competition turns into a kind of get-together, where everyone solves their own problems.

At the same time, the fight for the bronze seemed quite real even after Kuznetsov and Schleicher rolled back to fourth position in the next round.

But in the final jump, Schleicher very unsuccessfully ran into the springboard.

As the jumpers say - missed.

He had not yet had time to completely break away from the board, but it was already clear that there would be no jump.

Single flaws in diving are not a reason to draw far-reaching conclusions, even if the mistake is not technical, but nervous in nature. But in that sad moment of competition for Russia, a whole layer of memories flashed in my head. That it was this expensive jumping combination, four and a half forward turns, that for many years was the crown and absolutely unmistakable for Kuznetsov and Zakharov, that it was precisely such a mistake - with a thwarted swoop on the same element - that Schleicher had already happened, and that nothing had already happened cannot be fixed.