"You should be ashamed": Medvedev demanded to remove the journalist for the provocative question about Russia

Daniil Medvedev came into conflict with a journalist from Chile after the match with Fabio Fognini at the Tokyo Olympics. The reason for this was a provocative question from a reporter who used the word "cheaters" in the context of the Russian national team. The athlete himself refused to comment and demanded that the press representative be removed from work at his matches. In turn, the honored coach of Russia Vladimir Kamelzon sided with Medvedev, and State Duma deputy Dmitry Svishchev called for the Chilean to be deprived of accreditation. 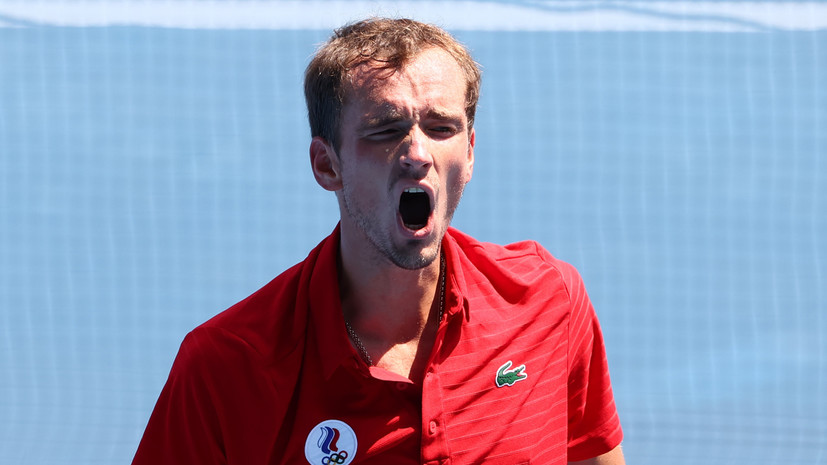 Daniil Medvedev was in the spotlight on the fifth competitive day of the Tokyo Olympics. The domestic athlete reacted sharply to the provocative question of the Chilean journalist and demanded that the leadership of the International Tennis Federation (ITF) no longer allow that to watch their own matches. In Russia, they sided with the second racket of the world and were outraged by the correspondent's behavior.

The incident involving Medvedev occurred immediately after the end of the third round match of the Olympic tennis tournament in singles.

After defeating Fabio Fognini, the Russian went to the mixed zone to communicate with the press, where he met with a journalist from Chile.

He asked Daniel about the national team, at the same time using the word "cheaters" (deceivers) in relation to it.

According to the regulations, the correspondent was wearing a mask, and therefore the tennis player did not immediately hear the question.

But when I grasped the meaning, I could not contain my emotions.

“For the first time in my life, I will not answer a question from an interview.

For the first time in my life!

You should be ashamed of your question.

I don't want to see this person in the mixed zone again, never in my life.

I don’t want to answer his questions.

Probably, you should take care that he was not at the Olympics ", - quotes Medvedev" Sport-Express ".

Subsequently, the second racket of the world separately approached the Russian journalists and told what exactly caused such a negative reaction in him.

“He asked something like:“ Do the Russians bear the stigma of deceivers? ”

For the first time in my life when I didn’t answer the question, ”Medvedev explained.

According to the Chilean himself, he did not expect that his question would cause such emotions in Medvedev.

He suggested that the negative on the part of the Russian could be caused by the fact that he did not fully understand the meaning of his words.

“I asked if there is a stigma on the Russian athletes, I did not give my opinion.

It was strange to me that Medvedev reacted this way.

Yesterday I asked Khachanov about the same thing, and everything was fine.

However, Khachanov himself said that he also did not like to constantly comment on the situation with the temporary suspension of the Russian national team from international competitions and the need to play under a neutral flag.

Karen admitted that he is often asked to speak on this matter, but he evades the answer.

“Foreign journalists ask provocative questions about the flag, but I am not fooled, I calmly answer:“ No comment ”.

We are not guilty of this conflict and we regret that we cannot represent the country, I am even afraid to pronounce the name here now, "TASS quotes Khachanov.

Thus, Dmitry Svishchev, a member of the State Duma Committee on Physical Culture, Sports, Tourism and Youth Affairs, expressed the hope that the International Olympic Committee would help remove the Chilean from work at the Games.

“Quite rightly, Medvedev asked to remove this journalist.

He stood up not only for himself, but for all Russian athletes.

The journalist either asked the question against his will, or completely stupidly gleaned information from strange media.

I really hope that he will be deprived of his accreditation, because not only our athletes, but others as well, may suffer from him.

Such journalists have no place at the Olympic Games, "Svishchev told RT.

The finalist of the Grand Slam tournaments in Australia and the USA was also supported by the Honored Tennis Coach of Russia Vladimir Kamelzon.

According to him, correspondents should choose their words carefully when communicating with athletes of Medvedev's caliber.

“I think this is an incorrect question of a journalist.

The tennis player has just played a difficult match, still on emotions.

Unfortunately, I have not seen the incident itself.

But I am sure that I will be on Medvedev's side.

Daniel proved that he is not an ordinary person, you cannot talk to him as just a good athlete.

Medvedev is on a par with Nadal, Federer and Djokovic.

According to him, Medvedev was clearly not ready for this kind of provocation, because he had not yet had time to recover after a difficult match.

“Of course, they caught the guy.

He has not yet had time to catch his breath, and he is asked a question to which it is not so easy to find an answer.

Our athletes are in a dual position: to put on a jersey, to say that you are from Russia, or not.

Why should Medvedev answer this tricky question?

If I were in his place, I would have answered even harder, ”Kamelson concluded.

Olympic champion in speed skating Svetlana Zhurova praised Medvedev's deed, which did not allow foreign media to speak of Russia in this way.

At the same time, she expressed the opinion that the behavior of the press is expected, and domestic athletes should keep this in mind.

“Medvedev is great for reacting this way. It was right to prepare our athletes for such things, they happen periodically. There are still some provocations, the question of the journalist did not concern his speech, but was actually an insult. This was supposed, the athletes were warned about this ... Medvedev's act with an emphasis on this will dampen the ardor of other journalists, so that they do not ask such questions anymore. We really want to play under the flag of our country, and not under the flag of the NOC. And the fact that it annoys someone that our pure athletes beat everyone is not surprising, it infuriates many, ”Zhurova told TASS.

As for Medvedev, he is unlikely to be able to avoid meeting with a correspondent from Chile in the future.

As the press service of the International Tennis Federation replied, ITF respects the rights of media workers and has no right to deprive them of accreditation or remove them from attending various kinds of events.

“The journalist asked a question that Medvedev did not like.

Journalists have the right to ask anything.

Perhaps you should ask the International Olympic Committee, ”the ITF said.