Tokyo Olympics: the summary of the day of the French of Tuesday, July 27

The French delegation can count on combat sports to fill its collection of Olympic medals. On Tuesday, judoka and flag-bearer Clarisse Agbegnenou won gold for the first time in her career, followed shortly after by the bronze of young taekwondoist Althéa Laurin. France is in 9th place in the standings. 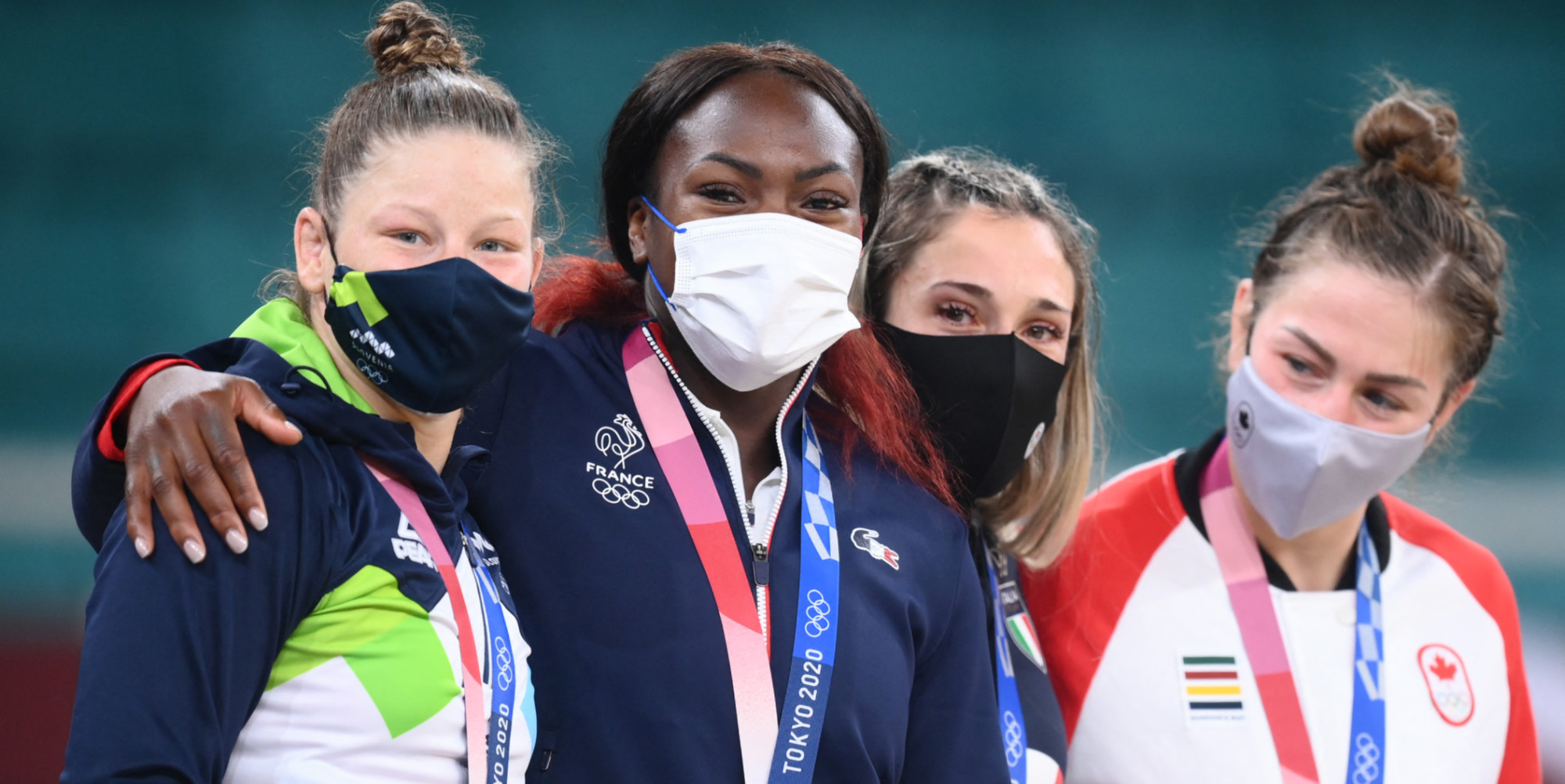 The French delegation can count on combat sports to fill its collection of Olympic medals.

On Tuesday, judoka and flag-bearer Clarisse Agbegnenou won gold for the first time in her career, followed shortly after by the bronze of young taekwondoist Althéa Laurin.

France is in 9th place in the standings.

A sunny July 27 for the flag bearer of the French delegation Clarisse Agbegnenou. The 28-year-old judoka was finally an Olympic gold medalist in the - 63 kilograms category, five years after silver at the Rio 2016 Olympics. The young taekwondoist Althéa Laurin tried to imitate her, but beaten in the half. finals, the 19-year-old Frenchwoman still brilliantly won the bronze medal. As for team sports, a fine performance by the French women's 3x3 basketball team which climbed to the semi-finals of the event, which is the first appearance at the Olympic Games.

Conversely, this day is once again marked by disappointments among the French.

The women's basketball and handball teams also lost in the group stage.

The French Olympic team is ranked 9th in the medal table.

What a sensation from the tricolor judoka!

, one of the flagship of the delegation, won in the final in the - 63 kilos category against the Slovenian Tina Trstenjak, her pet peeve who had beaten her in the final in Rio in 2016, thanks to to a waza-ari in the golden score. The 28-year-old judoka thus won the Olympic gold medal, the only title missing from her impressive track record - five-time world champion and five-time European champion - and which therefore became the most provided in the history of French women's judo. . In tears after the final, Clarisse Agbegnenou can savor her victory after having experienced difficult times, in particular because of the uncertainties about the holding of the Tokyo Olympics.

Thank you France, thank you the world for all these positive waves and your unfailing support!

A great promise for the Paris 2024 Olympics. The young

, 19, won the small taekwondo final of + 67 kilos by sweeping the Ivorian Aminata-Charlène Traoré (17-8), after the end of the fight decided by the arbitrator. Led after the first round (2-6), the young tricolor reversed the situation with the manner by chaining the blows to the trunk and to the head. Althéa Laurin managed to recover from the disappointment of her narrowly lost semi-final against Serbian Milica Mandic (5-7). She thus won the 7th medal of the French delegation, and her future looks bright.

Althéa Laurin climbs on the podium and receives her bronze medal, the first of her young career in Taekwondo # Tokyo2020 # Olympic

The disillusionment of women's mountain biking

It is one of the great chances of medals which flies to France.

, two contenders for the podium or even victory in cross-country mountain biking, failed to take a charm. Ferrand-Prévôt, double world champion in 2019 and 2020, fell twice and let her competitors take the lead, finishing only in 10th place. As for Loana Lecomte, a chain jump slowed her race down and she finished only in 6th position. The two tricolors could not prevent the Swiss from achieving a historic treble on the podium of the event.

️ "I gave everything and I regret nothing"

♀ Arrival 6th in the Cross-Country MTB race for her first participation in the Olympic Games, Loana Lecomte says she is satisfied with her performance # Tokyo2020 # Olympic

Announced as a potential weightlifting medalist,

failed to get onto the podium in the 59 kilo category.

The French athlete from Cameroon lifted a total weight of 213 kg, far behind the new record set at 236 kg by Taiwanese Hsing-Chun Kuo, obviously an Olympic champion.

Cruel disillusion for Dora Meiriama Tchakounté who remains at the foot of the podium for a kilo, despite a superb performance (213kg total).

The Blue beat Japan in the quarter-finals at the end of the suspense (16-14), while they lost in the group stage against this Japanese team (15-19).

Two minutes from the end, Mamignan Touré's partners were caught at 15-14 by the Japanese before taking advantage of a final foul, and the free throw transformed by Marie-Ève ​​Paget to seal the score.

The French team therefore qualifies for the first Olympic semi-finals of this variant of basketball which is making its first appearance at the Olympics.

Les Bleues will face the United States on Wednesday at 10 a.m. (MT) in an attempt to qualify for the final.

On the other hand, an unexpected defeat for the

The Blue were trapped by the Japanese for their entry into the running (70-74).

With this false start, the vice-champions of Europe last June are already in a bad position to leave their group.

They will face Nigeria and then the unbeatable Americans, with the obligation to finish among the two best third.

The next match on Friday (10:20 am French time), against the Nigerians, will therefore look like a knockout match ...

The French selection appeared imprecise and feverish in possession of the ball in the second half.

Its qualification is not compromised but Sweden, the most dominant team in their group, awaits the Blue on Thursday before two last matches against Russia (under neutral flag) then Brazil with the obligation to rank among the first four teams. of their group to see the quarter-finals.

The only breakthrough in French tennis arose from the men's singles table, with the two victories of

A big challenge awaits Humbert on Wednesday against Greece's Stefanos Tsitsipas, while Chardy will play a match within his reach against Briton Liam Broady.

End of the course, however, for the Palois Jérémy Chardy in doubles with

Also note the defeats of Emmanuel Lebesson and Jia-Nan Yuan in the respective tables of men's and women's singles.

Finally, on the badminton side,

won against the Ukrainian Artem Pochtarov in two sets.

New disappointments for the French

Tuesday was also marked by other French disappointments in many disciplines.

We will remember the elimination of

in the quarterfinals of surfing, boxer

in his 100-meter breaststroke series.

did not succeed in making it to the final of the kayak slalom event.