Athletes have warned that the varying preparation periods and camps of local clubs, the multiplicity of training methods, as well as the process of preparing players from one club to another, will make it difficult for the technical staff of the national football team, led by Dutch coach Marvik, to prepare the team, after announcing the launch of the tournament. 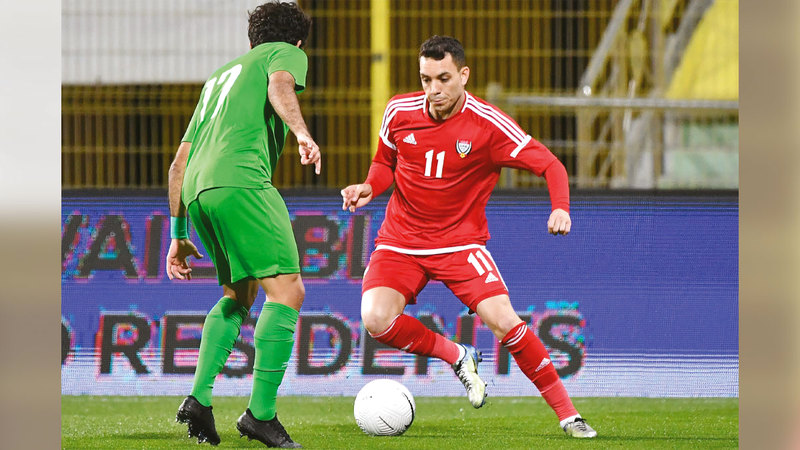 Athletes demand a longer preparation for the World Cup qualifiers. They affirm:

Athletes have warned that the varying preparation periods and camps of local clubs, the multiplicity of training methods, as well as the process of preparing players from one club to another, will make it difficult for the technical staff of the national football team, led by Dutch coach Marvik, to prepare the team, after announcing the launch of the first phase of the tournament. The white camp in Serbia between August 6 and 13, in preparation for the third and final stage of the 2022 World Cup qualifiers.

It is noteworthy that the national team plays in Group A of the World Cup qualifiers with South Korea, Iran, Iraq, Syria and Lebanon.

He will start his career with the Lebanese national team on the second of next September, at Zabeel Stadium in Al-Wasl Club in Dubai.

The athletes told "Emirates Today" that they wished for a longer preparation period, so that Marvik could stand on the status of the players from all sides, whether physical or technical, and see if the player was ready to participate.

The National Teams and Technical Affairs Committee of the Football Association approved the second period of the team's preparation program, starting on August 26, that is, after two rounds of the Arab Gulf League, which starts on August 19.

The former national team coach, Dr. Abdullah Misfer, confirmed that “the preparation of the team depends mainly on the clubs that have already started preparing for the new season,” noting that the variation in preparation periods in the clubs may create a problem for the coach of the team in the preparation process, because the players’ readiness is unequal. Especially since this matter comes with the beginning of a season, and the players stopped playing for a period after the end of the last season, in addition to that each club started a different preparation period from the other club.

He continued, "It would have been better for the national team to play a friendly match during the first preparation period, but the coach knew his program, and perhaps he saw that this period does not require a longer preparation period," noting that he respects his opinion in this regard.

For his part, the former national and international team supervisor, Dr. Hassan Suhail, confirmed that he had hoped that the preparation of the team for the final round of the World Cup qualifiers would start early, go to a longer preparation camp, and hold a friendly tournament to prepare the whites as required.

He continued, "I also wish that the players of the national team would not be left to participate in the camps of their teams," noting that in the team they had previously faced such matters, and had such experiences, and suffered a lot from them, especially in terms of the team players' exposure to injuries, and that Training methods in clubs are different from the national team.

"Certainly, the other teams in the team's group started preparing them from an early age, and their players have been emptied for some time by their federations," Hassan Suhail added.

He stressed the importance of knowing the other teams, pointing out that coach Marvik has a good team to follow up on opponents and their friendly matches.

He explained, "Many said that the team's group is easy, but we must agree that it is difficult, and it needs a fighting spirit from the players, and we must invest opportunities." He continued, "The draw gave the team easy matches at the beginning of its career, and they must be invested." Hassan Suhail indicated that he is optimistic about the team's ascension to the 2022 World Cup, and believes that the squad that the coach depends on is now the best, with distinct elements of the players, and what they have recently presented is the real level of the players. Hassan Suhail considered that top scorer Ali Mabkhout is always there at times when the team needs him, and that he did not disappoint everyone in him.

For his part, the former Olympic team coach and assistant coach of the current Khorfakkan team, Abdul Majeed Al-Nimr, confirmed that “the different preparation periods from one club to another, and then the players joining the team later, may affect the process of preparing the team,” stressing that he would have preferred that The beginning of preparation is with the presence of all the players with the team, and under the personal supervision of coach Marvik, so that the readiness of all the players is at the same level, especially since the period is critical and decisive for the team, but in the current situation in which each club has started its preparations, there is no guarantee about how the situation will be Each player in terms of readiness and preparation.

Abdul Majeed Al-Nimr added: "There are clubs that started their preparations early for the new season, such as Al-Wahda and Sharjah, due to their external entitlements in the AFC Champions League, and therefore the readiness of their players will be better than the rest of the other clubs."

• «Al-Abyad» inaugurates the final stage of the World Cup qualifiers on the second of next September against Lebanon.