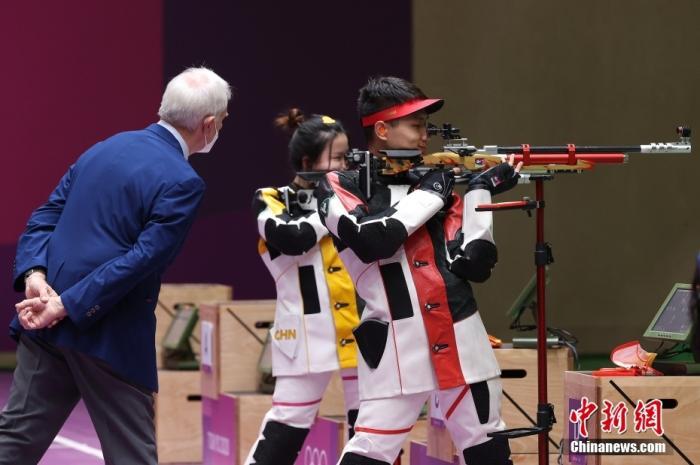 China News Agency, Tokyo, July 27th (Reporter Wang Zumin) After experiencing the regret of no gold the day before, the Chinese Army rebounded strongly on the fourth day of the Tokyo Olympics and won three gold medals again.

"Post-00s" became the protagonist of the Chinese Army's gold medal match that day. Among the three championship projects, there were 4 "post-00s".

As of the 27th, the Japanese team with 10 golds still topped the list temporarily. China and the United States have both 9 gold medals. The US team with the leading number of medals ranks second, and the Chinese team is third.

The picture shows Yang Qian and Yang Haoran in the game.

The Chinese shooting team turned the Olympics into the "National Games" on the 27th and won all two shooting gold medals that day.

So far, the Chinese shooting team has won 3 gold medals in this Olympics, far surpassing the 1 gold medal of the Rio Olympics.

Yang Qian has not only become the first two gold medalists of the Chinese Legion in this Olympics, but also the first Olympic double gold "post-00" in China's sports arena.

15-year-old Chen Yuxi and 17-year-old Zhang Jiaqi led all the way in the competition, and finally won the gold medal with a 50-point lead over their opponents, achieving six consecutive Olympic championships for the Chinese team in this event.

On July 27, local time, the Chinese women's volleyball team, which lost the first match, ushered in the second group stage of the Tokyo Olympics.

Captain Zhu Ting played with an injury and scored a team-high 18 points, but the Chinese team still lost 0:3 to the US women's volleyball team and suffered a two-game losing streak in the Tokyo Olympic group stage.

Following the 0:3 loss to the Turkish team in the first game, the Chinese women's volleyball team suffered another defeat on the 27th, losing to the world's number one American team 0:3. The defending champion lost two straight at the bottom of the group.

Next, the Chinese women's volleyball team will also face the Russian Olympic Committee, Italy and Argentina. Every game is a crucial battle and should not be missed.

In the first two group matches, the Chinese women's football team faced the last opponent in the group stage, the Netherlands, on the evening of the 27th.

Faced with the runner-up of the last World Cup, the Chinese team had nothing to do with it and lost 2:8 to stop the group stage.

The Chinese women's basketball team ushered in the first match of the Olympic Games on the 27th. Facing the group's weakest opponent, Puerto Rico, the Chinese team did not hesitate to achieve a 42-point (97:55) victory.

Another Chinese women's basketball team is even better-in the three-person basketball court, the Chinese women's team entered the knockout round with third place, and then defeated the Italian team 19:13 to advance to the semi-finals.

China's three men's basketball team had 2 wins and 5 losses in the round robin match, leaving early.

Taekwondo women's 67 kg and above and women's epee teams are the focus of the Chinese team's decision to win gold before the game, but on the 27th, the Chinese team lost both in these two items.

The 27th is also the closing day of the Taekwondo event.

In the quarter-finals of the women's class over 67 kg, Rio Olympic champion Zheng Shuyin was upset and defeated the French player 6:14.

Prior to this, Zheng Shuyin's boyfriend, Zhao Shuai, also a Rio Olympic champion, also won only one bronze medal.

So far, the Chinese Taekwondo team has returned without gold in this Olympics.

Since the 2000 Sydney Olympic Games listed Taekwondo as an official event, the Chinese team has won 7 gold medals in the previous 5 Olympic Games. This is the first time that it missed the Olympic gold medal.

The Chinese women's epee team won the London Olympic gold medal and the Rio Olympic silver medal. However, in the semi-finals with the South Korean team on the 27th, Sun Yiwen, who had just won the women's epee individual gold medal, accidentally retired. The Chinese team lost 29:38. .

In the bronze medal battle with the Italian team, the Chinese team, who was absent from Sun Yiwen, lost again and finished fourth.

In the swimming arena, in the men's 100-meter backstroke final, Xu Jiayu, the leader of the Chinese men's swimming team and two-time World Championship gold medalist, had a personal best of 52.51 in the past two years, but only ranked fifth.

After the game, Xu Jiayu, who was troubled by injuries, was astonished at his opponent's "unstoppable" and half-jokingly said that he "felt the ravages of time".

In the women's gymnastics finals, the "Home Alone" Chinese team made frequent mistakes and only finished seventh, tying the team's worst Olympic record. The Russian Olympic Committee team won the gold medal, and the United States and Britain won the silver and bronze medals. (Finish)