Al Matrooshi: I still have the opportunity to achieve the best for UAE swimming

Yesterday, the national team swimmer, Yousef Al-Matrooshi, bid farewell to the 32nd Summer Olympic Games hosted by the Japanese capital, Tokyo, from July 23 to August 8, with the participation of 11,839 athletes, competing in 33 sports, with 339 competitions in 48 origins. 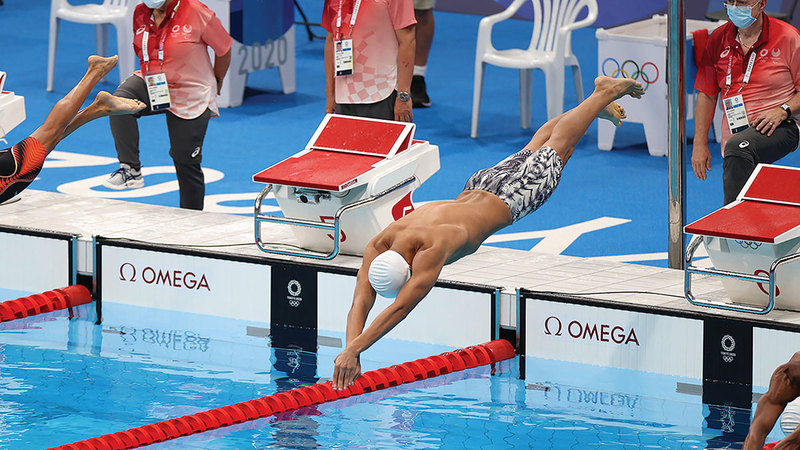 Al Matrooshi: I still have the opportunity to achieve the best for UAE swimming

Yesterday, the national team swimmer, Yousef Al-Matrooshi, bid farewell to the 32nd Summer Olympic Games hosted by the Japanese capital, Tokyo, from July 23 to August 8, with the participation of 11,839 athletes, competing in 33 sports, with 339 competitions in 48 sports facilities. . Al-Matrooshi participated in the third round of the 100-meter freestyle race, and scored a time of 51:50 seconds, in the category that included nine rounds, with a total of 70 swimmers. Al-Matrooshi was eliminated from the qualifying round. He said: I still have the opportunity to achieve the best for UAE swimming.

The UAE is represented in the Tokyo Olympics by five players in four sports, they are: Saif Bin Fattis, the shooter of our national team, who came in 24th place in the skeet competition with 117 points, and Victor Sktov, the judo player, who left from the 32nd round in the under-73 kg weight, and Youssef Al Matrooshi in swimming. The 100-meter freestyle, while our under-100-kg player, Ivan Romanco, will meet his Canadian counterpart Shadi Al-Nahhas in the 32-meter judo competitions, with team runner Mohamed Hassan Al-Nubi ending the UAE's participation in the Olympic forum on the 31st of this month in the 100-meter race.

For his part, Al-Matrooshi stressed, in press statements, that his swimming career is still continuing to achieve more, and strive to win medals and achievements in the name of the nation in the future, especially as he has finally completed his 18th year, which opens the way for him to develop and refine, and smash personal and local records. He indicated that he aspires to participate in the next Paris Olympics in 2024, and the next in Los Angeles in 2028, which he will prepare for from now on, and to benefit from the first Olympic experience. Al-Matrooshi expressed his pride once the country represented the country with the first Olympic participation in his sports career, extending his thanks and appreciation to the National Olympic Committee, the General Sports Authority, the Swimming Federation, the Dubai Sports Council, and the various sports organizations that supported him throughout the past stage for his presence in the largest sports forums.

Al Matrooshi added that he will focus on providing the best results in the important upcoming events, including the World Short-Distance Swimming Championships in Abu Dhabi next December, as well as the Arab and Gulf Swimming Championships, all of which are strong stations for all participating swimmers to gain new experiences and develop the level in the best possible way.

On the other hand, the country's ambassador to Japan, Shehab Ahmed Al-Fahim, stressed, during his visit to the headquarters of the athletes participating in the Olympic Games in Tokyo, that their giving and efforts in the name of the nation is the greatest evidence of their keenness to represent it in the desired image.

In press statements, he expressed his confidence that this year will witness the success of the two most important events ever, namely the Olympic Games in Tokyo and the Expo, which is hosted by the Emirate of Dubai, for the first time in the Middle East, Africa and South Asia, under the slogan "Connecting Minds and Creating the Future", stressing that such These events fill everyone with pride and joy, as they reflect the sincere state that everyone feels when seeing the flag of his homeland high in front of the entire world.

Al-Fahim added that "the Tokyo Olympics and the Dubai Expo are similar in will, determination and sincerity in implementing the events, despite the exceptional circumstances that led to their postponement for the current year, as the Tokyo Olympics began with a wonderful opening ceremony, and a unique organization, with full commitment to the precautionary measures and measures. To move forward in consolidating the concepts of success and challenge, which bodes well for presenting a successful and distinguished version of the Expo in the UAE, when it opens in Dubai next October.”

• Yesterday he participated in the 100-meter freestyle swimming competitions, and recorded a record of 51 seconds and 50 milliseconds.