The highlights and struggles in the career of the retired Bertens

Perhaps the best tennis star that the Netherlands has ever produced stops with Kiki Bertens. NU.nl describes the career of the 29-year-old Westland, who was eliminated in the second round of doubles at the Olympic Games with Demi Schuurs on Monday, based on highlights and struggles. 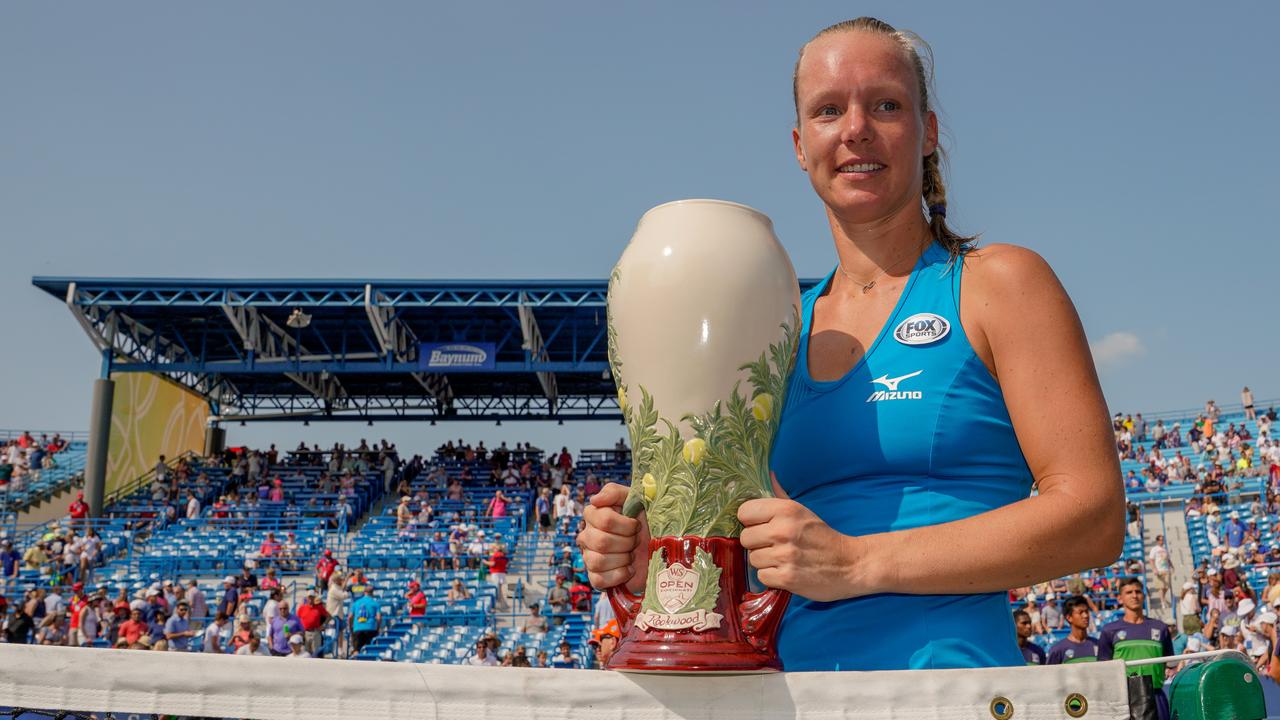 Perhaps the best tennis star that the Netherlands has ever produced stops with Kiki Bertens.

NU.nl describes the career of the 29-year-old Westland, who was eliminated in the second round of doubles at the Olympic Games with Demi Schuurs on Monday, based on highlights and struggles.

Just before Roland Garros in 2016, Bertens was 'only' the number 58 in the world, but she was able to measure herself for the first time with the world top at her favorite tournament.

In the preparation, the Wateringse already impressed by winning the clay tournament in Nuremberg from the qualifications and she continued that form in Paris.

Bertens immediately made a big impression in the first round with a three-setter against third-seeded Angelique Kerber, after which she reached the semifinals of a Grand Slam tournament as the seventh Dutchman via Camila Giorgi, Daria Kasatkina, Madison Keys and Timea Bacsinszky.

Due to a calf injury sustained in the quarterfinals, it was questionable whether Bertens would be able to play in the semifinals at all, but she tried anyway.

In the end, legend Serena Williams overpowered her on the French clay court, but Bertens had already put himself on the map and rose to the top thirty in the world in one fell swoop.

After that, Bertens would regularly start at Roland Garros as a title candidate, but she never lived up to those expectations.

De Wateringse never got further than the fourth round and last month - with the knowledge of now her last participation in Roland Garros - she was ingloriously eliminated in the first round.

Kiki Bertens reached the semifinals at Roland Garros in 2016, but had to acknowledge her superiority in Serena Williams.

Kiki Bertens reached the semifinals at Roland Garros in 2016, but had to acknowledge her superiority in Serena Williams.

2. Expectations cause pressure and stress for Bertens

Due to her semi-final place in 2016, expectations increased sharply and Bertens had great difficulty dealing with this, certainly in the beginning.

In fact, the struggle with media and fan pressure actually runs like a thread through her career.

Bertens prefers to play on a track in the lee.

Far away from the center court, the crowds of people and with it the stress.

That attitude had to do with a lack of self-confidence, which caused her to end up in a negative spiral during matches.

On more than one occasion, her coach had to come out on the track to pluck up her courage and get her mentally back on track.

After her surprising elimination in the second round of Roland Garros in 2017 - Bertens was tense because of her success from a year earlier - it was her then coach Raemon Sluiter herself who advised Bertens to seek help. She took that advice to heart, because a few weeks later, Bertens added action to the word by having conversations with a mental coach.

In the years that followed, Bertens showed that she had grown mentally and could cope better with adversity, but she continued to feel the constant pressure.

When she finally booked her first win of 2021 earlier this year after a long rehabilitation period from Achilles tendon surgery at the Billie Jean King Cup, she let her emotions run wild.

"It is logical that everyone has an opinion, but come and see how hard we are fighting instead of shouting everything."

Kiki Bertens regularly experienced stress due to expectations in her career.

Kiki Bertens regularly experienced stress due to expectations in her career.

3. Bertens proves his own wrong at Wimbledon

Bertens enjoys playing on clay, but she prefers to see the grass season come to an end as soon as possible.

More than once, the green mat had to pay for the leader of Dutch tennis, but in 2018 she proved her own wrong by setting her second best performance at Wimbledon at a Grand Slam tournament.

On the holy grass in London, where she never made it past the third round despite five participations until 2018, she made it to the quarterfinals fairly out of the blue.

Five-time Wimbledon champion Venus Williams and Karolína Plísková, among others, dropped off against the woman who prefers not to play on grass at all.

"This victory says a lot about my development. I am secretly quite proud that I have come this far in this tournament", Bertens said to

after reaching the quarterfinals

Precisely good friend Julia Görges kept her in a three-setter from the semi-final, but Bertens had already surpassed her own expectations.

Kiki Bertens surprised herself by reaching the quarterfinals of Wimbledon in 2018.

Kiki Bertens surprised herself by reaching the quarterfinals of Wimbledon in 2018.

With a quarter-final place at Wimbledon and titles in Charleston and Cincinnati, Bertens had the best year of her career in 2018, but in 2019 she definitely settled in the world top.

With a title in Saint Petersburg in his pocket, the pupil of then coach Sluiter played perhaps the best tournament of her career in May.

A year after she lost the final in Madrid, Bertens stood out above everything and everyone in 2019.

She did not lose a single set at the prestigious tournament in Spain and on her way to the title she defeated Roland Garros winner Jelena Ostapenko and Grand Slam title holders Sloane Stephens, Petra Kvitová and Simona Halep.

Due to her tournament victory, Bertens rose to fourth place in the world ranking and wrote history, because never before has a Dutch tennis star managed to reach the top four of the WTA ranking.

Bertens passed Betty Stöve, who in 1977 could call herself the number five in the world.

In the end, Bertens was 'only' in fourth position for a few months and was unable to return to the top four after that.

She is currently number 20 in the world.

Kiki Bertens won the clay tournament in Madrid in 2019 and as a result rose to the historic fourth place in the world ranking.

Kiki Bertens won the clay tournament in Madrid in 2019 and as a result rose to the historic fourth place in the world ranking.

Players like Roger Federer and Serena Williams (both 39 years old) still can't get enough of the game, but Bertens is their opposite in that regard.

The stress of being a top sporter influences her enjoyment of tennis and with her wish to have children in the background, one thing was certain: Bertens did not continue until well into her thirties.

Yet even Bertens years ago might not have thought that she would stop at the age of 29.

After a good start to 2020, including a new title in Saint Petersburg, things looked good.

But the corona pandemic brought tennis to a halt and changed Bertens' outlook on life.

Suddenly she was rid of the stress, traveling a lot and other obligations and she had time for other things.

When she said with a lump in her throat at her training location in Etten-Leur in Brabant on Wednesday that she will stop after this season, the relief could be read on her face. "I am more than ready for life after tennis. The tank is empty. A black hole? I am certainly not afraid of that," said Bertens, laughing out loud.