"Xin Wen" group regrets losing the mixed doubles, but still has to pay tribute to the veteran and Perseverance

On the evening of the 26th, Beijing time, the first gold medal in table tennis was awarded at the Tokyo Olympics. In the mixed doubles final, the Chinese combination Xu Xin/Liu Shiwen suffered a reversal after winning two games first, defeating the Japanese combination Mizutani Hayabusa/Ito Mima 3-4, but unfortunately won the silver medal.   In fact, at the Tokyo Olympics, the two also showed g 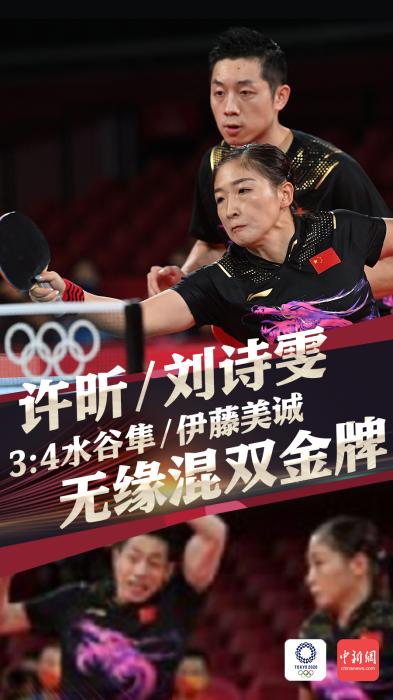 On the evening of the 26th, Beijing time, the first gold medal in table tennis was awarded at the Tokyo Olympics.

In fact, at the Tokyo Olympics, the two also showed great strength.

As the No. 1 seed of this tournament, they defeated Canadian and Romanian players to advance to the top four, and easily swept the dark horse French combination Lebesson/Yuan Jianan in the semifinals 4:0, and ushered in the Japanese combination Mizutani Hayabusa/Itomi Cheng's ultimate showdown.

Tonight's game can be described as another round of head-to-head confrontation between the Chinese and Japanese table tennis teams.

In the first game, the Chinese team entered the state faster, and Mima Ito made consecutive mistakes. Xu Xin's forehand slash gave them a 6-2 lead.

Xu Xin's serve put a lot of pressure on Mima Ito, and finally "Xin Wen" combined 11:5 in the next game.

In the second game, Liu Shiwen took the lead with a continuous backhand fastball, while the Japanese team was a little impatient and made mistakes one after another. Xu Xin/Liu Shiwen quickly got an 8:1 perfect start.

Later, in the multi-board draw, the Japanese group gradually recovered their status, but after the timeout, the "Xin Wen" group controlled the error and made another victory at 11:7.

In the critical third game, Mima Ito tried to disrupt the rhythm of the Chinese combination with a serve. Xu Xin's continuous backhand twist made his opponent make a mistake, and then the two sides fell into a fight.

However, the situation suddenly changed. At the end of the day, the Japanese team played tricky slashes several times, and Mima Ito's forehand diagonal pull helped the two to win the game with 11:8.

During a timeout, Ma Lin, the head coach of the "Xin Wen" combination, encouraged the two to be more determined in the game.

In the fourth game, Liu Shiwen used her fast-paced return to mobilize her opponent, Mizutani used her strength advantage to attack Liu Shiwen's forehand, and the two sides tied the score many times.

After that, the Mizutani Hayabusa fully fought, and a wide-angle attack helped the Japanese team to tie the score 11:9.

The morale of the Japanese team was greatly boosted.

Mima Ito further accelerated the shot speed in the fifth game, which put the Chinese combination into a difficult start.

The game entered a white-hot stage, and Mizutani's continuous forehand burst made them difficult to win by 11:9.

The "Xin Wen" combination needs to be broken!

Liu Shiwen blasted the ball with a forehand to force the Japanese team to hit the net. The Chinese team led 9:5, and then made persistent efforts to equalize the total score with 11:6.

The deciding game is suffocating.

The Chinese combination made mistakes and fell behind 0:8. The "Xin Wen" combination faced the opponent's forehand and blasted the ball vigorously, unable to find its own rhythm.

In the game, the two fought with all their strength to chase the score to 5:9, but the difference was too big before, and they finally lost with 6:11 regret.

This time they got a good start at the Tokyo Olympics. In a sense, they have realized their ardent hopes.

It is indeed a pity for Guoping to fail to win the gold medal.

But for the two elders, they have also tried their best!

This is the second time Xu Xin and Liu Shiwen have set foot on the Olympic Games. The former is 31 years old and the latter is 30 years old.

In Rio in 2016, they represented the Chinese men's and women's table tennis team and won two gold medals.

As two veterans, the two actually sacrificed a lot in this Tokyo Olympic cycle. In the face of personal honor and team honor, they chose the latter.

With the announcement of the list of athletes participating in the Tokyo Olympics in May, both Xu Xin and Liu Shiwen missed the singles arena.

For Xu Xin and Liu Shiwen, this is undoubtedly cruel.

After all, in the field of table tennis, the highest honor of a player's career is to become a Grand Slam player, and 30-year-old Liu Shiwen is only one Olympic singles champion from her Grand Slam.

In fact, in 2019, Xu Xin and Liu Shiwen both showed a strong competitive momentum in the singles arena.

They look forward to fulfilling their dreams in the singles arena in Tokyo.

However, the sudden new crown epidemic forced the Olympic Games to be postponed for one year.

During the epidemic, Liu Shiwen suffered a series of injuries. The older age and the troubles of injuries brought more uncertain factors to the preparations for the Olympic cycle. In order to travel to the Tokyo Olympics in the most secure way, the women’s team coach Li Falcon revealed in an interview that "Liu Shiwen's main focus on mixed doubles and team competition is also a decision made by the team and the players in unison."

Indeed, the mixed doubles gold medal is the first gold medal in the Tokyo Olympics table tennis event, and each representative team can only send a pair of combinations to participate, the Chinese team is facing tremendous pressure.

Data map: Xu Xin and Liu Shiwen in the game.

Since the pairing, the two have won many championships in world competitions and have become the players with the highest technical level in the men's and women's doubles in the national table tennis at this stage.

"Her speed is relatively fast and she receives the serve very well. Compared with other foreign male players, there is actually no difference.

"My partner with Xu Xin feels very kind, and I am indeed very grateful to Xu Xin, but I have always believed in me, and in my injury... It can be said that it is a year, waiting for me, or treating me I am very confident and give me a lot of courage and motivation. (Xu Xin) can be said to be a warm big boy. He is still very childish and naughty in his heart. "This is Xu Xin and Liu Shiwen. The evaluation of each other and the tacit cooperation of the two have also become a great weapon in the mixed doubles arena.

Facing the younger Japanese team tonight, although the "Xin Wen" combination failed to help the Chinese team win the first gold in this year's table tennis event, when they fell behind by a big score in the deciding game, the two did not choose to give up. Using the tacit understanding of the two to continuously attack the opponent's forehand, the difference was once reduced to 5-9.

Competitive sports is so cruel.

The disappointment of the fans is understandable, but as an athlete in the Olympics, who doesn't want to win?

There is no victorious general in the world. Victory or defeat is a matter of military affairs.

In any case, we still have to pay tribute to the two veterans who dare to face the challenge!

In fact, looking at this Tokyo Olympics, there is no shortage of veterans in many events, and they continue to stick to it.

Regardless of success or failure, it is worthy of respect.

The picture shows the curtain call for gymnastic mother Chusovkina.

This is the eighth time that gymnastics veteran Chusovikina has participated in the Olympics. She has gone through 30 years in gymnastics, and the years have not polished off her love in her heart; "Four Dynasties" Pang Wei once again set off for Tokyo Although she failed to win the gold medal, she is still the backbone of the team; Taekwondo star Wu Jingyu returned after giving birth and stopped the resurrection match, but the President of the International Olympic Committee Bach came to see her off in person...

This moment has already surpassed the victory in the arena.

The persistence and dedication of the veterans for their dreams is already the best interpretation of sportsmanship.

We have seen the loss of the night, but we must not forget the sweat and hard work of five years of hard work.

The "Xin Wen" group has made a lot of effort and sacrifice in the Tokyo cycle, and they deserve everyone's applause!