Tunisia shines with El Hefnawi gold.. The outcome of the second day of the Tokyo Olympics (photos)

The Tunisian star shined for the second day in a row at the Tokyo Olympics, with the young swimmer Ahmed Ayoub El Hefnawi hijacking the gold medal in the 400m freestyle, the first Arab gold in the Games, which also witnessed the Australian women's breaking of the world record by winning the gold in the relay race 4 times freestyle. 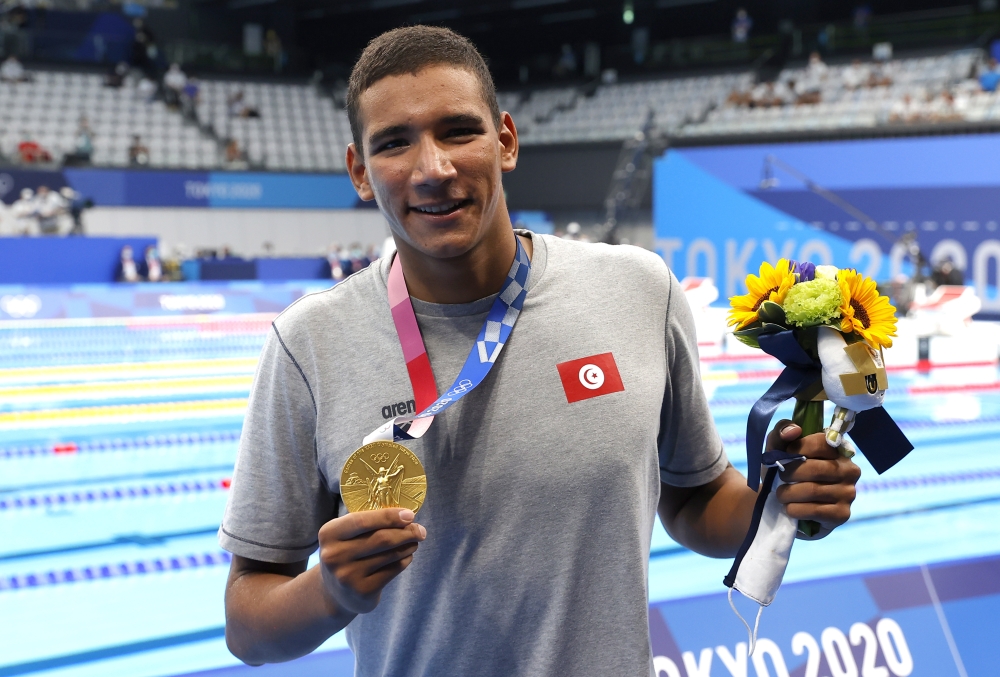 Tunisia shines with El Hefnawi gold.. The outcome of the second day of the Tokyo Olympics (photos)

Tunisia's star shined for the second day in a row at the Tokyo Olympics, with young swimmer Ahmed Ayoub El Hefnawi snatching the gold medal in the 400m freestyle, the first Arab gold in the Games that also witnessed the Australian women's breaking of the world record by winning the gold in the relay race 4 times freestyle.

El Hefnawy, 18, achieved a remarkable achievement by recording a time of 3:43.36 minutes, the third best time this year, ahead of Australian Jack McLaughlin by 0.16 seconds and the young American Kieran Smith by 0.58 seconds.

"I can't believe it, that's great. This morning I felt better than yesterday. I'm an Olympic champion now," El Hefnawy told NBC after his coronation.

The young man, born on December 4, 2002, continued, "I put my head in the water and this is what happened. I can't believe it, this is a dream that has come true."

From the first moment, El Hefnawy remained among the leaders in the race and was the first to arrive, to win the second gold in swimming after the coronation of the American Chase Kailich in the 400m medley.

This is Tunisia's second medal in these games, after Mohamed Khalil Jendoubi won a silver in the 58-kg weight category on Saturday.

The Turkish city of Antalya was the last preparatory stop for Al-Hafnawi before his first participation in the Olympic Games.

El Hefnawy will also run in Tokyo in the 800m race, after his brilliance and winning titles in the 400 and 800m races in the French championships.

The former Tunisian swimming champion Osama Mellouli, crowned with the 1500 m freestyle gold in Beijing 2008 and 10 km in London 2012, had previously talked about the possibility of El Hefnawi's rise to the podium at the Paris 2024 or Los Angeles 2028 Olympics, but El Hefnawy had another opinion after winning this Early coronation.

The Tunisian Swimming Federation indicated at the end of last year that El Hefnaoui was studying at the French Sports Institute Pierre de Coubertin and was training in Tunisia under the supervision of coaches Sami Ashour and Gebran El Taweli.

The third is fixed

At the women's level, the Australian women broke the world record on their way to winning the 4x100 freestyle relay gold on Sunday, retaining their titles from Rio 2016 and London 2012.

The Australian team finished the race in 3:29.69 minutes against Canada, which won the silver medal by 3.09 seconds and the states United Bronze by 3.12 seconds.

The Australian team broke the record set by itself in April 2018 at the Commonwealth Games (3:30.05 minutes).

This is Australia's first gold in the Tokyo Olympics and the third in total (silver and bronze).

Three of the female swimmers who were crowned in Rio and also set a world record at the time were the sisters Bronte and Kate Campbell, in addition to Emma McKeon, while Meg Harris won her first medal after replacing Brittany Elmlay.

And in a funny moment on the podium, and given that every athlete or athlete crowned in the games takes his medal from the Chinese and puts it around his neck in respect of the existing laws due to the Corona virus pandemic, the players chose to put the medals on each other's necks.

The second day of the women's tennis competitions at the Tokyo Olympics witnessed two big surprises, represented by the exit of world number one Australian Ashleigh Barty and Tunisian Anas Jaber, one of the candidates to compete for the title from the first round, at the hands of Spaniards Sarah Soribes Tormo and Carla Soares Navarro, respectively.

Japan's second-ranked Naomi Osaka, for her part, returned to the ground after a voluntary denial, easily crossing to the second round at the expense of Chinese Sai Se Jing in her first match since her controversial withdrawal from the French Open.

Osaka, the Australian Open champion, has not played since May when she deemed her media commitments harmful to her sanity.

On the second day of the Games, which witnessed the award of 18 gold medals, the American Chase Kailich was crowned in the 400-meter medley in swimming, after the resounding exit of the Japanese Daya Seto from the qualifying.

Hungarian Katinka Hossou, who has dominated this competition since setting the world record at the 2016 Rio Olympics, competed in the first 200 meters of the race, but failed to settle matters as usual, finishing fifth.

On the other hand, Japan's Yuto Horigumi became the first Olympic champion in skateboarding after clinching the gold in the street competition Sunday.

Skateboarding was included in the Olympic program for the first time through two competitions (streets and park) for men and women.

American gymnastics legend Simone Biles is preparing for the start of her journey, as she may become the first woman in more than half a century to retain her title in the full competition.

Biles intends to raise the total number of her medals in the Games to nine golds, equaling the record of the Soviet Larisa Latynina achieved in 1956, 1960 and 1964.

Kevin Durant leads the US basketball team in a fiery confrontation with France in the first round of the group stage, while the veteran Dutch bike, Anna van der Bergen, twice world champion, monitors gold again in the road race, after winning the last Rio 2016 Olympics.

While a tropical cyclone is expected to generate high waves, the surfing competition could be exciting at Tsurigaski Beach, 100 kilometers from Tokyo.