Tokyo 2021: Simone Biles, a legend of the gym never satiated, despite a life of trials

Quadruple Olympic champion, the American Simone Biles entered the Tokyo Games as the favorite. Gym superstar, one who is considered one of the best athletes… 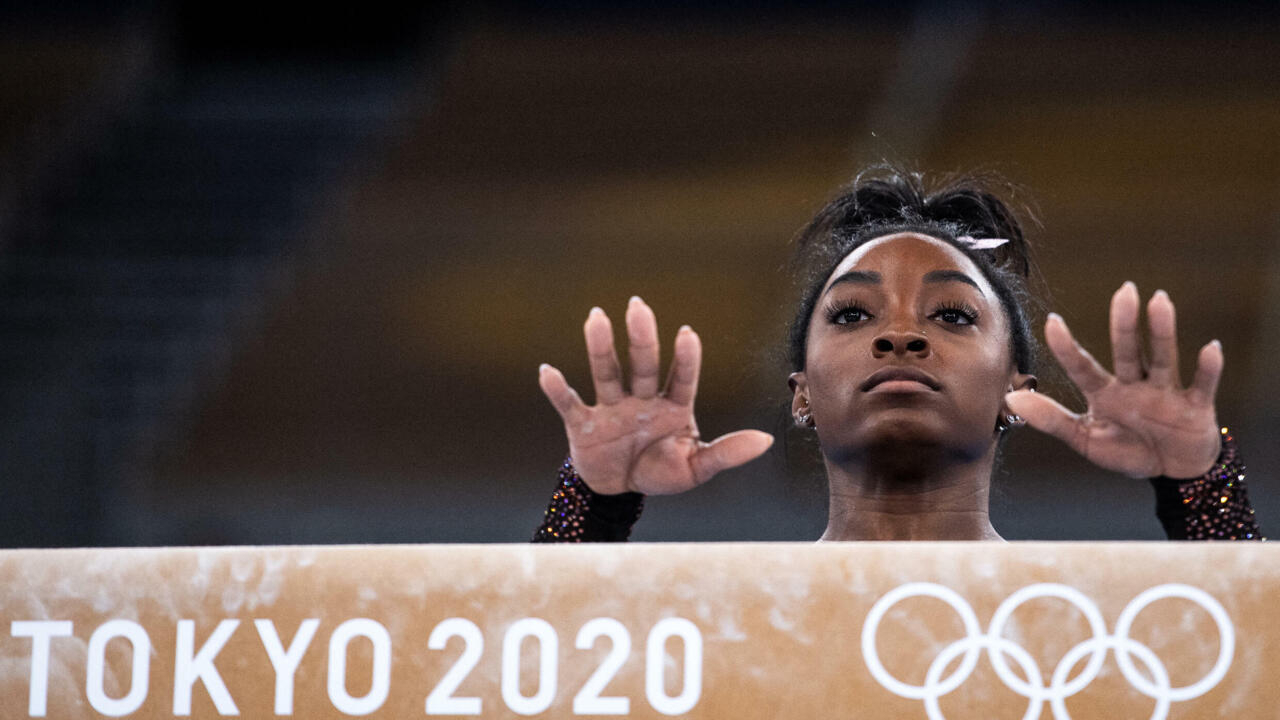 At 24, Simone Biles has already won everything.

With four Olympic gold medals and 19 world titles, his trophy cabinet is overflowing.

The American has nothing more to prove, but she is approaching the Tokyo Games, where she will compete on Sunday July 25, always with the same desire to surpass herself.

"From the moment I enter a competition it's always so stressful because I always try to do better," she summed up in April during an interview on the Today show.

"I'm trying to fight myself."

For her second participation in the Games, the figurehead of the American gymnastics team competes in the all-around (team and individual), and is favorite on floor and vault where she excels. It could approach the record held by the Soviet Larissa Latynina, victorious in Tokyo in 1964, of 9 Olympic titles. To beat him, the challenge is nevertheless met because he would have to achieve a faultless and win the six gold medals at stake, especially on uneven bars which are not his forte. Long awaited, she will have "pressure on her shoulders", concedes her trainer, the French Laurent Landi who has been coaching her since 2017 with his wife Cécile Landi.

Star on the gymnastics mats, the American has also become an icon outside.

As proof, a few days ago she became the first sportswoman to have her emoji on Twitter.

The latter represents a goat wearing a leotard, a gold medal around the neck, a reference to the title of best gymnast in history ("Greatest of all time", or GOAT, a word which means goat in English), that she readily claims.

Simone Biles is the first Olympian to receive her own Twitter emoji. # Simonebiles #simonebiles

She heads to Tokyo as Twitter's most-mentioned US competitor.

Simone Biles herself has started competing in a leotard adorned with a sequined goat's head in order, she says, to spark vocations.

"I hope the kids who watch are no longer ashamed of being good at anything," she said recently in an interview.

His physique (1.45 m for 47 kg), his running power, his explosiveness and his sense of balance have allowed him to outrageously dominate his discipline for several years.

She even already has four figures to her name, two on the floor, one on the beam and another on the floor.

Not qualified for the London Games in 2012, due to her age (she was not yet 16 years old), she began her medal harvest a year later at the Worlds.

Today in full light and in full glory, the gymnast was not born under the best auspices.

Simone Biles finds herself very early on in a foster family with her three siblings.

His mother, alcoholic and drug addict, neglects them and cannot take care of them.

It is ultimately his maternal grandfather and his wife who welcome them to Texas and adopt them.

It was there that she discovered gymnastics at the age of 6, and two years later met her trainer, Aimee Boorman.

"I always said she was my second mother because she's been by my side since I was 8," Simone Biles told NBC.

"Each year our bonds grow stronger and we understand each other better and better."

Thanks to this special relationship, the Texan quickly rose through the ranks of national and then world gymnastics.

Having become a star in her country, she even goes beyond the borders of her sport.

The sponsors are snapping up and on her Instagram account, she has more than four and a half million subscribers.

The gymnast has also become an inspiration to the African-American community.

She posted messages and gave interviews in support of the "Black Lives Matter" movement.

She also encouraged her fans to vote for Joe Biden in the last US presidential election.

She is also very close to the Obamas.

Despite herself, the young woman has also become a symbol of sexual violence.

In 2018, after years of silence, she revealed to be one of the victims of former national team doctor Larry Nassar.

"There are many reasons why I hesitated to share my story, but I now know that it is not my fault", then explained the gymnast in a statement.

"It is not normal to receive such treatment from a trusted doctor."

(...) This behavior is completely unacceptable, disgusting and abusive, especially coming from someone who I have been told to trust, "she added.

Emotional @Simone_Biles expresses frustration toward USA gymnastics at the 2019 US Championships.

The champion then sued the American federation for failing to protect it from this sexual abuse and requested the opening of an independent investigation.

Simone Biles has since confessed that it took a while for her to appreciate her discipline again.

“Everything I've been through with the federation and rediscovering the love of the sport and just being Simone, it's been a long way until now,” she told NBC last June.

More recently, his brother Tevin Biles-Thomas was charged with a triple murder before being finally acquitted. He was arrested in 2019 after a shooting that left three people dead on New Year's Eve in Cleveland, Ohio. Simone Biles never commented on her brother's legal troubles. “I'm trying to digest, don't talk to me,” she simply wrote on Twitter in August 2019.

Little spared by life, the gymnast is on the other hand blessed by the gods of the stadium.

In Tokyo, her biggest opponent will certainly be herself.

In Ariake's gymnastics center, her rivals seem harmless compared to her immense talent.

Simone Biles will however have to be wary of her teammates, the Americans Sunisa Lee or Jordan Chiles, and of course the Russians, like Viktoria Listunova, just 16 years old, brilliant at the last European Championships, or Angelina Melnikova, royal at the bars.