(Tokyo Olympics) General news: The Chinese Legion collects three more golds and the Chinese women's volleyball team loses their first battle   China News Service, Tokyo, July 25 (Reporter Wang Zumin) After the 3 golds were received on the first day, the Chinese Army collected 3 more golds on the second day of the official start of the Tokyo Olympics, and continued to temporarily rank first on the 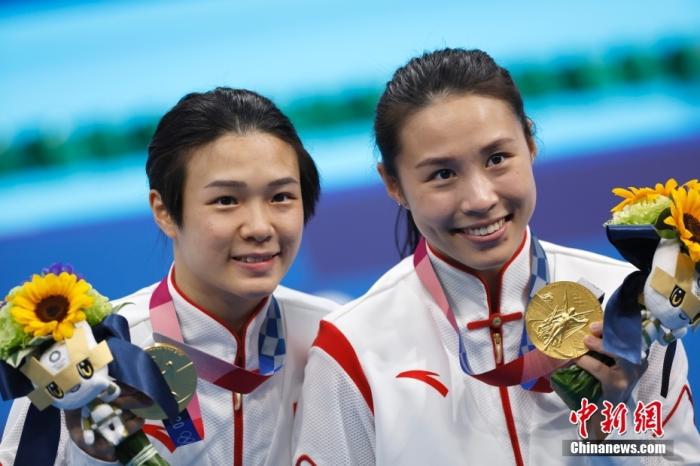 China News Service, Tokyo, July 25 (Reporter Wang Zumin) After the 3 golds were received on the first day, the Chinese Army collected 3 more golds on the second day of the official start of the Tokyo Olympics, and continued to temporarily rank first on the gold medal list with 6 gold medals.

A total of 29 gold medals were decided two days before the Tokyo Olympics.

Except for the Chinese team, which is temporarily at the top of the list, the host Japanese team won 4 golds on the 25th and temporarily ranked second with 5 gold medals.

The US team, which won 4 gold medals, ranked third, and the South Korean team ranked fourth with 2 gold medals.

The other 12 gold medals were divided among 12 delegations.

On the same day, the women's double three-meter diving final of the Tokyo Olympics was held at the Tokyo Aquatic Center. Chinese combination Shi Tingmao and Wang Han won the gold medal with 326.40 points.

The Tokyo Olympic diving competition kicked off on the 25th.

In the men's 61 kg competition, Li Fabin won the first men's event gold medal for the Chinese delegation by setting two Olympic records in clean and jerk and total score.

There was also a breathtaking scene in the game.

After the game, Li Fabin said that he had done similar actions in previous games and training, but he had been criticized by the coach, "I hope everyone will not imitate."

If Li Fabin wins the championship, then Chen Lijun's gold medal will be thrilling.

In the men's 67 kg weightlifting finals, Chen Lijun ranked fourth after the snatch, reversing the clean and jerk and winning the sixth gold medal for the Chinese delegation.

On the shooting range, two "post-00s" who participated in the Olympics for the first time won two medals for the Chinese Army.

Due to the particularity of the event, shooting is often a gathering place for "old" players.

In the women's 10-meter air pistol arena, although the Russian players won the championship and ended the Chinese team's three consecutive championships in the event, the "post-00" Chinese teenager Jiang Ranxin won the bronze medal.

The two shooting teenagers are also known as "reserves" for the Paris Olympics.

In this campaign, the Chinese team was in a sluggish state and was passive throughout.

The Chinese women's volleyball coach Lang Ping said after the game that Zhu Ting's injury was serious and his wrists were not strong.

The defeat of Zhao Shuai, the Rio Olympic champion and the flag bearer of the Chinese delegation, is even more sigh.

In the men's 68 kg taekwondo semi-finals, Zhao Shuai led the first two rounds. He was overturned by his opponent in the third round. He lost to the British star Hinton 25-33 and missed the final.

In the quarter-finals, she lost to Iranian star Arizad by one point and missed the semi-finals.

The mixed doubles of table tennis, which entered the Olympic Games for the first time, played in the quarter-finals and semi-finals on the 25th. The Chinese combination Xu Xin/Liu Shiwen defeated Romanian and French players with two 4:0 respectively, and successfully advanced.

Two pairs of the world's strongest mixed doubles will join the finals and compete for the first table tennis mixed doubles gold medal in Olympic history on the 26th.

The swimming pool gold medal battle started on the 25th.

The Chinese women will break the Asian record for the women's 4x100m freestyle relay and won the seventh place.

The Australian team won the championship and broke the world record, which is also the first world record born in this Olympic Games.

The first swimming gold medal of this Olympic Games was won by American athlete Khaliz.

But for the Chinese swimming team, the bigger gains that day came from the preliminary and semi-finals.

In the semi-finals of the women's 100m butterfly, Zhang Yufei, who bears the hope of winning gold in Chinese swimming, swam 55.89 seconds and broke the "56-second mark" again after the preliminaries on the 24th.

She was also the only player in the semifinals to swim in "56 seconds".

In the men's 100m breaststroke semi-finals, Yan Zibei, the third runner-up of the 2019 World Championships, advanced to the final in 4th place.

In the three-person basketball arena, the Chinese team has good news and bad news.

On the 25th, the Chinese women's team Lienke's 2018 World Cup champion Italy and the world's number one French team have a current record of 3-1.

The Chinese men's basketball team suffered a four-game losing streak after losing to Latvia and the Netherlands.