Adriana Cerezo: the movies of Jackie Chan, grandfather's secret and an anxiety break

They say that a few days ago, with an extraordinary 13 out of 14 in Selectivity, Adriana Cerezo opened the computer with the idea of ​​enrolling in Biochemistry and that she closed it ... 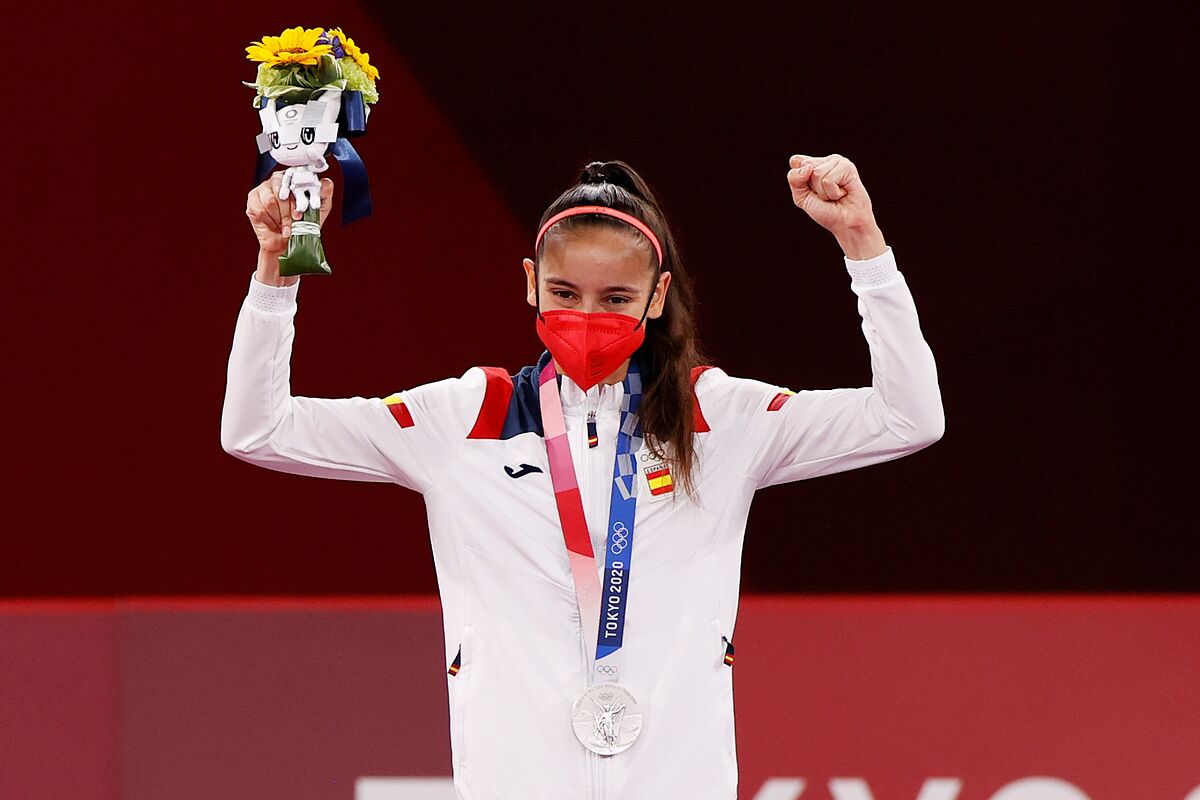 They say that a few days ago, with an extraordinary 13 out of 14 in Selectivity,

opened the computer with the idea of ​​enrolling in Biochemistry and that she closed it enrolled in Criminalistics. "Perhaps it is the only moment in which I have seen her doubt", jokes the Finnish

, who was her teacher and today is her 'sparring'. Together they prepared these Tokyo Olympic Games at the Hankuk gym in San Sebastián de los Reyes and under the command of coach

, but before that moment, before the silver medal this Saturday, there was a lot.

"His story is beautiful because he got the taekwondo bug watching

in an old video. His parents wanted him to play sports, but they weren't convinced by martial arts, so it was his grandfather

the one who sneakily took her to her neighborhood gym. Until he showed up for his first exam for a belt, neither of them said so at home. Then, as they saw that she enjoyed more than tennis or figure skating, her parents supported her a lot, as did her grandmother, who always took her to training and would wait for her sitting there for whatever it took, two, three or four hours "says Ramal, on the phone, just before speaking with his ward, since he is not in Tokyo because of the restrictions. He gets excited and asks to stop when Cerezo claims him, but then very kindly takes up the narration.

The new Olympic medalist started at the Alcalá by Adidas Sports Center, a gym that is under her house, but at age 11 she needed a change and was recommended by Ramal's advice.

"When he arrived with us, he did not want to compete. The competition created anxiety, he did not like it, and I told him that perfect, that there was no problem. 'Train for fun', I asked him, but after 15 days he already asked me if she could sign up for a tournament. Do you know what happened? Suvi [Mikkonen] was competing in the World Cup and we started taking Adriana on all trips. She loved the atmosphere, changed her vision and look at her now how well she is It always happens ", Ramal explains that together with Mikkonen, also his partner, they have welcomed Cerezo, only 17 years old, as if she were their daughter.

"For me her best weapon is her joy. Her advantage is that she enjoys. But not only a competition as big as the Olympic Games, which is to be enjoyed. She enjoys every training session. If Jesus gives her a day off, she asks to train. because it is what makes him happy ", analyzes Mikkonen, born in Dragsfjärd and neighbor of

since she was a teenager, who was fifth in the London 2012 Games and third in the 2014 European Games." Jesus tells her that she is a bug, he calls her "the bug", and she's right. The moment I met her, in a couple of days I already knew that she would go far because of that spark, that hyperactivity, that non-stop and also because of her technical qualities, of course ", the taekwondo player who, by far, has faced Cerezo the most times.

For the past six years, practically every day one against one, the young woman learning from the veteran and the veteran ... "It's just that what she's doing amazes me. How could I not learn. She has legs that aren't normal. She can do anything and she does it, because she is very creative. She is left-handed, but she seems practically ambidextrous because she hits the same with both legs and then moves them in a way, she is so elastic ... And one thing I will say: she still has much more. The world is going to freak out. She is more ambitious than the rest. Shall I tell you what she said to me one day? "Mikkonen asks and you can already imagine the answer:" She told me that she wants to be number one, but number one of the story. The best ever. "

And, although the road is long, it has already started. A few months ago, in April, he won the European Championship in his first absolute competition, then he swept the Pre-Olympic in May and this Saturday he achieved his first Olympic metal. The year of hiatus due to the coronavirus has not been so good for any other Spanish athlete and that, while training at home, during confinement, one day he came up and cracked his father

He, like Cerezo's grandparents, is a native of Navezuelas, a town in Extremadura where they put up a giant screen to celebrate the silver of his countrywoman, who spends summers there.

If the predictions of her coach and her teacher are true, the girl who fell in love watching martial arts movies, the grandfather's granddaughter who hid her to go to the gym, the teenager who overcame competition anxiety, will offer them during years many, many afternoons of joys more in the municipal pavilion.

Tokyo OlympicsInterview with standard bearer Saúl Craviotto: "When it's not in fashion, I'll keep my feet on the ground"

Tokyo GamesAleix Heredia, the rare modern pentathlon, the flight from football for "the environment" and cosmetic surgery