Three victories over Asia and defeat from the Netherlands: how the Russian national basketball teams 3 x 3 started at the Olympics

At the Olympic Games in Tokyo, the first competitive day in 3 x 3 basketball ended. The Russian women's team first, in a tense struggle, prevailed over the hosts of the tournament, and then defeated the Chinese women with a difference of 10 points, thus leading their group. The men's national team also started with a confident victory over the representatives of the Celestial Empire, but in the second session they could not cope with the Dutch, having missed 11 of 12 shots from beyond the arc. 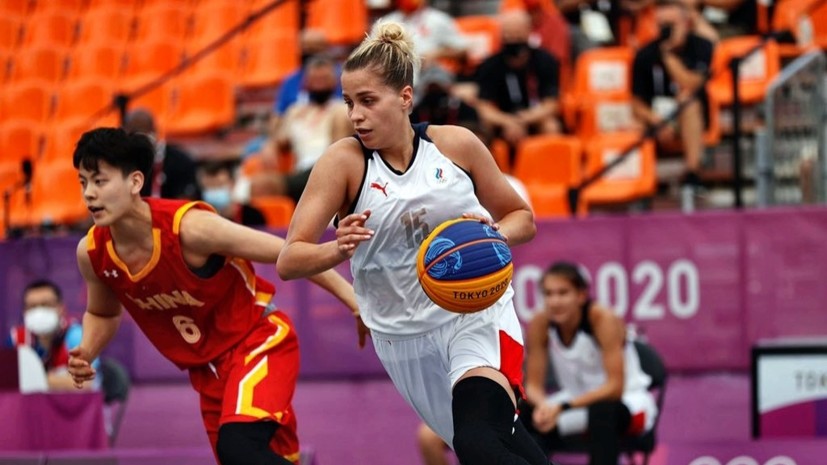 One of the main events of the first day of the Tokyo Olympics was the debut of basketball 3 x 3. The proposal to include it in the program of the Games was put forward back in 2012, but it was only possible to get approval after the tournament in Rio de Janeiro. Thus, the athletes had to wait a long nine years to finally demonstrate their skills at major competitions. As for the Russians, they not only came to the tournament in the status of leaders of the combined FIBA ​​rating, but also had the honor to take part in the opening match. Within its framework, the women's team met with the hostess of the championship - Japan.

Girls from the Land of the Rising Sun ranked eighth in the FIBA ​​rating and had the right to be considered dangerous opponents. However, it took the Russian women a little less than three minutes to secure themselves a comfortable advantage and lead 10: 2. At the same time, the twin sisters of Frolkin were especially zealous, who chalked up a total of eight points. Evgenia mainly specialized in close range throws, Olga bombarded from beyond the arc. Running ahead, for the entire 10-minute meeting, she performed four two-pointers, three of which converted.

It is not surprising that by leading with such a score, the Russians eased the pressure a little and almost paid for it. The next seven minutes passed under the dictation of the Japanese women who won the 16:11 segment. Less than a minute before the final whistle, the hosts of the Games reduced the gap to one point, but at a key moment the national team again began to operate "long-range artillery". Yulia Kozik's two-point throw hit right on target and set the final score on the scoreboard - 21:18.

Four hours later, the Russian women's team entered the arena of the Aomi Urban Sports Park for the second time, and its opponent was the strongest team in Asia according to the FIBA ​​rating - China. However, after the reshuffle of the opponent, the sum remained practically unchanged, at least in the opening. Alexander Diratsuyan's wards again gave a phenomenal starting spurt and took the lead with a difference of nine points (11: 2), and subsequently did not miss their own. This time, the percentage of realization of long-range shots was not so unsurpassed (38% versus 63%), but this was enough for a confident victory. The most important role was played by six offensive rebounds, and this is subject to the presence of a 195-centimeter Zhitin Zhang in the enemy. By the way, it was she who became the worst of the representatives of the Celestial Empire in terms of the number of hits from the game (0/4). Lily Wang also never distinguished herself, but she tried only once.

The difference from the first meeting at the tournament was the lack of relaxation in the game of the Russian national team in the second half.

Yes, the remaining six minutes were won by only one point (8: 7), and Zhiyuan Wang got too much freedom (four points in total).

But the breakthroughs under the Kozik ring, coupled with long-range throws by Anastasia Logunova and Olga Frolkina, did their job.

The latter again scored seven points on duty and became the best among compatriots in this indicator for the second time in a row.

At the end of the meeting, Logunova explained why the Russians dealt with the Chinese women more confidently than with the Japanese women, and confirmed that she knew about the presence in the stands of the former center club of the National Basketball Association (NBA), Houston Rockets, Yao Ming.

“The first matches of the day are always difficult for us, and the second match, as a rule, is always easier. We completely controlled the course of the game with the Chinese women: a good attack, a lot of open shots, implementation. Of course, we know that we won in front of Yao Ming - he was not only sitting on the podium, we were in the common area before the game, ”Logunova told RIA Novosti.

An hour later, representatives of the men's 3 x 3 basketball team entered the Olympic site for the first time. They also had to pass the test by the Chinese team, which in recent years has slightly lost its position in the world table of ranks. The superiority of the Russians was reflected in the course of the meeting, which ended in their favor with a score of 21:13. The title of the main character was unambiguously earned by Alexander Zuev, whose share accounted for more than half of the total points of the team (12). The athlete hit four times from close range, implemented three of six long-range throws, as well as two free throws.

The match between the men's teams of Russia and China was fundamentally different from the confrontation between the women's. For more than six and a half minutes, the opponents were in no way inferior to each other, and for 3 minutes 24 seconds before the end, both had 12 points each. During the remaining time, the athletes tried on the ring six times, but if the domestic basketball players hit the target five times, then their counterparts only once. First, Kirill Pisklov shot from behind the arc, then Zuev scored five points, and the victorious, 21st point, went to Ilya Karpenkov.

“Yes, before the debut of basketball 3 x 3 at the Olympics, before our debut, there was excitement, such a good excitement, which with the beginning of the game turned into additional energy. It's great that we finally started, it took a long time to get there, I wanted to start playing. At first it was hard, they walked exactly with the Chinese, they were no more than two or three points behind. Then we hit a couple of times from a distance, defended ourselves, which led to the victory. The key hit was with Kirill Pisklov, of course, not mine, ”Zuev said modestly.

However, domestic athletes failed to extend the successful streak. In the second round, they faced a much more powerful rival in the face of the Dutch and wavered. Zuev and the company began to fail too often in defense, and under severe pressure from the defenders, they stopped hitting from afar. In ten minutes, the Russians threw 12 times from the distance, but the ball was in the net only once. Alexander himself missed all three attempts, and Stanislav Sharov - five.

With such a low percentage of hitting two-pointers, it was extremely difficult to fight for victory. Even taking into account the fact that under the ring the Russian national team looked pretty good. So, she noticeably surpassed the Netherlands in the number of rebounds (20:13), and 205-centimeter Ilya Karpenkov implemented six of seven shots. However, in defense, domestic basketball players were not so good, failing to neutralize the enemy leader. 30-year-old Dimeo van der Horst proved to be a real sniper, not falling below the 50% bar both when attacking from close (3/6) and long (3/5) distances. With nine points, the native of Amsterdam became the best sniper of the team and helped him get the upper hand - 18:15.

Thus, the Russian basketball players made it a little difficult for themselves the task of winning a direct ticket to the semifinals of the Olympic Games in Tokyo.

According to the competition formula, all eight teams participating in the group stage play against each other, after which the two best immediately go to 1/2, and four more - to 1/4.

They will try to correct their situation tomorrow - in the matches with Belgium and Poland.

As for the Russian women's team, the two victories helped her share the first place in the group with the US national team.

On the second day, the Russian women will have to measure their strength with the Stars and Stripes, however, after the meeting with the basketball players from Mongolia.