The refusal of the Algerian due to the fight with the Israeli and the lack of medals for the US team: what will be remembered for the first day of the Games in Tokyo

Algerian judoka Fethi Nurin withdrew from the competition to avoid meeting with Israeli Tohar Boutbul. Swimmer Maxim Stupin told how, instead of his passport, he mistakenly took his father's document for the pre-Olympic training camp in Vladivostok. Cyclists Alexander Vlasov and Ilnur Zakarin did not receive food during the race due to a mistake by the organizers. And the Americans failed to win a single medal. What is the memory of the first day of the Games in Tokyo - in the RT material. 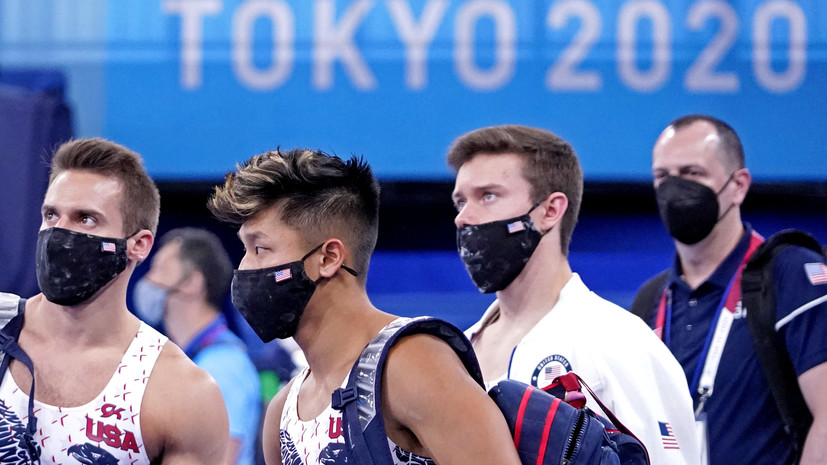 The first competitive day of the Olympic Games brought Russia two medals at once.

And taekwondo fighter Mikhail Artamonov also quite unexpectedly became the third in the weight category up to 58 kg, although before the start of the competition he was not quoted as a favorite.

But domestic athletes could have had more awards.

The judokas failed to please.

Robert Mshvidobadze (up to 60 kg) and Irina Dolgova (up to 48 kg) were eliminated already at the 1/8 final stage.

At the same time, both were considered contenders for getting into the top three.

“Unfortunately, at the Games, they tactically lost their fights - Robert dominated, but, having made a mistake, he could not recoup.

And although the situation turned out to be controversial, the judges decided so ", - quotes the words of the sports director of the Russian Judo Federation Kirill Denisov TASS.

However, the competition in this form was more remembered by the scandal with the participation of the Algerian Fethi Nurin.

He withdrew from the Olympics to avoid a meeting with Israeli Tohar Butbul, whom he could cross in the second round.

The International Judo Federation condemned the athlete's act and temporarily suspended him from the competition.

As a result, the representative of Chinese Taipei Yang Yongwei won the men's victory, and the Kosovar Distriya Krasniki won the women's victory.

This OI award is only the second in history for Kosovo.

The Russians also failed to please in fencing.

In the men's saber, the highly ranked Kamil Ibragimov in the quarterfinals suffered an offensive defeat to Kim Jong Wan - 14:15.

The domestic athlete led 14:12 and was in one precise shot from victory, but managed to miss three in a row and lost.

After the departure, Ibragimov could only admit that he had an extremely unsuccessful ending and could not "solve" anything.

Camille also complained that it was not the first time that the opponent behaved unsportsmanlike: he simulated, fell and lay on the platform.

In turn, Aizanat Murtazayeva made it to the bronze medal match in the epee competition, but there she lost without a chance to the Estonian Katrina Lekhis - 8:15.

When I went to Tokyo, I dreamed of winning, of course.

Here everyone is strong, whether it is the 2nd or the 15th, there is no difference, "the fencer is quoted by Match TV.

But experienced Violetta Kolobova, winner of the Olympic Games and two-time world champion in command epee, performed extremely unsuccessfully and flew out in the first round.

So, Arina Surkova and Svetlana Chimrova reached the next stage at a distance of 100 m butterfly.

Anton Chupkov and Kirill Prigoda made their way to the semifinals on the 100m breaststroke.

On the other hand, the Russian women's team failed to secure a place in the decisive 4 x 100 m freestyle.

Alexander Egorov and the reigning European champion Martin Malyutin took off in the 400m freestyle.

However, this view is not profile for him.

Failed to please and Maxim Stupin, who replaced Ilya Borodin who was sick with coronavirus.

And after the finish, the athlete said that he traveled to Tokyo with great adventures.

To collect in Vladivostok, he mistakenly took his father's passport instead of his.

Stupin had to return to Moscow for documents in order to be able to fly to Japan.

“The coach said not to think about this situation, pay no attention and do his job.

The situation is specific, it was very difficult for me, ”he quotes.

Not without unpleasant oddities in the competition of cyclists.

It turned out that Russians Alexander Vlasov and Ilnur Zakarin did not receive food during the road race.

As a result, the first took 59th place, and the second could not finish at all.

“Representatives of the teams from Azerbaijan, Spain, Kazakhstan and our employee could not get to the second food point and give it to the riders. This happened through the fault of the organizers, the bus stopped in the wrong place, and the situation could not be resolved at the right time. Unfortunately, our riders and riders from several other teams found themselves in this position. This, of course, aroused the discontent of all the teams that failed to help the athletes in time, ”explained the head coach of the Russian national cycling team on the highway Irakli Abrahamyan.

Domestic volleyball players under the leadership of Tuomas Sammelvuo left no chances for Argentina - 3: 1.

At the same time, they managed to lose the first set, but later they got together and won a strong-willed victory.

In turn, the water polo players barely overcame China - 18:17, and the coach of the national team Andrei Belofastov complained about their weak defensive play.

“It will be more interesting further, it cannot be worse in defense.

Together with the headquarters, we will watch the game and prepare for the Hungarians.

We have a lot of material on them, we know them very well.

Hungary is higher in class than China, but the Olympics are generally a different level, ”the specialist noted.

Thus, the assets of Russia include silver and bronze.

China is leading in the unofficial team standings with three gold medals.

But the Americans for the first time in 49 years at the end of the starting day of the Summer Games were left without medals at all.