The expert: "Almost more impressed than in the US match"

Sweden is ready for the Olympic quarter-finals - and praise for the turnaround by SVT's expert Markus Johannesson. - I am almost more impressed in this match than in the US match. Sweden was not very good today, but had to admit color and turned inferiority. If you want to go far in a championship, you have to win the shit matches, says Markus Johannesson to SVT Sport. 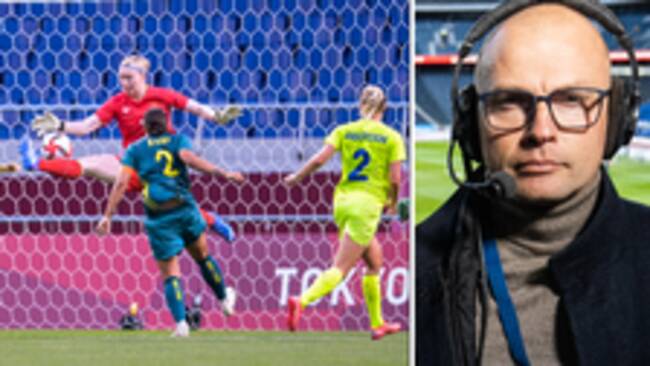 After the discharge against the USA, Sweden was tested against Australia.

The team was bad out in the second half with a 1-2 deficit.

But turned to victory with 4-2.

- It is impressive to succeed in turning in the vulnerable situation.

Sweden was not as good as against the USA, you have to be honest.

Sweden did not have the same energy and aggressiveness in the game, and looked a bit worn out after the discharge against the USA, says Markus Johannesson.

The SVT expert thinks that there are some question marks in the Swedish defensive game after the match against Australia.

- In the back line, there are big question marks individually.

And Magdalena Eriksson has not played a match in a long time, you have to remember that.

And when Hanna Glas changes during the break, there will be a great rotation of new players in the back line.

They have not played together the back line yet in that way, to win the tournament in the end.

A better defensive game will be required, he says.

But it was the Swedish offensive that turned the match around with three straight goals in the second half.

- The offensive is really good, and very effective.

If you want to win a championship, you have to be efficient.

It's about scoring goals on the chances you get.

Then you can be low in the defensive game for periods.

That is a security in the team, says Markus Johannesson.

She has found her role in the national team.

She sneaks in from the right edge, and then it just slams.

She is in good shape.

Self-confidence is at its peak and she is ready for Barcelona, ​​says Markus Johannesson.