China News Agency, Tokyo, July 24th (Reporter Wang Zumin) On the first day of the Tokyo Olympics, the Chinese Army made a good start, not only won the first gold in the tournament, but also temporarily ranked first on the gold medal list with 3 gold medals.   Of the 11 gold medals produced that day, in addition to the Chinese team won three, Italy, Japan, South Korea, Ecuador, Hungary, Iran, Ko 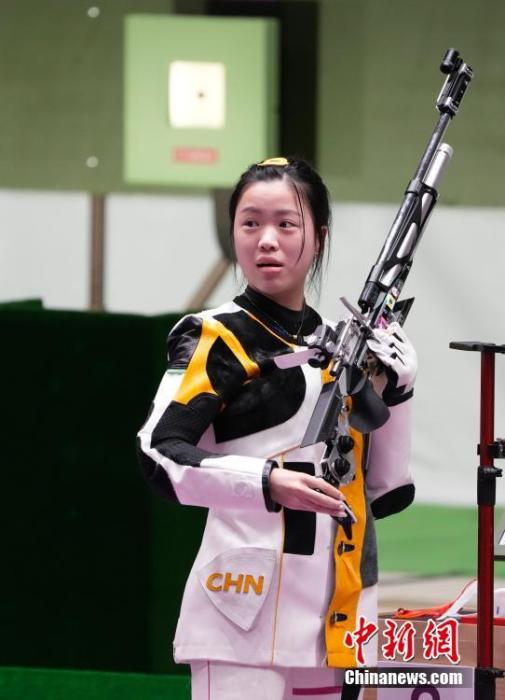 China News Agency, Tokyo, July 24th (Reporter Wang Zumin) On the first day of the Tokyo Olympics, the Chinese Army made a good start, not only won the first gold in the tournament, but also temporarily ranked first on the gold medal list with 3 gold medals.

Of the 11 gold medals produced that day, in addition to the Chinese team won three, Italy, Japan, South Korea, Ecuador, Hungary, Iran, Kosovo, and Thailand each won one.

The much-anticipated first gold suspense was announced on the 24th at the Asaka Shooting Range in Tokyo.

In the women's 10m air rifle finals, the Chinese "post-00" teenager Yang Qian set an Olympic record with 251.8 rings with the last shot, and won the first gold medal for the Chinese delegation in this Olympics.

In the women's 10-meter air rifle final of the Tokyo Olympics held on July 24, Chinese athlete Yang Qian won the championship and won the first gold medal for the Chinese delegation.

This is also the first gold medal born in this Tokyo Olympics.

The picture shows Yang Qian in the arena.

This is the 23rd Olympic gold medal won by the Chinese shooting team and the seventh time it has won the first gold for the Chinese delegation in the past ten Olympic Games.

Another Chinese teenager Wang Luyao stopped the qualifying round.

In the weightlifting field, Xiang sister Hou Zhihui defended the honor of the Chinese women's dream team with absolute strength. In the women's 49 kg competition, she set three Olympic records in snatch, clean and jerk and won the championship.

Before the Rio Olympics, 19-year-old Hou Zhihui was also a favorite to win the championship, but was temporarily replaced 4 days before the start of the competition due to injury, and missed the Olympics.

On the afternoon of July 24, the Tokyo Olympic Games women's 49 kg weightlifting final was held at the Tokyo International Forum Building. The Chinese weightlifter Hou Zhihui lived up to expectations and won the championship with a snatch 94 kg, a clean and jerk 116 kg, and a total score of 210 kg.

At the same time, Hou Zhihui broke the Olympic snatch record and total score record with a total score of 210 kg with 94 kg.

This is also the second gold won by the Chinese team in this Olympics.

Coincidentally, the three gold medal winners represent three different age groups: "Post-00" Yang Qian was first to participate in the Olympics, and the 24-year-old Hou Zhihui was in the same year and passed the previous Olympics; The 29-year-old Sun Yiwen is an "old man" and won individual bronze medals and team silver medals at the Rio Olympics.

In the arena, victory is bound to be defeated. Wu Jingyu, the two-time Olympic gold medalist in Beijing and London, regrets the latter.

In the Taekwondo women's 49 kg 1/4 finals, she lost to the 18-year-old Spanish teenager Igleas and stopped in the quarterfinals.

On the evening of July 24, the women's epee individual competition at the Tokyo Olympics ended the final contest. Chinese player Sun Yiwen defeated Romanian Popescu 11:10 to win the championship.

The picture shows Sun Yiwen in the competition venue.

After the game, the Olympic "four-dynasty veteran" retired, saying that from today, she might "change a role."

Pang Wei, another "four-dynasty veteran" at the shooting arena, also said that this will be his last Olympic Games.

Although he won the bronze medal in the men's 10m air pistol competition, this is obviously not the result that the Beijing Olympic champion expected.

Pang Wei said after the game that he would not appear in the Olympics again, and that he would seek new development in the shooting industry in the future.

The farewell words of the two Olympic heroes made people feel a little regretful when they were paying respect.

After a draw, the Chinese women's football team may also say goodbye to this Olympics.

In the game, Wang Shuang scored four yuan alone, but still failed to help the Chinese team failed to take away the victory.

The picture shows the Chinese women's football team scored in the game.

In the last group match, the Chinese women's football team will face the Dutch team, and only if they win can they have the chance to advance.

As the world runner-up, the Dutch team is the strongest team in this group. In the last round, they beat Zambia by 10:3. If the Chinese team wants to win, there is little hope.

In the battle against Zambia, the only thing that made the Chinese team gratifying was the performance of the famous player Wang Shuang. She scored four yuan in this campaign and became the third player in the history of the Olympic women's football team to stage the "big four" in a single game.

On the same day, the Tokyo Olympic Taekwondo event kicked off at the Tokyo Makuhari International Convention and Exhibition Center.

The first day of the Tokyo Olympic Table Tennis Competition began on the 24th, with 16 pairs of mixed doubles players in the 1/8 finals.

The No. 2 seed, the Japanese combination Mizutani Hayabusa/Ito Mima also defeated their opponents 4:1 to advance to the quarterfinals.

On the same day, the women's three-person basketball match for the Tokyo Olympics was held at the Qinghai City Sports Park in Tokyo.

In a group round-robin match, the Chinese team lost 9:19 to the Russian Olympic team.

Three-person basketball became an official event for the first time at the Tokyo Olympics.

On the 24th, the Chinese three-person basketball men's and women's teams each played two games. After the women's team defeated the Romanian team 21:10, the second game lost to the world's second-ranked Russian Olympic Committee team 9:19.