Two goals in the Olympic premiere against the USA and a substitute goal scorer against Australia. But Stina Blackstenius limped off the match against Australia after a stamping. - You get a little worried and scared, but we have checked and it was just pain, says Blackstenius. 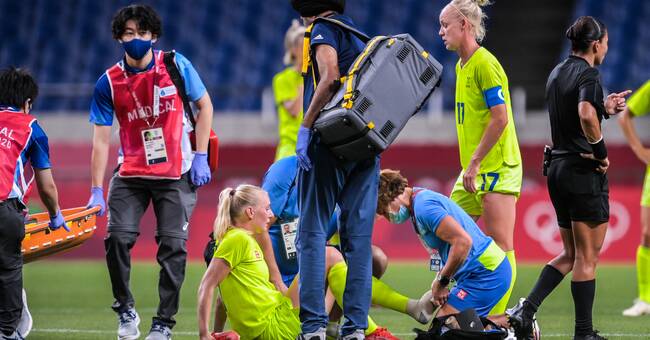 Sweden's women's soccer team is ready for the quarter-finals after following up the premiere victory against the USA by defeating Australia 4-2.

And just like against the USA, Stina Blackstenius played an important role.

The striker accounted for two goals against the USA but had to start the match against Australia on the bench.

In the 59th minute, however, she was replaced and just over 20 minutes later, the strong 25-year-old stayed ahead.

Blackstenius put his forehead on Kosovar Asllani's post and nodded in the final result 4-2.

- It was great fun, of course.

It was a very, very nice kind of post so it was just to try to be on top of it and get a little touch, says Stina Blackstenius.

But the match came to a sad end for Blackstenius.

In the final minutes, she received an ugly stamp over her ankle and writhed in pain on the grass of Saitama Stadium.

After receiving care for a few minutes, she was able to limp out with some help, but did not play more in the match.

Afterwards, she gives a reassuring message.

- Of course, it hurts a little.

But it was just to take the safe before the unsafe and check that everything was calm.

Especially considering that there was so little time left of the match.

She says she can support on her feet, and that the rest of the tournament should not be in danger.

- You get a little worried and scared, but now in retrospect it feels good, they have checked and it was just the stamping so it's just about pain.