Swimmer Yousef Al Matrooshi carried the UAE flag, today, Friday, at the opening ceremony of the 32nd Olympic Games hosted by Tokyo during the period (July 23 - August 8), with the participation of 83,911 athletes competing in 33 sports in 339 competitions in 48 sports facilities. 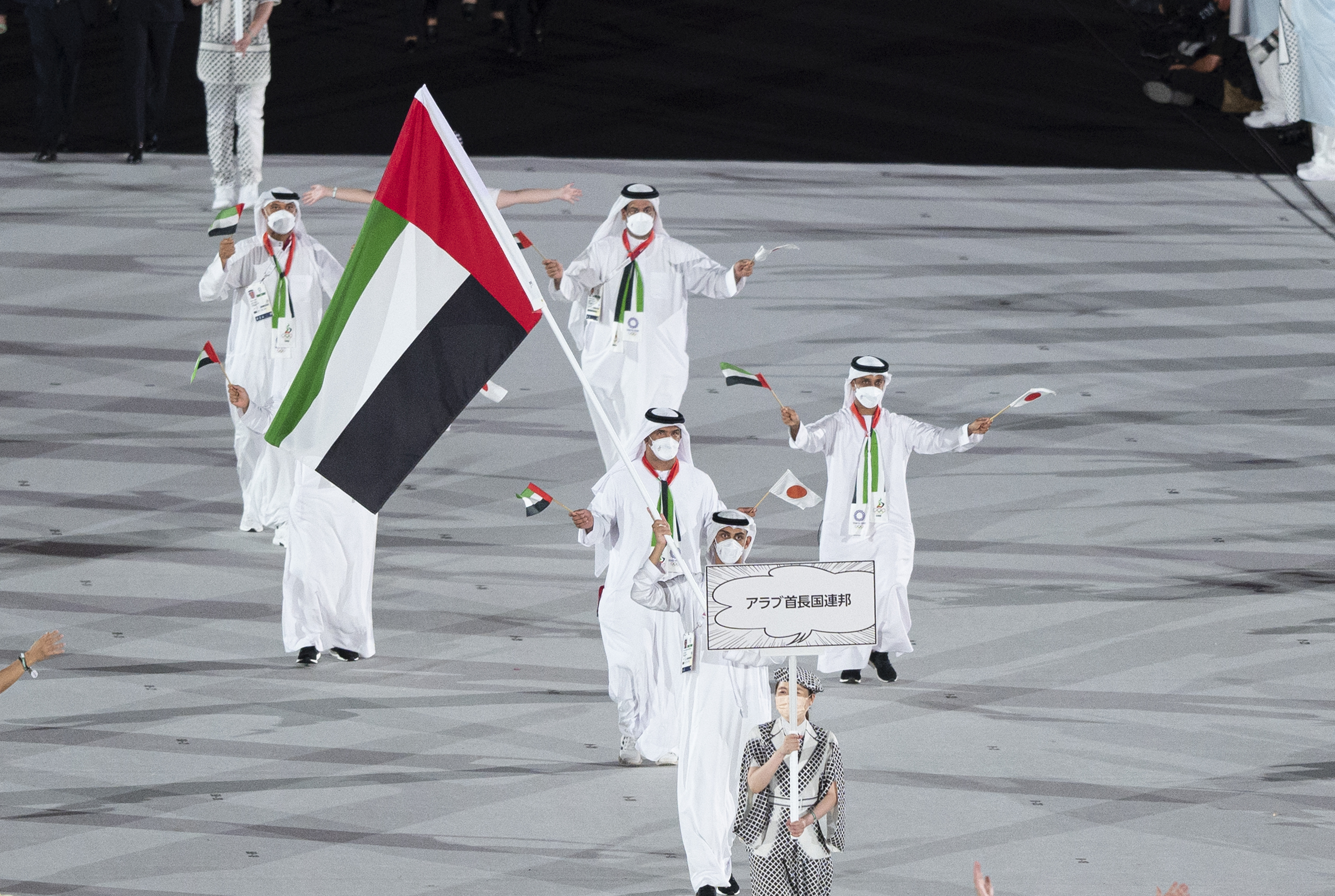 Swimmer Yousef Al Matrooshi carried the UAE flag today, Friday, at the opening ceremony of the 32nd Olympic Games hosted by Tokyo during the period (July 23 - August 8), with the participation of 83,911 athletes competing in 33 sports in 339 competitions in 48 sports facilities, where the ceremony was held on the stadium The Olympic Games without fans in the presence of Emperor Naruhito of Japan, in addition to the heads of 15 countries from around the world, including French President Emmanuel Macron, as well as Thomas Bach, President of the International Olympic Committee.

The ceremony was attended by the UAE Ambassador to Japan Shehab Ahmed Al Fahim, the Assistant Secretary-General for Administrative and Financial Affairs of the National Olympic Committee and the engineer Azza bint Suleiman.

The ceremony witnessed technological reviews that affected all the presented paragraphs that narrated many distinct chapters of the cultural and historical heritage of Japan, with some movements and performances expressing the success of the host country in organizing the games despite the exceptional circumstances the world is going through, where the show teams painted the most beautiful paintings using wood to form A huge model of the Olympic torch decorated the opening stadium. The flag of Japan was carried by a group of Japanese Olympic champions in previous sessions at the beginning of the ceremony.

The ceremony also witnessed a musical show that coincided with a visual one of the most prominent sports competitions whose rhythm was set on the movements of athletes in gymnastics, swimming and athletics, to present a unique aesthetic image.

The organizers of the ceremony did not neglect to involve people of determination in the various paragraphs, as they contributed to the formation of many human forms, before the Bangladeshi Muhammad Yunus, winner of the 2006 Nobel Peace Prize, gave a recorded speech on the occasion of receiving the Laurel Prize established by the International Olympic Committee in 2016 to honor individuals who They make achievements in education and culture through sports, after which the delegations of countries pass the flags in the opening queue in a wonderful scene.

Al Matrooshi: It is a great honor

For his part, Youssef Al Matrooshi, the swimmer of our national team, expressed his overwhelming happiness after being chosen to carry the UAE flag at the opening ceremony of the Olympic Games, an event that millions of people watch from all over the world, stressing that this moment that any athlete awaits with passion and pride, but it will remain immortal in the conscience as one of the Unforgettable moments in the career of all athletes.

Al-Matrooshi extended his sincere thanks, appreciation and gratitude to the National Olympic Committee, headed by His Highness Sheikh Ahmed bin Mohammed bin Rashid Al Maktoum, for giving him this great honor, for which he deserves to make efforts in appreciation of that precious trust when carrying the flag of the nation and a symbol of its pride and loftiness and moving forward in front of thousands of athletes from the delegations of countries The participant who will be present in the ceremony.

The Ambassador of the United Arab Emirates to Japan, Shehab Ahmed Al Fahim, affirmed that being with the nation's athletes in a forum of this size is a matter of pride and honor to represent our national identity and to express our pride and pride in belonging to the UAE, which provides all aspects of support to its children and has never been stingy with them in order to Providing what is worthy of the nation’s name, reputation and status, and translating the support and directives of our wise leadership into tangible practical results through which the efforts made in the honorable journey of representing the nation will be crowned.

Al Fahim pointed out that seeing the UAE flag flutter in the queue for the opening of the largest sports forum in the world inspires a spirit of optimism, challenge and diligence for everyone, whether athletes during their competitions and their performance in various games, or the team of the State Embassy and the accompanying administrative delegation who spend long times with love And pride in serving athletes, providing their necessary needs and ensuring their safety in light of the exceptional circumstances the world is going through.

Al Fahim expressed his hope to see the UAE flag raised again during the Olympic Games on the podiums by achieving one of the colored medals and gifting it to the leadership and people of the UAE, and registering the name of the country in the list of achievements and successes by being in the ranking table of the session, praising the clear interest and continuous follow-up by His Highness Sheikh Ahmed bin Mohammed bin Rashid Al Maktoum, Chairman of the National Olympic Committee during the last period when His Highness directed the formation of joint working teams between the Committee and the UAE Embassy to follow up on all matters and updates received from the Games Organizing Committee and the concerned authorities, especially with regard to the procedures for periodic examination of Covid-19 and the safety and prevention instructions followed since Arrival and departure.

The draw for the 32nd round of judo competition resulted in our national team player Victor Sktov facing Swedish player Tommy Macias in the weight of under 73 kg, where the competition will take place after tomorrow, Monday, while our player in the weight of under 100 kg, Ivan Romanko, will meet his Canadian counterpart Shadi Al-Nahhas in the same round in the 29 of this month.