When China is looking forward to winning the first gold in the Olympics, this neighboring country...

Reporter: Song Fangcan   The first Olympic gold! 1.4 billion people are looking forward to it! Shoot the dream team! Aim for the "good start"! A big prize of 3 million yuan! ...   Sorry, this is not the script of the Chinese Olympic delegation. It is from India, which participated in the 25th Olympic Games in addition to hockey and only won one Olympic gold medal. The picture shows the prize 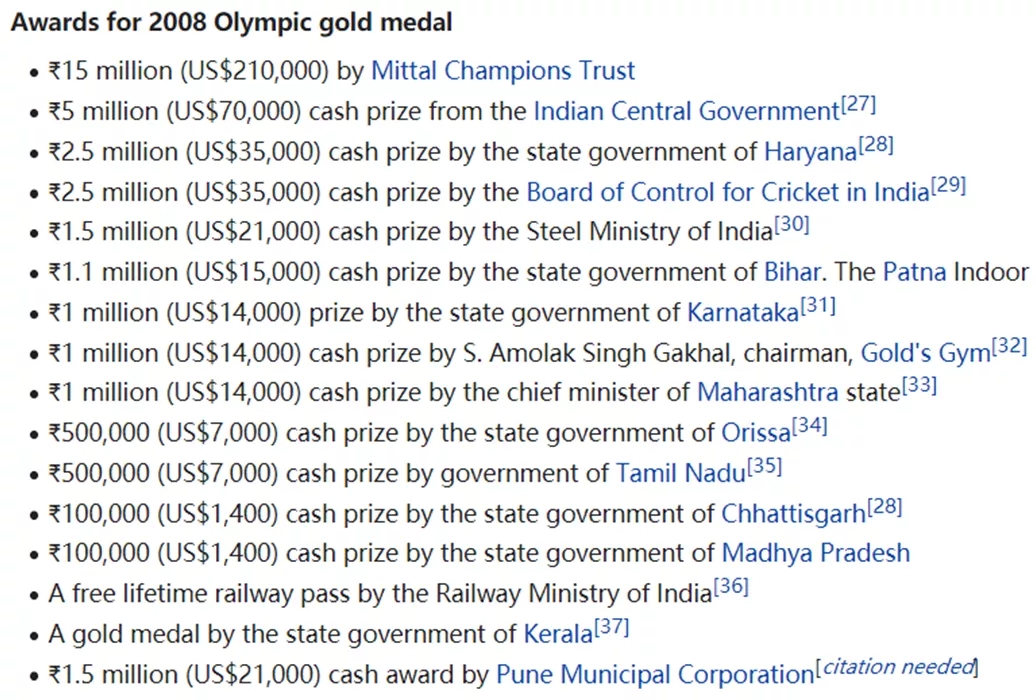 1.4 billion people are looking forward to it!

Aim for the "good start"!

A big prize of 3 million yuan!

Sorry, this is not the script of the Chinese Olympic delegation. It is from India, which participated in the 25th Olympic Games in addition to hockey and only won one Olympic gold medal.

The picture shows the prize money won by Bindra, who won the gold medal for India at the 2008 Beijing Olympics, which is approximately US$500,000.

On foreign social media, searching for the keyword "Olympic shooting" is all news from the Indian media.

The "Hindustan Times" is even more full of long articles. It does not hesitate to report every move of the Indian Olympic shooting team. In the past two months, more than 10 articles have been published.

"This is a focal point that all Indians are paying attention to." An Indian media outlet wrote on its social media account.

Although there is a huge national group of nearly 1.4 billion people, India's performance in the Olympics can be said to be... hard to say.

But speaking to the shame of the country, they have only won 9 gold medals in history, and 8 of them came from a relatively small collective event-hockey!

The only gold medal they won in a non-hockey event was that Bindra won in a shooting competition at the 2008 Beijing Olympics.

Bindra's success also gave the weak Indian sports a shot in the heart.

Shooting has also become a straw for Indians to change their large but not strong international image and enhance their national pride.

Bindra expressed optimism about the Indian shooting team's participation in the Olympic Games.

"For the prevention and control of the epidemic, each contestant must come and go alone, which can make it easier for young Indian shooters to play the Olympic games as usual."

India has sent an unprecedentedly powerful shooting team of 15 people to participate in the Tokyo Olympics. In the opinion of the President of the Indian Shooting Association, Raninde Singh, "Everyone can win a card"!

Two people in the team have just turned 20, and there are a few geniuses who are less than 20 years old.

This time, the Indian shooting "Dream Team" has unprecedented strength.

In mixed team competitions, India, where newcomers are blooming everywhere, is also extremely competitive. "It would be great if the gold medal match were held between the Indian team A and B!" Bindra looked forward to it.

Laninde also vowed: "I believe that they will have outstanding performance!"

India’s Secret: Prospering a Country for One Person

The last shot of Bindra on the Beijing shooting range completely ignited the sports passion of Indians and inspired the unprecedented Olympic dream of Indians.

On the day Bindra won the championship, 65 air rifles were sold in a store in his hometown of Chandigarh.

Many stores have sold out their inventory for many years in the past few days, and many orders have been received.

The company sold 400 air rifles in the first 7 months.

Shooting quickly became popular in India, and the number of people engaged in this sport in India is now close to 10,000, which is 10 times that of China!

As if overnight, the level of the Indian shooting team was advancing by leaps and bounds, sweeping the rankings of the International Shooting Federation.

For the evolution of this Olympic cycle, the Indian media used "terror" to describe it.

Laninde believes that Indian shooters will sweep the medals, a blockbuster.

His confidence stems from the fact that India has topped the FIFA World Cup four times before the outbreak began, and the emergence of Saurabh Chaudhary and Manu Bhaker, etc. Super rookie.

Having won medals in three consecutive Olympic Games, Indian shooting has gradually found its way up.

Although nothing was achieved in Rio, the Indian team has gradually stabilized and improved its level by introducing famous coaches such as Europe.

"The Indian government has always been very effective. As long as it is needed for training, we will provide equipment if we want equipment, and ammunition if we want. The government has taken care of everything," Bahak revealed.

Under the national system, India is ambitious. In order to prevent infection and interference by the local epidemic, the Indian shooting team spared no expense to train in Zagreb in Europe for several months and participated in some international competitions held there.

Elevenil Valarivan is considered the favorite to win the first gold

India has regarded the first gold of this Olympic Games as its bag.

Elevenil Valarivan, regarded by India as the star of this Olympics, is 21 years old this year, the golden age for performance.

She is currently ranked No. 1 in the world and won the runner-up of the 2018 World Championships and the champion of the 2019 World Cup finals.

In recent years, she has maintained a stable high level in the World Series, and even replaced the veteran Mudgil in the first gold battle.

Another Indian contestant, Apvi Chandra, is an experienced veteran. At the age of 28, she has won multiple World Cup matches in the past two years and will form India's "double insurance" with Elavinier. .

"Get the first gold?" Some Indian media commented, "This is definitely not a pre-match foolish dream!"

First Gold China is ready to say "no"

The first gold in the Olympics was basically produced in the shooting event of the women's 10-meter air rifle in previous Olympics.

This has always been a "pressure relief valve" that the Chinese Olympic delegation has to strive for.

Usually, after winning this gold medal, the Chinese delegation will be able to deal with it calmly, and the players can play lightly and play steadily.

A cycle of eight years, it is said that it is time for China to win the championship.

However, in the world rankings, the highest ranking of the Chinese team is Zhao Ruozhu, ranked 14th, and has not yet qualified for the event.

Among the two Olympic gold medalists, Wang Luyao ranked 18th, and Yang Qian, who was highly expected, ranked only 81st.

Yang Qian, a young Chinese athlete, will shoulder the heavy task of competing for the first Olympic gold for the Chinese delegation.

The 21-year-old "post-00" youngster Yang Qian's international rankings are not satisfactory, which may be related to her late rise.

Before the epidemic, she mainly participated in youth competitions.

In the few national team competitions, she has only been to the Asian Championships and individual World Cup competitions.

In the 2019 Rio World Cup, she ranked only 23rd in individual rankings and 2nd in team competitions.

In that World Cup, the Indian players swept 5 golds, 2 silvers and 2 bronzes.

However, what is worth looking forward to is that Yang Qian won all four games in this year's Olympic selection competition for the Chinese shooting team, defeating a large number of famous and veteran players, qualifying for the Tokyo Olympics, and even tying the world record. .

However, even in the face of Indian players younger than herself, she is still in a suppressed state.

In the series of World Cup matches from 2018 to 2019, her personal ranking hovered between 2nd and 22nd.

In the 2019 World Cup finals, she ranked fourth.

Shooting is a sport full of uncertainty and charm, and the competition process is often ups and downs.

In the first Olympic gold battle on the morning of the 24th, I look forward to the two Chinese players who can inherit the fine traditions of the Chinese women's airsoft team, overcome the shortcomings of the lack of experience in the competition, play their own level, and create great results!