From Friday July 23 to August 8, 378 French people will compete in the Tokyo Olympics. France 24 offers a selection of 10 athletes to follow and encourage during this sporting fortnight. 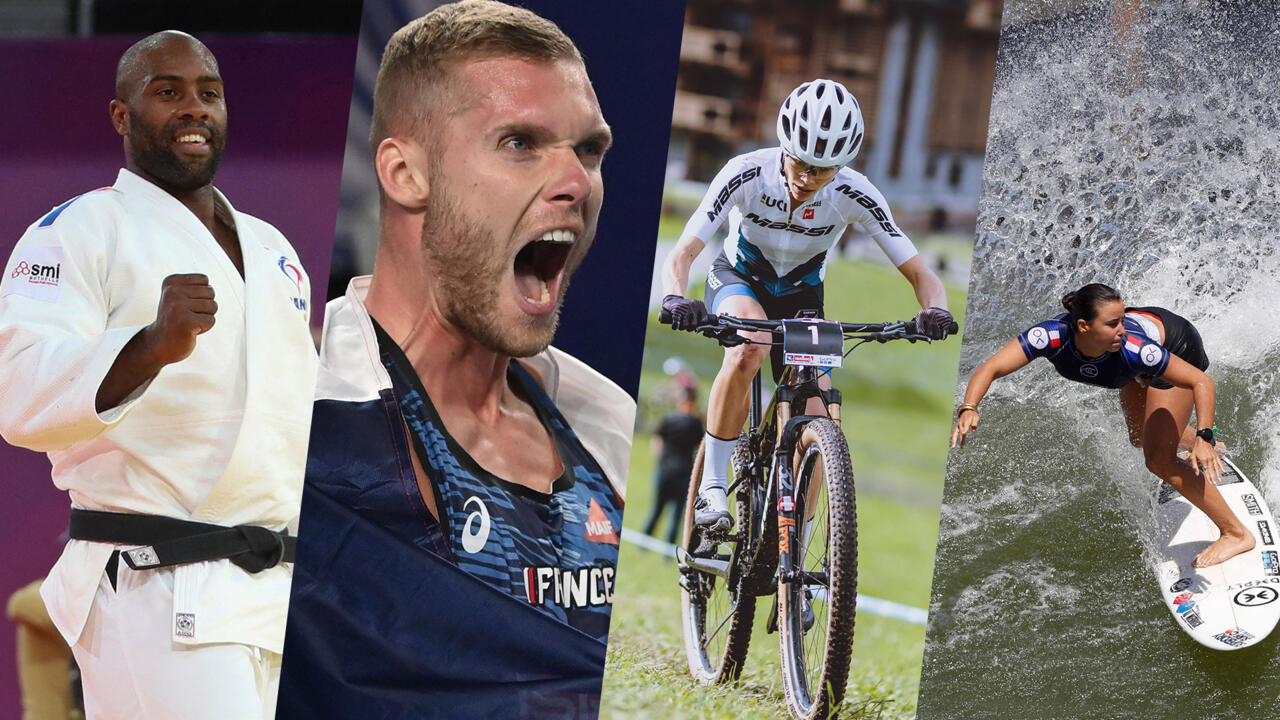 After a year of postponement due to the global Covid-19 pandemic, it's time for sport and the Tokyo Olympics for the 378 qualified French athletes.

Michel Vion, head of mission of the French delegation to the Olympic Games, had set the target of around forty medals for France.

France 24 has selected 10 athletes, five men and five women, who represent as much hope to hear the Marseillaise resound on the Japanese podiums.

He will only have one chance to become an Olympic karate medalist and Steven Da Costa intends to seize it.

Indeed, the martial art, added to the Olympic program of Tokyo, has not been renewed for 2024. The 24-year-old karateka, who has already won all the existing titles in his discipline, intends to add this one .

>> To read also: For the karateka Steven Da Costa, "the health context takes away the joy of the Olympics"

If the Olympics had taken place in 2020, Loana Lecomte would undoubtedly have watched them on television.

A year later, however, it is as a big favorite that the Haut-Savoyarde arrives in Japan.

Outclassed among the seniors while her age would allow her to always evolve among the hopes, she won everything in 2021. Four World Cup races contested, four victories with each time all the laps passed in the lead.

She is also champion of France since July 10 and world number 1.

She can only aim for gold… Unless her compatriot Pauline Ferrand-Prevot prevents her from doing so.

She made the Olympics the big goal of her season.

Anouck Jaubert, 27, is one of the four athletes in the French contingent.

She relishes this qualification that she has been aiming for for years and hopes to shine.

The young woman is a specialist in speed climbing, one of the three disciplines of the Olympic combined.

She hopes to get a head start on her favorite sleeve and then hang on in the bouldering and difficulty events to win a medal.

His compatriot Julia Chanourdie is also to watch.

>> Anouck Jaubert: "It's a big step for climbing"

The eventual final will take place on August 6 at the same time.

Before the entry into force of the IOC “rule 40” which governs the communication of athletes, I would like to thank each of my partners for their unwavering support and guidance in this incredible quest , THANKS pic.twitter.com/OzEDAvNjZZ

In the land of judo, in the legendary hall of the Nippon Budokan, Teddy Riner will try to offer himself a part of legend with an extremely rare third Olympic title at the Tokyo Games.

Even the latter considers that the 32-year-old Frenchman is "the king of judo".

In women, it will be necessary to watch the flag bearer Clarisse Agbegnenou, five-time world champion in -63 kg.

Beaten in the final in 2016 by Slovenian Tina Trstenjak, as in the 2015 worlds, Agbegnenou is mulling over his defeat since Rio.

Teddy Riner will enter the competition on Friday, July 30 at 4 a.m. KST.

Clarisse Agbegnenou will be followed on Tuesday July 27 from 5 a.m. (Paris time).

At 23, skate prodigy Aurélien Giraud will represent France in the "street" discipline at the first Olympic Games in the history of his sport.

His goal: to win the gold medal and thus contribute to the influence of skateboarding, in the hope of convincing the skeptics who believe that the discipline has nothing to do with the Olympic Games.

>> To read also: From the skateparks of Lyon to the Olympic Games in Tokyo, the prodigy Aurélien Giraud dreams of gold

🇫🇷 You will not see anything more beautiful today 💥

At 41, the Lyonnaise will play for the sixth time in her career in the Olympic Games.

Two years after her maternity leave, she gleaned her 20th discus throwing title in June.

Vice-champion at the Rio Games, this year she wants to be on the top step of the podium.

Samir Aït-Saïd, the rings specialist, is the first French gymnast to be named flag bearer.

A great reward for those who have a complicated history with the Olympics.

Then, in 2016, in Rio, he suffered a very violent double-fracture during qualifying.

However, he is not the type to give up or mull over these past bad luck, he will go for gold in Tokyo.

French 3-on-3 basketball, a new discipline for the Olympic Games, will be well represented in Tokyo with Laëtitia Guapo, world number one.

With her teammate Migna Touré, her runner-up in the world ranking, France has the means to aim high.

The French team's first match is scheduled for 2:25 p.m. PST on July 24 against Italy.

World number 2 and winner of the last World Tour competition in June, Reunionese Johanne Defay, 27, intends to shine at the Olympic Games, which will be the first for the discipline.

If the favorite will be American and is called Carissa Moore, the Frenchwoman has the means to block her path to the gold medal.

In the outstanding record that Kevin Mayer is building for himself, he is missing an Olympic gold medal and he intends to win it.

Silver medalist in Rio, he is now one of the favorites of the competition.

And for good reason, he won the 2017 world championships and has held the world record in the discipline since 2018.