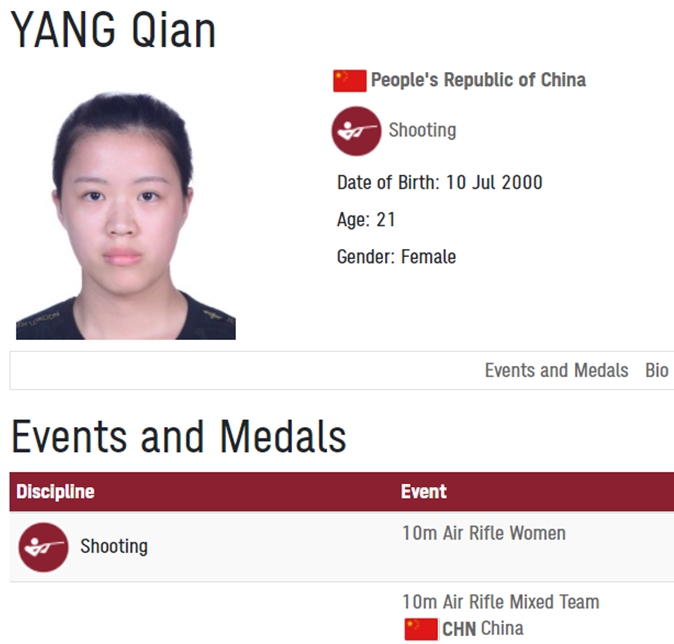 At 8:30 on the morning of July 24, the first gold battle of the 2020 Tokyo Olympic Games will start at the Asaka Shooting Range.

In this women's 10m air rifle competition, Yang Qian and Wang Luyao of the Chinese team will jointly challenge sharpshooters from India and other countries and regions.

Chinese players: vigorous but not famous

The Chinese Olympic delegation has always attached great importance to the first gold in the Olympics.

The women's 10-meter air rifle is a traditional gold medal in China. Du Li and Yi Siling won the championship in 2004 and 2012 respectively.

However, among the two Chinese contestants this year, Wang Luyao ranked 18th in the world and Yang Qian ranked only 81st.

Yang Qian, a young Chinese athlete, will shoulder the heavy task of competing for the first Olympic gold for the Chinese delegation.

The 21-year-old "post-00" teenager Yang Qian is not ranked high in the international rankings, which is related to her late rise. She ranked only 23rd in the 2019 Rio World Cup.

However, Yang Qian won the first place in all four games in this year's Olympic selection competition for the Chinese shooting team and easily qualified for the Olympics.

However, in the series of World Cup matches from 2018 to 2019, her personal ranking hovered between 2nd and 22nd.

In the 2019 World Cup finals, she ranked fourth.

Due to the needs of epidemic prevention and control, the Chinese shooting team has absent from all international competitions in the last two years, which also makes young players lack the baptism of the competition.

To win, they must give full play to their level.

Head-to-head with the Chinese team

For the first gold in this Olympic Games, the biggest opponent of the Chinese team is the Indian team.

At the 2008 Beijing Olympics, Bindra won the air rifle event, which aroused an unprecedented enthusiasm for shooting in India. A large number of young people participated in the sport, and their level has also improved by leaps and bounds.

India sent an unprecedentedly strong lineup of 15 people this time.

Among them, 8 players ranked first or second in the world and maintained 2 world records in the finals.

In the opinion of Raninde Singh, president of the Indian Shooting Association, "Everyone can win a card!"

Elevenil Valarivan is considered the favorite to win the first gold

Elavir Valariwan, who is regarded as hope by India, is 21 years old this year, the golden age for performance.

She is currently ranked first in the world and has won the runner-up of the World Championships and the World Cup finals.

Another Indian player, Apvi Chandra, has rich experience. At the age of 28, she has won multiple World Cup matches in the past two years and will form a "double insurance" with Elavinier for India's first gold.

"Get the first gold?" Some Indian media commented, "This is definitely not a dream!"

In addition, Lin Yingxin of the Chinese Taipei team may also win the medal. She is the 2018 World Cup champion in Germany and runner-up in the 2019 World Cup finals. She is currently ranked 4th in the world.

She has maintained a good condition recently and possesses certain strength.