How much suspense is a pool of clear water? 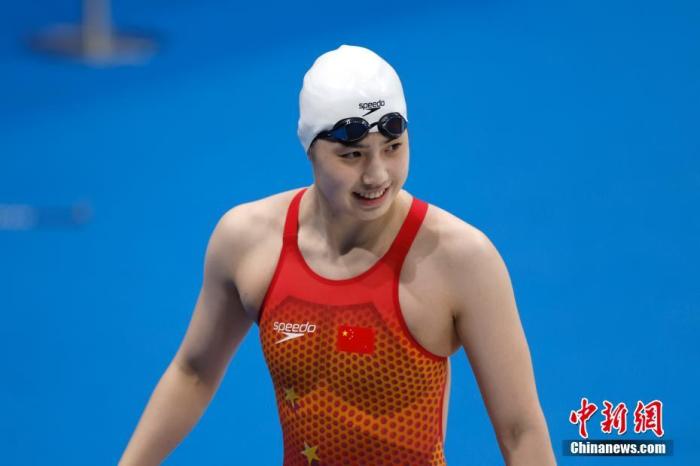 (Tokyo Olympics) How much suspense is a pool of clear water?

China News Service, Tokyo, July 22, title: How much suspense is a pool of clear water?

The Tokyo Aquatics Center, newly built for the current Tokyo Olympics, will be used to host Olympic swimming, diving and synchronized swimming competitions.

As the whistle of the game gets closer, how much suspense is there in a pool of clear water?

In this competition, the swimming event will produce 35 gold medals, and the Chinese swimming team, which has just gone through the transition between the old and the new, will "make one gold at five points."

The picture shows Chinese player Zhang Yufei preparing for training on the sidelines.

She is also the main force in the men's and women's 4×100-meter medley relay, and set a new world record with Xu Jiayu, Yan Zibei and Yang Junxuan in the national championship held last year.

After finishing his adaptability training on the 22nd, Zhang Yufei said when interviewed by reporters from China News Service and other media that he felt "quite good to travel."

The "Queen of Butterfly" believes that compared to the "uneasy" when participating in the last Olympic Games, his mentality has now stabilized: "I am still waiting for the outbreak on the day of the competition."

Zhang Yufei also printed out the old photos of the Rio competition and made them into ornaments to hang on the backpack.

In the photo, she combed her hair into a double bun, which looked like Nezha, an ancient Chinese mythical figure.

She said that this time we will "successfully "make trouble in the sea"".

Backstroke world champion Xu Jiayu is the third time for the Olympic Games.

In Rio, he won the runner-up in the men's 100m backstroke with a difference of 0.34 seconds.

""The swimming pool is very empty, and the visual sense of backstroke is very good. I feel very comfortable.

From "first gold" to "contract"?

Since participating in the Los Angeles Olympics in 1984, the Chinese diving team has won 40 Olympic gold medals, but it has never achieved the feat of winning gold medals in the Olympics.

Zhou Jihong, who won the first Olympic gold medal in diving for China at the Los Angeles Olympics, is now the leader of the Chinese diving team.

A few days ago, she led the team out of Tokyo's Narita Airport. Faced with the question of "Can you win 8 gold this time" raised by the media, she said that the team will do its best to this end.

In the past few days, when it was the turn of the Chinese diving team to train in the stadium, Zhou Jihong was also on the spot to supervise the battle, and occasionally direct the players to improve their movements with the coach.

For athletes, they need to adapt to venues, lights, diving platforms, etc. as soon as possible.

Yang Jian, the champion of the Men's Platform Jumping World Championship, said that he should try his best to maintain a calm mind, "just treat it as an ordinary game."

Wang Han, who will be partnering with Shi Tingmao to hit the first diving gold medal of this tournament on the 25th, said, "I thought I would be very excited when I came in (the stadium), but suddenly found that it was really okay."

Who will take the lead in the US, Australia, and Japan?

Coming to Tokyo, the two teams sent 49 and 35 people respectively, and there is bound to be a "head-to-head" one after another.

Ledecki is in the game.

Among them, Leidecki is a representative of the United States swimming team. Both the 800-meter and 1500-meter freestyles ranked first in the world this year.

But in the 200m and 400m freestyle, the Australian team's Titums is even better.

Men's Drexel, who had won 7 and 6 golds in the 2017 and 2019 World Championships respectively, is expected to become the "multi-gold king" in this Olympics.

Kosuke Hagi, the gold medalist in the men's 400-meter medley at the Rio Olympics, and his other "like enemy and friend", Taiya Seto, will join forces for the gold medal.

The female player Chijiang Rikako, who has overcome leukemia and returned to the competition, plans to participate in the relay competition. She told the media that she will do her best to create a competition that "can make the audience in front of the TV feel the warm atmosphere".

What is the performance of the "new role"?

According to information from various parties, there will also be a number of retired swimmers/diving names who will appear at the Tokyo Aquatic Center with new identities.

China's "diving queen" Guo Jingjing will serve as the referee of the diving event of the Tokyo Olympics.

It is reported that Guo Jingjing, who retired from the game and returned to his family as early as 2011, considered whether to be a referee for a long time. "I think about it later, when the child is older, I have to work, and finally decided to participate."

In comparison, "Olympic Hardware King" Chen Ruolin has more experience in refereeing. After retiring in October 2016, she started diving refereeing career and entered the FINA Diving Technical Committee in 2017.

"Flying Fish" Phelps, who had won 23 Olympic gold medals in his career, "fighted" Tokyo again, but the "match field" changed from a pool of clear water to a screen. He will participate in Olympic coverage as a reporter and swimming commentator. There are comments that people look forward to benefiting from the perspective of the Olympic athlete who has won the most medals. (Finish)