"A match does not win a championship"

A premiere victory that resonated in the football world. But a few hours later, Sweden has already put the 3-0 crush against the USA behind them. - This is the last match we will win for it to mean anything, says midfielder Filippa Angeldahl. 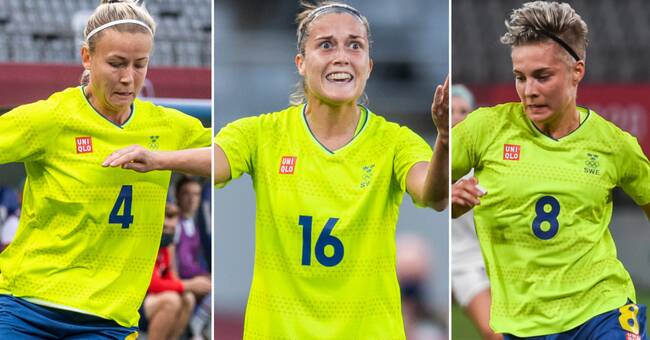 The football ladies' bus trip home to the Olympic Village from Tokyo Stadium was probably one of the more pleasant ones.

After 3-0 in the premiere against the USA itself - which has previously conceded a total of two goals in the last 22 international matches - the Swedish players gave themselves the right to soak up the sweetness of victory.

But no more than that.

- It was a lot of joy and we enjoyed what we could.

But we gave ourselves last night to enjoy and have fun and be proud of what we have achieved.

So that we can already start focusing on Australia today, says right-back Hanna Glas.

- It was a good atmosphere of course, we enjoyed winning.

But today is a new day and tonight we get a tour of Australia.

Then you just have to forget about this match, says striker Lina Hurtig.

It sounds the same no matter who you talk to.

Midfielder Filippa Angeldahl, 24, could hardly have wished for a cooler Olympic debut.

But after a strong effort against the world's best national team, she still keeps the hubris at arm's length.

- It is clear that I value the match highly.

At the same time, I do not want to place too much emphasis on it, because in the end it will not matter, but it is the matches that come that are important, says Angeldahl.

- None of us girls are happy.

We did a good job yesterday, but it is not enough where we really want.

We do not want to stay in anything but are already aiming for the next match.

Lina Hurtig was substituted in the second half and was the one who punctured the Olympic premiere when she nodded in 3-0.

The Juventus star is already thinking about the final group games, against Australia on Saturday and against New Zealand next Tuesday.

- We are of course very satisfied with the results and performance.

We have two important matches left in the group and then it really starts, says Hurtig.

Probably the players still felt that Sweden's victory caused some uproar in the football world.

And that the blue-yellow national team by many is now raised as favorites for the Olympic gold.

- It's not so strange when you beat the reigning world champions 3-0, and the way we do it.

We know that we are good and with such results also come high expectations.

But we try to focus on what we do well and know that a match does not win a championship, says Hanna Glas.

Gold stamps can be put on this team by others.

They themselves do not want to run away further than to the next opponent.

- All the girls here are very loyal and have their feet on the ground.

Everyone looks beyond this.

This is the last match we will win because it will mean something, says Filippa Angeldahl.