Dream start for Sweden - beat the USA in the Olympic premiere

The USA had not lost in 44 matches, then Sweden went out and played total football in the Olympic premiere. It ended up being 3-0 after, among other things, two goals by Stina Blackstenius. - Sweden should have won with a couple more balls, says SVT's expert Markus Johannesson. 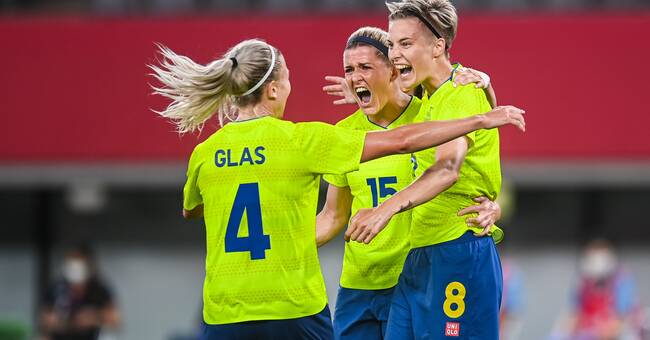 The most difficult possible opposition when the Swedish national football team started the Olympics against the USA?

In advance perhaps, when the world champions USA had not lost in 44 matches, but it was Sweden who started best in front of the empty stands at Tokyo Stadium.

Sweden, who missed Chelsea defender Magdalena Eriksson with feelings in her calf, created chance after chance in the match introduction.

A lot went through the right wing where Sofia Jakobsson got a lot of space for her creativity.

With 25 minutes played, Sofia Jakobsson nearly put the visitors another one up as he broke through in the middle and fired from just outside the box, but his shot passed just over the bar.

Stina Blackstenius kept her mark away and was able to nod in 1-0.

The United States looked shocked, did not find the right position or press game.

After half an hour, however, the Americans managed to establish a game in Sweden's half of the field.

This did not lead to more than a few half-chances, which the Swedish defense could avert.

Goal on the ninth corner

In the 45th minute, the USA created its best chance so far when Rose Lavelle hit the post, but the first half ended 1-0 after a dream game by Sweden, who should have scored more goals on their chances.

Sweden continued to create chances in the second half.

On Sweden's ninth (!) Corner in the 55th minute, Amanda Ilestedt came up nicely and nodded the ball in the post, the return ended up right in front of Stina Blackstenius who smashed up 2-0 in the net.

After 63 minutes, USA's Dahlkemper had to be carried off on a stretcher in agony.

USA looked pale, but in the 70th minute they got an open goal, but dotted the post.

"The worst US I've seen"

With 72 minutes played, Jakobsson came in from the right and could have had the tying goal, but the defenders successfully repelled the attack by Lina Hurtig.

After that, Sweden could only play the match.

The USA came no closer than Hedvig Lindahl had to make a sweaty save in stoppage time.

- It is a completely unlikely opening match for Sweden.

They face the world setter and have big problems with the midfield set-up before the match, but come out with security and obviousness and drive across the USA, says SVT's expert Markus Johannesson.

- Sweden's press game impresses me, at the same time as the USA makes a really bad effort.

It's the worst US I've seen.

Sweden should have won with a couple more balls, Johannesson continues.