Opponent with Russian roots and an Asian title at stake: Gassiev will fight Wallisch for the WBA belt

On July 22, Murat Gassiev will play the next match at the Dynamo volleyball arena in Moscow. The Russian will fight with the German boxer with Russian roots Michael Wallisch, who replaced another athlete from Germany Ercan Teper. The WBA Asia title is at stake. What surrounds Gassiev's second heavyweight fight - in the RT material. 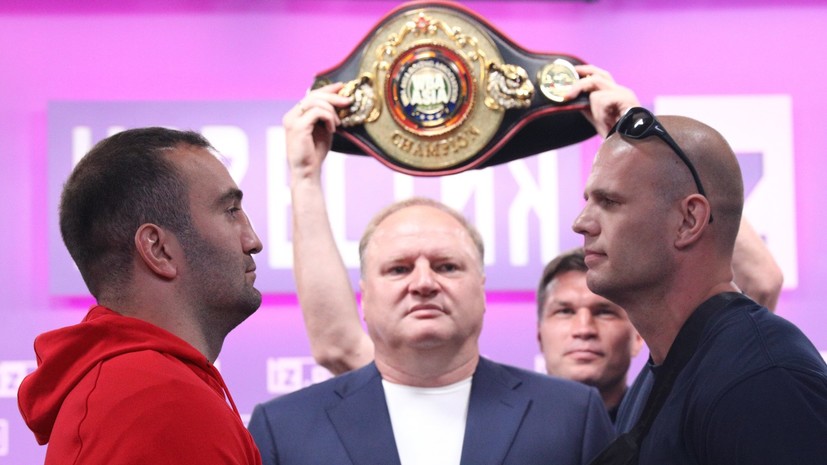 On Thursday evening, Murat Gassiev will try to strengthen his position in the heavy division. The Russian boxer will hold his second fight in this weight category, in which he will meet with the German boxer Michael Wallisch. The date of the bout was not chosen by chance. International Boxing Day is celebrated on July 22, and the next performance of the former world champion is timed to coincide with this event. The bronze medalist of the London Olympic Games Mikhail Aloyan and the undefeated North American Boxing Association (NABA) belt holder in featherweight Andranik Grigoryan will also perform at the tournament in Moscow.

In recent years, Gassiev's career has suffered several times due to numerous cancellations of fights and refusals to perform from rivals. In the period from July 2019 to October 2020, for various reasons, his battles with Joey Daweiko, Jerry Forrest and Kevin Johnson did not take place. His duel with Nuri Seferi was not without problems. So, Murat was supposed to box with his younger brother Sefer, but an outbreak of coronavirus occurred in the Albanian camp, because of which a replacement had to be carried out.

This time, everything was also not without difficulties. Initially, the experienced 39-year-old Ercan Teper, a fairly average boxer, had long passed his peak, was supposed to become Gassiev's opponent. During his long career, the German had 24 fights - he won 21 of them, and lost ahead of schedule only once. Nevertheless, he never became a world champion, although he managed to celebrate victories over several famous athletes. So, at different times he took over the French Joan Duop and the British David Price, but he could not rise above a certain level.

However, more than two weeks before the boxing day celebrations, it turned out that Teper would not be able to perform in Moscow. Due to the restrictions caused by the coronavirus pandemic, the athlete had certain problems with documents that prevented him from arriving in Russia, the organizers had to quickly look for a replacement. It is noteworthy that it was also found in Germany. Erkan's place in the main match of the evening was taken by Michael Wallisch.

If you look exclusively at the track record, then the 35-year-old German is inferior to his compatriot. During his career, Wallisch has never defeated elite opponents, and even has four knockout defeats in the liability at once. True, he was inferior, albeit not so famous yet, but rather promising athletes, most of whom are in the top 15 according to the versions of various organizations. So, Efe Ajagba and Tony Yoka are in eighth and tenth places in the WBC rankings, respectively, and Joe Joyce is in fifth place. In the WBO table of ranks, the Englishman is in second place, behind only Alexander Usik.

These circumstances explain why Gassiev is considered the clear favorite of the confrontation. Many experts and colleagues of the Russian are sure of his triumph, and bookmakers share the same opinion. Thus, the coefficient for Murat's victory is 1.01, while the coefficient for Wallisha's success is 16.00. In this regard, the upcoming battle recalled the duel between Arthur Beterbiev and the German Adam Dines, which took place in March. Then no one doubted the superiority of the domestic world champion in light heavyweight, but the battle was not the easiest one.

The fights with the participation of Gassiev and Beterbiev were combined by several other factors.

Firstly, the well-known promoter Vladimir Khryunov was the organizer in both cases.

Secondly, the rivals not only represented Germany, but also had Russian roots.

And if Daines was born in the village of Semyonovka, Omsk region, after which he left the country with his parents, then Wallisch's fate was a little different.

"I feel right at home.

My mother was born in Moscow.

I am glad to be in Russia ... My parents moved to Germany before my birth.

Therefore, I was born already in Germany.

I was forced to grow up in a German family due to family circumstances, "Wallisch quotes Sport-Express.

During the press conference, the fighter spoke highly of the ex-world champion in the first heavy weight - both about the athlete and the person.

He also admitted that he is in his best shape.

During his career, Gassiev met with only one boxer of this size - the Ukrainian Igor Pilipenko.

“What is a good opponent for?

He has a lot of experience.

The fight will show everything.

My task is to listen to the seconds.

I will do everything for the sake of victory ... Another advantage of Wallisch is that his mother was born in Russia.

This means that there is a part of the Russian character in him, ”Gassiev said.

In March, Daines had already demonstrated his inflexibility, having fought on equal terms with Beterbiev for most of the fight.

At certain points, the German even interrupted the Russian, but in the end he still ended up on the floor.

In turn, Gassiev noted that he would also try to complete the battle ahead of schedule, but he was ready to work out all the prescribed 12 rounds.

“I never thought about how the fight would end.

If there is an opportunity to complete it ahead of schedule, then, of course, I will use it.

If the whole distance lasts, I will show you a beautiful boxing, ”Gassiev said.

Already in this fight, the Russian can win his first heavyweight belt - the WBO Asia regional title.

However, the athlete himself is hardly worried about such awards, and meetings with strong rivals arouse much greater interest in him.

By the way, Gassiev once again made it clear that he would like to have a revenge with Alexander Usik.

“On July 22, I will have a fight, and Usyk will face Joshua.

I hope that I will also have the opportunity to fight this kind of opposition.

While we have different paths.

I think about my fights, and he about his.

If this fight ever takes place, then I will not give it up, ”the Russian assured.

Taking into account the retirement of Alexander Povetkin from the sport, Gassiev remained one of the few Russians able to adequately represent Russia in the heavyweight division.

At the same time, Murat himself said that it is too early to compare him with the former holder of the belt of the WBA regular champion.

“I try not to think about it.

This is already a matter for the spectators who are watching me, but I think that I am still far from Sasha.

Firstly, he is an Olympic champion and he boxed with very good opponents.

I cannot compare myself with him.

But if I have to, I will try to reach its level, ”concluded Gassiev.