Recognition as the fighter of the year, meeting with a fan and refusing to fight with Saint-Pierre: what does Nurmagomedov do after leaving the sport

Khabib Nurmagomedov received the ESPY Best MMA Fighter of 2021 award and fulfilled the wish of an elderly fan who traveled from California to Nevada for him. Also, the Russian athlete was skeptical about the possible return to the cage of Conor McGregor, admitted that he had recently abandoned the fight with Georges Saint-Pierre and explained why he considered himself one of the greatest representatives of mixed martial arts. How Nurmagomedov spends his time after the end of his career - in the RT material. 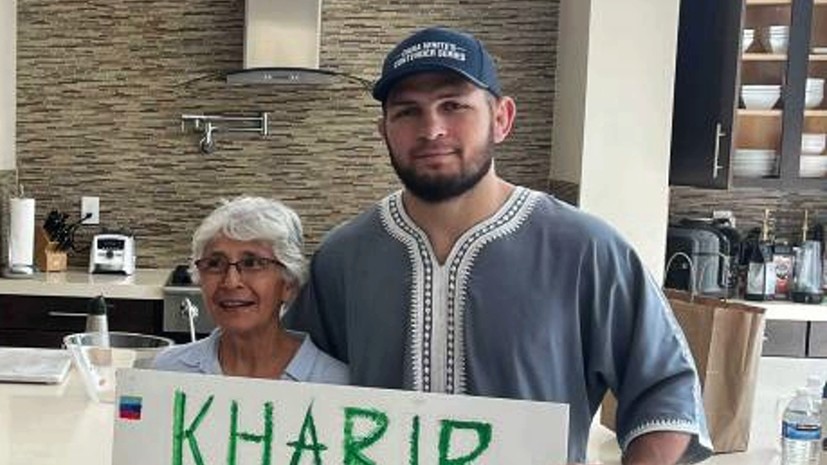 Khabib Nurmagomedov remains in the spotlight of the MMA community even more than six months after the decision to end his career as an athlete. Currently, the ex-UFC champion helps Islam Makhachev prepare for the fight with Thiago Moises at the UFC Vegas 31 tournament, and along the way manages to answer journalists' questions, accept well-deserved awards and personally communicate with fans. So, the day before, the Russian fulfilled the fan's wish in honor of her birthday and not only held a meeting with her, but was also photographed for memory.

As Nelly Gonzalez herself admitted, on her 66th birthday she wanted to receive a photo with Nurmagomedov as a gift.

Hoping to meet her idol, she made her way from California to Nevada, after which she began to wait for him at the UFC headquarters in Las Vegas.

And in order to attract attention, she unfolded a poster calling on Khabib to stop and take a joint picture with her.

As a result, her plan worked.

The president of the Absolute Fighting Championship, Dana White, invited the fan to come inside, and subsequently introduced her to the Russian athlete.

As a result, Nurmagomedov was photographed with his fan and talked to her for some time.

Gonzalez herself was delighted with the meeting with one of her favorite fighters and admitted that this event was of great importance to her, and the impressions "cannot be described in words."

In the last week, not only an elderly fan from California, but also the founders of the prestigious ESPY award, expressed their respect for Nurmagomedov.

In July, an event is traditionally held at which the best athletes of the year in various categories are determined, and this time the former UFC champion was among them.

At the same time, in 2020, Nurmagomedov had only one fight, after which he announced his retirement.

In October, he won an early victory over Justin Gaethje at UFC 254 in Abu Dhabi and defended his lightweight title for the third time.

At the same time, Ngannu and Namayunas won the belts in the heavy and minimum weights, respectively, and Nunez defended the title in featherweight twice.

Thus, Nurmagomedov became the second winner of this award in history.

In 2020, the event was not held in full due to the coronavirus, and in 2019, its partner at the American Kickboxing Academy (AKA) Daniel Cormier received the prize.

Until then, ESPY had presented one overall award for boxing and mixed martial artists ("Fighter of the Year"), and Floyd Mayweather Jr.was the most common award (six times).

In parallel with this, Nurmagomedov manages to help his partners in the Eagles MMA team in preparation.

He is currently in Las Vegas, where on the night of July 18 he will be a second to Islam Makhachev.

So, a few days before the tournament, he published photos from the training of his teammate and shared his expectations from the upcoming show.

“Everything goes on as usual.

This week is very important for our team.

Makhachev will have to prove and defend a lot on Saturday night, and we will be there, ”wrote Nurmagomedov on Instagram.

At the same time, Nurmagomedov once again made it clear that he had no doubts about Makhachev's abilities.

In an interview with ESPN, he stated that Islam is strong in all aspects and surpasses all possible rivals in the 70 kg division.

According to him, the Russian is able to win an early victory over the current first number in the rating - Dustin Poirier, as well as deal with the champion title holder - Charles Oliveira.

Not surprisingly, Nurmagomedov was also asked about the main fight of the UFC 264 tournament, in which Dustin Poirier defeated Conor McGregor for the second time in a row.

The fight was stopped at the end of the first round, as the ex-champion in two weight categories broke his leg and could not continue to fight.

After the fight, the Irishman called the victory illegal, with which the Russian athlete did not agree.

Nurmagomedov supported the decision of the judges who gave the first round to Dustin with a score of 10: 8, and also said that if he and Conor had 100 head-to-head fights, the American would have won each of them.

As for the possible return of McGregor to the octagon, he was also skeptical about this.

Among his possible opponents, he named all the same Poirier and Nate Diaz, but expressed the opinion that the Irishman would yield to each of them.

In turn, Nurmagomedov once again assured that he was not going to resume his career.

The fighter expressed confidence that they will talk about his possible return to the sport over the next seven to eight years, and White himself will try to organize his 30th jubilee fight for a long time.

At the same time, he made it clear that such persuasion would not work on him and told him which proposal from the UFC he had recently refused.

“Dana sent me a message saying, 'Hey, Georges Saint-Pierre wants to fight you.'

It seems to me that Georges too.

Let the guy remain a legend.

He is forty, and I do not understand why he needs to enter the ring again.

And, in my opinion, he has enough money.

Once and for all, "admitted Nurmagomedov.

After the victory over Gatji, Nurmagomedov's place in history became one of the hottest topics for discussion.

Some called him the greatest MMA fighter, while others noted that his decision to retire at the height of his career did not put him on a par with the legends of mixed martial arts.

At the same time, Khabib himself believes that he is worthy to be in the pantheon of the greatest.

“I am one of the greatest.

I am on a par with Fedor (Emelianenko. -

I am on the same level with them, ”Nurmagomedov said.