Five sets of tennis medals will be awarded at the Tokyo Summer Games. Novak Djokovic may win the first victory and come close to the design of the Golden Slam, but Russian tennis players, who have not had awards for more than 20 years, will try to prevent him. Naomi Osaka missed Wimbledon to prepare for the home tournament, where her main rival will be Australian Ashley Barty. Elena Vesnina will defend the title of champion in the women's doubles, but not with the partner with whom she reached the final of the grass major. About the main tennis intrigues of the Olympics - in the material RT. 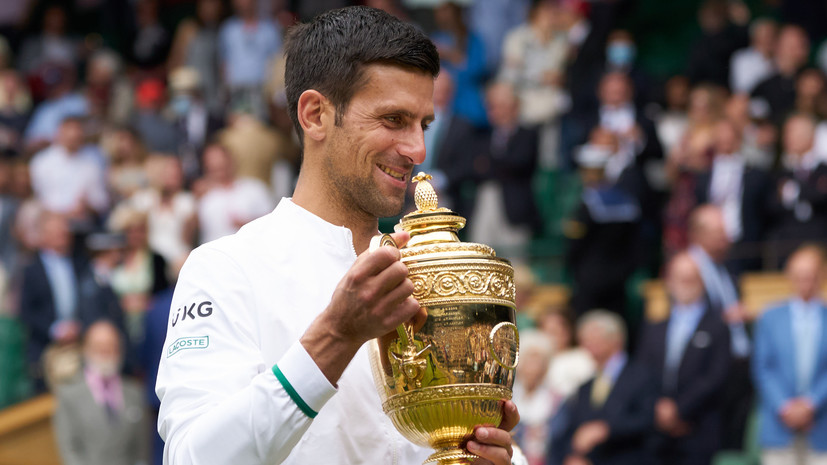 Without Nadal and Federer, but with four Russians

The Olympic Games can be called the most specific competition for professional tennis players.

By definition, they do not win prize money, but only medals, which can be called the rarest award in this sport.

Ranking points have not been distributed since 2016, which could have served as a decent motivation a month before the US Open.

Finally, athletes from different countries who are accustomed to performing in pairs are forced to unite with their compatriots.

The coronavirus pandemic also leaves its mark this season.

Largely because of her, many favorites are going to miss the Tokyo Olympics, who are worried about security, logistics and the very atmosphere of the tournament.

So, Australian Nick Kiryos refused to come to Japan only because there would be no fans in the stands, without whom he would not be able to give all his best on the court.

In the men's singles, almost half of the top 20 players in the ATP rankings will not play.

Some have very objective reasons - Austrian Dominic Thiem and Belgian David Goffen will miss the Olympics due to injuries, and Bulgarian Grigor Dimitrov did not play enough matches for the national team to fulfill the selection conditions.

The rest refused to come for personal reasons.

The main loss for men is Rafael Nadal.

After losing at Roland Garros, he decided to miss not only Wimbledon, but also the Olympic Games, which he won 13 years ago in singles and five years ago in doubles.

Taking into account the fact that Tim will not perform either, the Greek Stefanos Tsitsipas and the German Alexander Zverev will join the Serb Novak Djokovic and the Russian Daniil Medvedev in the top four in seeding.

Ten days before the opening ceremony, another tennis player from the Big Three, Roger Federer, refused to participate. The ninth racket of the world has already expressed doubts about the trip to Tokyo and has now made a final decision, citing injury. He could be one of the few players to have competed in five Olympics (despite the fact that the Swiss did not compete in 2016). His collection already has a gold medal, but only in doubles - Federer lost his only final in singles in 2012. If he nevertheless decides to fill this gap in the future, then he will have to go for the Olympic title in his fifth decade.

Djokovic's participation in the Olympic tournament is not yet guaranteed either. After his victory at Wimbledon, he admitted that the latest news makes him think about giving up the Games. But if the first racket of the world really misses the Olympics, he will miss, perhaps, the last chance to achieve a unique tennis achievement - to collect the Golden Helmet. To do this, he only needs to win a gold medal in Tokyo and the US Open. Until now, only the German Steffi Graf in 1988 managed to win all five titles in one season. So far, Djokovic has not shone at the Olympics and managed to win only bronze in 2008, when he was not even a two-time winner of Grand Slam tournaments.

Although the men's tournament will miss a number of famous tennis players, this does not mean that the competition will be a failure. After all, the list of participants included the finalists of all the last four Grand Slam tournaments (with the exception of Tim), and the winner of the ATP Tour Final tournament Medvedev. At the same time, the Olympics are famous for the fact that "dark horses" often find themselves on the podium.

The current alignment before the Games is quite favorable to Russian tennis players, who only once reached the quarterfinals after Evgeny Kafelnikov's victory in 2000.

In addition to Medvedev, Andrei Rublev, Aslan Karatsev and Karen Khachanov will perform in the singles tournament.

In addition to Russia, Italy, France and the United States also earned four quotas, but almost all of their athletes are ranked below Khachanov, so at least thanks to high-quality representation, the chances of Russians for medals increase.

The rejection rate for women is much better than for men.

Although half of the first eight of the WTA ranking will not come to Tokyo, all the following athletes on the list up to the 22nd racket of the world Karolina Mukhova from the Czech Republic are ready to play, if force majeure does not happen.

Of those four leaders of women's tennis who still refused to participate, not all can be considered losses.

For example, American Sophia Kenin and Romanian Simona Halep this year never even reached the semifinals of the WTA tournaments, and Canadian Bianca Andreescu only once played in the final in Miami, in which she refused to fight the first racket of the world, Ashley Barty.

It would be difficult for them to defend their high positions in the ranking at the Olympics.

But Serena Williams' refusal should be classified as a loss, if only because of the contribution that the American made to Olympic tennis.

Together with her sister Venus, she won three Olympiads in pairs, and each of them also won alone.

Williams Sr. also won silver in the mixed doubles in 2016, but she will not be in Tokyo either - positions in the ranking did not allow the 41-year-old tennis player to qualify.

The main favorite of the women's tournament is Naomi Osaka. Although she does not live in Japan and cannot speak Japanese fluently, she perceives the upcoming Olympics as home and dreams of winning gold there. The 23-year-old tennis player did not have a good season on the ground and grassy seasons - she withdrew from Roland Garros due to her unwillingness to communicate with the press, and missed Wimbledon to prepare for the Games. But on hard, Osaka has suffered only one defeat this year, and last - only two. Hardly anyone else on this surface can show the same stable results, especially without proper preparation, which the second racket of the world just had.

Over the past season and a half, she has accumulated only five losses on hard.

She will arrive in Tokyo in the status of Wimbledon champion, which clearly indicates that the Australian is now in good shape and has forgotten about all the injuries that periodically prevent her from confirming her class.

But at the Olympics, not a single athlete can be written off.

Before the competition, she was 37th in the WTA rankings, but this did not prevent her from winning all six matches, including the second and third seeded Spanish Garbinier Mugurus and German Angelica Kerber.

For Russian tennis players, the Olympics have traditionally been going well.

Suffice it to recall how in 2008 Elena Dementieva, Dinara Safina and Vera Zvonareva took the entire podium, and in 2012 Maria Sharapova reached the final.

But this time, you should be careful with the forecasts.

Firstly, the Russian women did not manage to achieve full representation - Daria Kasatkina, who played in the last Olympics in the quarterfinals, this time will not perform for health reasons.

Secondly, on hard, neither Anastasia Pavlyuchenkova, nor Ekaterina Alexandrova, nor Veronika Kudermetova have had any significant success for a long time.

You can remember the recent final of "Roland Garros" Pavlyuchenkova or the title of Kudermetova in Istanbul, but all this happened on other surfaces.

Confusion with the Russians and the unpredictability of the mixed

The Russians still have doubles, and in it the prospects for a medal look more interesting.

Right before Wimbledon, the reigning champion in this event, Elena Vesnina, was in excellent shape.

She competed for mixed doubles titles at Roland Garros and the women's doubles tournament at Wimbledon.

True, if Vesnina will still be able to re-compose a duet with Aslan Karatsev, then with Veronika Kudermetova it is unlikely.

Vesnina was announced for the Olympics together with Vera Zvonareva, and her recent partner will play with Anastasia Pavlyuchenkova.

The Russian Tennis Federation did not take into account the wishes of the Wimbledon finalists and split them into different teams, which can either help them both prove themselves with new partners, or leave them without any chance of a medal.

However, Vesnina was unhappy with the decision to split her from Kudermetova at the Olympics in any case.

We must not forget that the layouts in doubles tennis at the Olympics largely depend on how balanced the pairs will be, which necessarily consist of representatives of the same country. There are no problems with this, perhaps, only the Czech Republic - Barbora Kreichikova and Katezhina Sinyakova not only have been performing together for a long time, but are also included in the top three of the WTA doubles rating. French women Christina Mladenovic and Caroline Garcia also performed a lot and successfully together, but the latter has long focused on singles. Many well-known partners will have to take on much less titled players as partners and try to get used to them in a short time.

The situation is similar for men, only there are much more ready-made pairs for the Olympics. These are the Croats Mate Pavic - Nikola Mektic, and the French Nicolas Mayu - Pierre-Hugues Herbert, and the Colombians Robert Farah - Juan Sebastian Cabal. Each of them is in the top eight of the ATP doubles rankings, and at the same time, all tennis players have played well with each other. If one of them is not on the podium, it will be a small sensation.

Russia will be represented by the same tennis players as in the singles tournament.

The prospects of Andrei Rublev and Karen Khachanov can be called quite good.

If it were not for success separately from each other, they could very well become a good couple.

They have played in Masters finals twice and do not miss out on practicing together in other tournaments.

But still, they will focus on the fight for personal medals, like Daniil Medvedev and Aslan Karatsev, who have almost no experience of playing in pairs at a professional level.

It is possible that Karatsev will have to play in three tournaments at once - reaching the final of Roland Garros together with Vesnina obliges him to try himself in mixed doubles.

But in the mixed category, it is impossible to say anything specific about the layouts.

The line-ups of pairs are formed already during the Olympics itself from among those participants who are ready for extra loads for themselves. Fans may dream of how to unite, for example, the Greeks Stefanos Tsitsipas and Maria Sakkari or the Poles Iga Sviontek and Hubert Gurkach, but some certainty about the mixed will come only when, at the end of the first days, one of the tennis players will be out of work. other categories.