Italy won the European Football Cup for the second time in its history after 1968, when England was denied the crown for the first time, by winning it with a dramatic 3-2 penalty shootout, after they tied 1-1 in the original and extra time on Sunday at Wembley Stadium in London. to 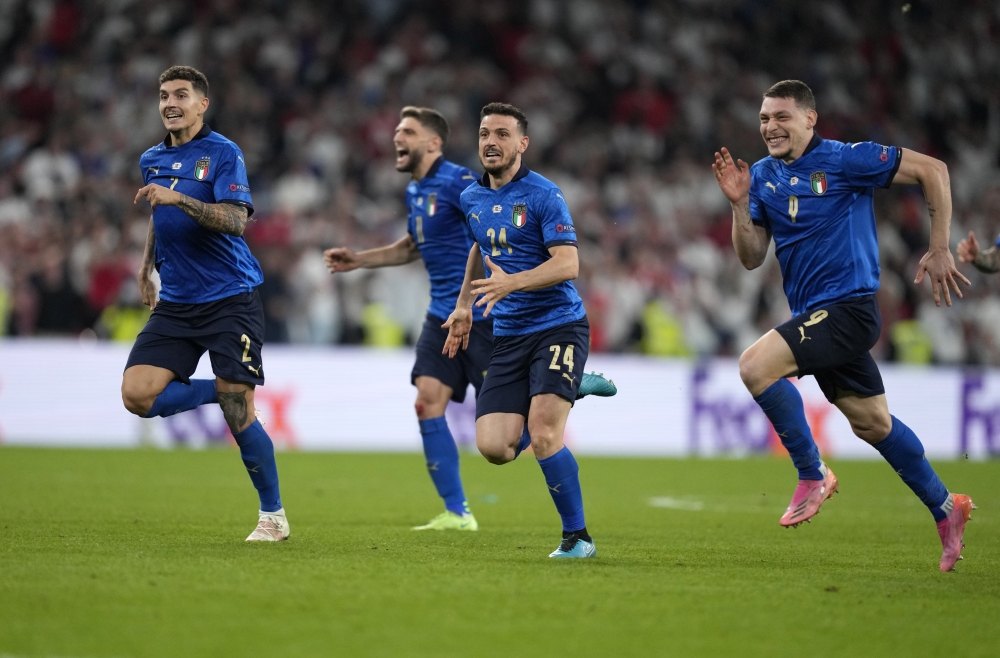 Italy won the European Football Cup for the second time in its history after 1968, when England were denied the crown for the first time, by defeating them with a dramatic 3-2 penalty shootout, after they tied 1-1 in regular and extra time on Sunday at Wembley Stadium in London.

Left-back Luke Shaw scored the surprise opening goal after one minute and 57 seconds from the start whistle, to be the fastest goal in the history of the final matches. Italy equalized in the middle of the second half after a corner followed by defender Leonardo Bonucci (67).

In the penalty shootout, goalkeeper Gianluigi Donnarumma saved two kicks to secure the title for Italy.

Italy raised the number of its major titles to six, after winning the World Cup four times, the last of which was in 2006, while England is still fasting for titles since the 1966 World Cup on home soil as well.

While about 67,000 spectators were allowed to attend, including 7,500 Italian fans, in implementation of the Corona virus protocol, hundreds of English fans tried to storm the gates of Wembley Stadium in an attempt to enter, as the atmosphere tense hours before the final, after some of them succeeded in entering without cards, according to the stadium spokesman. .

Italy consolidated its record series of 34 matches without losing (27 wins and 7 draws), preventing England from defeating it for the first time in a major tournament (the World Cup and the European Cup).

The two teams played a wonderful journey in the current finals that were held in 11 countries, as England only conceded twice and eliminated Germany from the final price.

As for Italy, which played its tenth final in the major tournaments, after the disaster of missing out on the 2018 World Cup, it played an exciting attacking game, eliminating the likes of Belgium and Spain on its way before outperforming the host of the final.

Full-back Kieran Trippier participated in the England squad, instead of young Arsenal player Bukayo Saka, to return coach Gareth Southgate to a plan of five defenders he used during the 2-0 victory over Germany in the final price.

Since that time, Trippier (30 years), player of Atletico Madrid, champion of Spain, sat as a substitute during the victory over Ukraine in the quarter-finals and then Denmark in the semi-finals.

In addition, Southgate did not change a squad led by top scorer Harry Kane, who scored the winning goal in extra time against Denmark.

On the other hand, coach Roberto Mancini paid a squad identical to the one that beat Spain on penalties in the semi-finals (4-3-3).