3 matches ignite the match between Italy and Spain tonight

The match between Italy and Spain ignites with four matches, in search of a ticket to qualify for the European Cup final, today (23:00 UAE time), at Wembley Stadium in London. The two teams met 37 times, each winning 11 times, and tied 15 match, and in the European Cup, 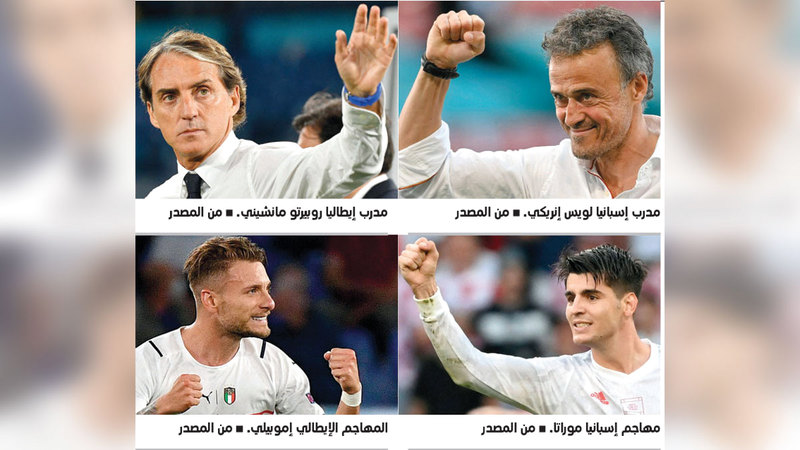 3 matches ignite the match between Italy and Spain tonight

The match between Italy and Spain ignites with four matches, in search of a ticket to qualify for the European Football Cup final, today (23:00 UAE time), at Wembley Stadium in London.

The two teams have met 37 times, each winning 11 times and drawing 15 matches. In the European Cup, Italy won twice, Spain once, and drew three times. After completing tonight’s summit, they will meet again in the semi-finals of the European Nations League at San Siro Stadium in Milan On the sixth of next October.

"Emirates Today" monitors three main axes of the great football dialogue, which will ignite the confrontation, as follows:

Spain coach Luis Enrique hopes to settle an old score with his Italian counterpart, when he was a “Matador” player in the 1994 World Cup America, he received a blow to the nose from Italy defender Mauro Tassotti, and blood spilled from him staining his shirt, but the referee Tassotti did not award a penalty kick. In favor of Spain at the end of the match, it would have dragged the two teams into extra time, and the Italian team won 2-1, at a time when the International Federation later punished the referee with an eight-match ban.

Attention is focused on the one-on-one confrontation between yesterday's friends and today's enemies, with Spanish striker Morata facing his former teammates in Juventus, Bonucci and Chiellini, who will turn into his fiercest enemies tonight. They know fully the strengths and weaknesses of Morata, and hope to stop him and prevent him from netting goalkeeper Donnarumma.

Despite the slow start of Enrique's men, and the risk of exiting from the group stage, after two draws with Sweden and Poland 1-1, they exploded against Slovakia 5-0, and this result in particular gave them the motivation to bypass Croatia in the final price, and Switzerland in the semi-finals. Roberto Mancini, who owns the magic wand that turned the "Azzurre" into a terrifying team, beat Turkey and Switzerland 3-0 and Wales 1-0, and topped his group, then topped Austria in the final price, and ranked first in the world in the quarter-finals.

It is noteworthy that Italy has achieved 13 consecutive victories, and has not tasted a loss in its last 32 matches (27 wins and five draws).

To view the latest news, photos and the most important meetings expected in the continental championship "Euro 2020",