The expert: "Properties that the others lack"

Earlier today, the national team captain Peter Gerhardsson presented the Olympic team. That Rosengård's Hanna Bennison is going to Tokyo is gratifying for Swedish football, says SVT's expert Markus Johannesson. - She has qualities that the others lack in the Swedish midfield, he says. 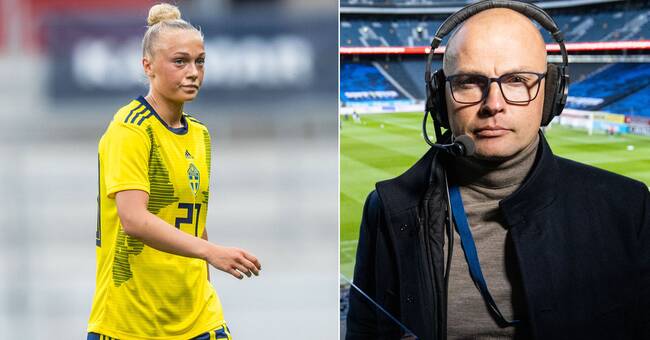 When the troupe was presented, Hanna Bennison was, according to many, one of the troupe's big exclamation points.

But SVT's expert Markus Johannesson is not as surprised.

- She has received the trust of Peter Gerhardsson, almost more than she has received from Rosengård and Jonas Eidevall this year, says Johannesson to SVT Sport and continues:

- It is a player that they see great potential in, at the same time she must deliver here and now.

She is a two-way player who is skilled offensively, but also defensively.

She has qualities that the others lack in the Swedish midfield.

She can move the ball quickly forward and takes runs into the offensive penalty area with good timing.

It is good for Swedish football that she is involved.

"Had a hard time"

Another pleasing selection is Hammarby's Madelen Janogy, who is second in the Damallsvenska shooting league.

- Janogy has returned in a very short time.

She was actually completely calculated, at least by me, last winter and when she entered this season.

But she has done very well in Hammarby and gratifyingly she gets a place in this squad.

She has had a hard time for a while, says Markus Johannesson.

One who was not present when the squad was presented was Häcken midfielder Johanna Rytting Kaneryd, who expressed great disappointment to Sportbladet.

At the same time, Gerhardsson and the staff have twisted and turned every single piece of the puzzle, and I am quite convinced that they have taken in all aspects and looked at how they can get the most out of the squad.

"Makes me lower the chances"

What does Markus Johannesson think about Blågult's chances in the Olympics, where they face the USA, Australia and New Zealand?

- The opportunities for Sweden are very good.

They are better than they have been for a very long time.

I think they have had an upward curve for a long time.

I think it will be an interesting Olympics.

- What is the break is Linda Sembrant, you must not forget that.

When Sweden has played its best, Sembrant and Magdalena Eriksson have been a very sharp midfield pair.

It is a huge break for Sweden.

It makes me lower the chances a little bit.

There must be other players stepping up there, but I'm not sure everyone is ready for that.

But the opportunities are there, there are many players who are at the peak of their careers.