What things are. Spain, who found the goal, lost the game. Actually the goal did not serve him much, just to rescue a draw that leaves him looking very bad, ... 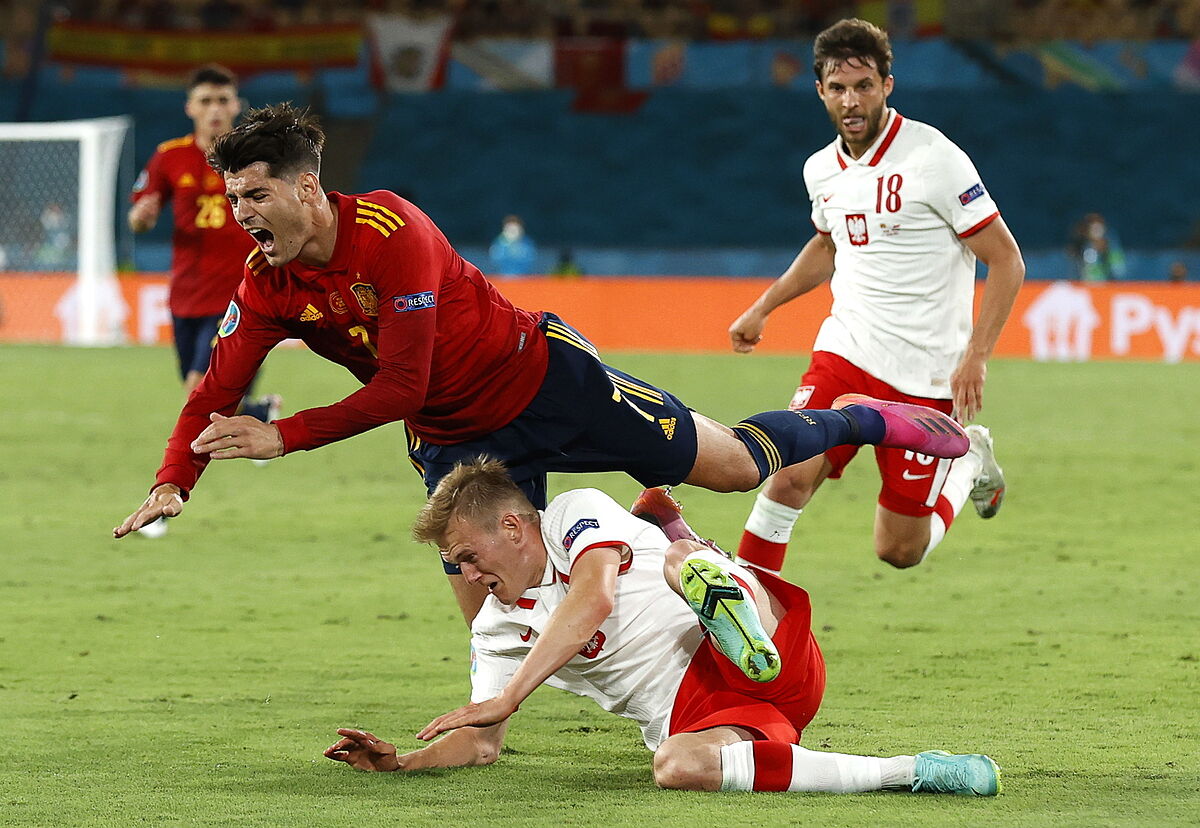 Spain, who found the goal, lost the game.

In reality, the goal did not serve him much, just to rescue a draw that leaves him looking very bad, forced to beat Slovakia if he does not want to see his continuity in the Eurocup compromised, but if after the game against Sweden the impression was that only that was missing, the goal, the feeling after facing Poland is that this team is missing something else.

Maybe not many, but capital.

For example, not fitting at the first breath.

His rival this Saturday generated him two scoring chances and scored one, so that the entire delivery that was for Spain to find that award went down the drain because of his innocence in his own area.

Spain does not look good, which only dominates the area of ​​the pitch that is between the two areas.

In them, in one and the other, it is a minor team that does not know how to handle itself.

It is not that it did not offer anything much better than against Sweden, it is that it was more imprecise, more obtuse, because when things do not go well and the competition advances, everything gets worse.

The nerves begin to appear and that is how the team started the night, to which they had put a lawn more or less in conditions and that, being able to circulate and combine better, made it worse.

Poland, a very limited team that has a big star that it barely manages to shine, started very enthusiastic. He went to press into

after five minutes who fired the first shot. In the other area, Spain could not find the roads to

either on the left, where neither

, nor on the right, where

the only change compared to last Monday.

. The difference between the two is that Gerard knows how to do a lot more with the ball. He does not have that astonishing speed of Ferran, but he associates more, he goes further inside, he appears in more unexpected places and, in short, he better shakes a defense of five like the Polish.

From a movement precisely by Gerard the goal was born, which as the week came, it was clear, it was going to be from

. The Juventus forward did everything right again. He pressed, went down to receive to unload, threw unmarked, stole balls ... All good and, in addition, he scored taking advantage of that movement from the outside in Gerard, whose shot, painful, became a pass thanks to the cunning of Morata, who appeared from behind the center to push her. With the uncertainty that the VAR offers (the assistant pointed out of the game) Spain finally uncorked the goals and finally had the horizon ahead to calm down and play more or less calmly.

He did it for a few minutes in which again Gerard Moreno had two options. The first, in a foul on the front that narrowly left him, and the second in an arrival on the wing of

that found the Villarreal forward again in an unexpected place for the centrals, who had lost sight of him. His shot at the first post was not the second of a miracle. The team seemed to live calmly, which nevertheless was about to complicate life in a bad way due to a gross error by Jordi Alba. He lost the ball in a simple situation and

hit the post. When the reject fell it, bad luck, to

Someone was already getting ready to serve the goal.

However, Unai Simón stopped her, and Spain was able to catch the break ahead on the scoreboard.

Poland had to go up, and that seemed to be good news for Spain.

What happened is that the party went crazy.

Poland went up, yes, but that to Spain was fatal, because the rival found the tie immediately in a shot by Lewandowski in which he took

, very soft against such a forward, who showed in the second half how disarm, by himself, a whole defense.

The good news for Spain seemed to be that on the next play, the VAR rescued a penalty on Gerard Moreno.

However, the striker himself sent him to the post, showing again that in the areas, Spain is not fine.

And that is serious.

and the two extremes, a decision, to remove Gerard Moreno from the field, which will surely have a very complex tactical explanation, but which for mortals was difficult to explain, the same situation when Morata left for give way to

In the last half hour Spain had several options, and some of them were very clear, but it did not find any more prizes.

And so, without managing the areas, you don't go anywhere.

Eurocopa Morata's frustration: "The next day he will still put three and shut everyone's mouths"

Euro 2021The other earthquakes in Spain: from the Cañizares colony to the Torbe case